Fukushima and the ‘Recovery Olympics’

The Japanese government’s so-called ‘Recovery Olympics’ are looking sicker by the day. Even PM Abe has finally begun to hint that the Olympics may not be able to go ahead exactly as planned. The most recent news is that the Olympic flame, will now be driven in a car around Japan, rather than carried proudly by relay runners. But even before the emergence of the COVID-19 virus, the torch relay was decidedly farcical.

The Tokyo Olympics were supposed to be a symbol to show both the world and the Japanese themselves that Japan has recovered from the earthquake, tsunami and nuclear meltdown triple disaster on 11 March 2011. Starting the Olympic torch relay from the J-Village sports stadium in Fukushima is an obvious attempt to overwrite the sad history of this venue, which was used as an emergency headquarters for over two years after the Fukushima Daiichi accident began. But this sad history will not go away. High radiation readings were recorded in several places close to the grounds by Greenpeace in October last year. Decontamination hurriedly took place in December, but TEPCO has been forced to admit that they didn’t even decontaminate the area when they returned it to the J-Village authorities.

Green sports fields have now replaced the muddy heliports and parking spaces for specialist emergency vehicles and equipment, and athletes now change into their sports gear, replacing the thousands of nuclear plant workers who once used the facilities to change out of their contaminated hazmat suits. In the words of Prime Minister Abe: “That place (J-Village), the base of operations dealing with the nuclear accident, has now been reborn into Japan’s largest holy site of soccer, filled with children’s smiling faces.”[1] Starting the Olympic torch relay from this place is supposed to be the ultimate message that the nuclear accident is now over, and can be erased from memory in the excitement of the Olympics. The situation on the ground, however, in terms of the lives of many Fukushima residents and evacuees, as well as the high radiation levels in many parts of the prefecture, tells a very different story. It is perhaps the ultimate irony that fear of the COVID-19 virus has prompted such a drastic scaling down of the event when the presence of radioactive particles has been ignored and glossed over all this time.

The Prime Minister plans to be present when the Olympic flame leaves J-Village on March 26. The world’s media is supposed to convey the image of a ‘clean, green, fully recovered Fukushima.’ The torch will be driven through 23 cities, towns and villages across Fukushima, over three days, including the towns within a 30 km radius of Fukushima Daiichi Nuclear Power Station which were ordered to evacuate after the Fukushima Daiichi meltdowns. Although the evacuation orders have been partially lifted over the nine years since the meltdowns, there are large areas which are still classified as ‘Difficult-to-return-to Zones.’ The Olympic torch will of course only be passing through the areas which have been decontaminated and where evacuation orders have been lifted. In the case of Okuma, this is only 40% of the entire district. The Olympic torch will be ‘relayed’ only 1 km through the town, along the road from the magnificent new town hall to the Joban Expressway, passing Okuma’s only convenience store, a kind of pre-fab shed that is open from 8.00 am to 6.00 pm and closed on holidays, and a ‘recovery’ housing block for the few evacuees who have decided to move back. Maybe it was hoped that residents from the nearby housing blocks for TEPCO employees would come and cheer to make Okuma look a little less like a ghost town. The COVID crisis will provide a convenient excuse for the lack of cheering crowds. 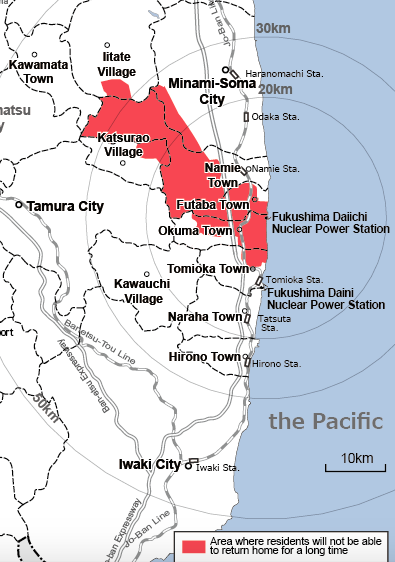 After being ‘relayed’ 1 km in Okuma, the torch will then be transported in its special van to the next ‘relay point’ at Ono Station in Futaba Town, through the ‘Difficult-to-return-to Zones’ along roads with signs that tell you to pass through as quickly as possible and not to get out of your car.

The total planned ‘relay’ route for Namie Town is 600 meters. The Olympic Torch will be driven from the ‘Robot Test Field’ to ‘Hydrogen Energy Research Field.’ The plan was to provide clean energy from here for the vehicles used for transport during the Olympics. Fukushima Prefecture’s policy of powering the entire prefecture with renewable energy by 2040 is to be applauded and I am certainly not trying to be critical of these new industries that are being developed in Namie, but by including only this 600 meters in the Olympic torch relay, we must make sure that the rest of Namie does not remain hidden in the dark. We must not forget that most of this district remains a ‘Difficult-to-return-to Zone’ and that the vast majority of its pre-2011 residents will never return to their homes, their lives and livelihoods, roots and identities, destroyed by the Fukushima Daiichi nuclear disaster.

While the torch relay route is of course limited to so-called ‘clean’ areas, where decontamination efforts, as well as natural degradation over time as some radionuclides pass and repass their half-lives, have reduced radioactivity levels, does this make them ‘safe’? A citizen’s group called Chikurin-sha, established in 2012 to monitor radioactivity after the Fukushima Daiichi nuclear accident, conducted a project to measure air dose rate as well as Cesium 137 contamination levels of soil in and around the torch relay route (the survey results are available in a Japanese pamphlet which can be ordered here chikurin.org/wp/?p=5692). The inclusion of measurements of soil contamination is what makes this is a very important survey. While the levels of external exposure to radiation (indicated by air dose rates) may not be cause for concern for athletes and spectators who would have been in the area for very short periods of time, there is a real danger of internal exposure, if for example soil particles are inhaled. In this dry, often windy season, Chikurin had recommended that all torch bearers and participants should be warned to wear masks to protect themselves from inhaling radioactive particles. Of course the authorities made no such official warnings. Maybe they were hoping that people would wear masks anyway to protect themselves from COVID19.

The results of the survey show that there are radioactive hotspots along the actual torch relay route. The most extreme one was in Iitate Village, where a soil sample taken from beside the footpath along the road where the torch will be carried, registered 2,140,000 Bq/m2. The Chernobyl Law designates four evacuation zone categories, the highest of which is 1,480,000 Bq/m2 or over. This is classified as a ‘Zone of alienation,’ where people are prohibited from living.

The survey covered 69 sampling locations in the nine districts, around the Fukushima Daiichi Nuclear Power Station, which are included in the torch relay. Of these, 21 locations were directly on the relay route. The soil contamination levels in two thirds of these 21 locations would be subject to some form of restriction under the Chernobyl Law. Even under Japanese Law (“Special Decontamination Measures Act” August 2011), it is the national government’s responsibility to decontaminate areas with an air dose rate of 0.23μSv/h or above. However, more than half of these 21 locations on the route had air dose rate readings of 0.23μSv/h or above, and this was the case for 62% of all locations in the survey. Even if the failure of the government to take responsibility for adequate decontamination does not pose serious health risks to athletes or spectators who are just there for a couple of hours, what about the people who live there? Media attention at the Olympics should also include residents who are exposed to these levels of radiation 24 hours a day, 365 days a year. As well as evacuees who, despite their living allowances being cut with the lifting of the evacuation orders, refuse this indirect coercion to move back, having being forced to restart their lives from scratch nine years ago.

It is wrong to call these Olympics the ‘Recovery Olympics.’ The government has made every effort to cherry-pick the torch relay route so it showcases new industries and new public buildings, constructed at massive cost. The radiation which remains along this route is invisible; it will not show up on the cameras. But the people who are living daily with the risks of that radiation, as well as those who cannot return to their homes because of the meltdowns, must be made visible. If we can see their reality, it will be clear that the true message of these Olympics is the exact opposite of the government PR campaign: Nuclear meltdowns wreck human lives and the natural environment irreversibly and recovery cannot be proclaimed if this reality is ignored.