The water temperature in the containment vessels and the spent fuel pools (SFPs) varies mostly around less than 32oC and no great changes have been seen. The state of releases of Xenon-135 (half-life roughly nine hours), released when uranium fuel undergoes fission is also unchanged and it can therefore be estimated that the state of the reactors is stable. Further, according to an assessment by TEPCO in December 2019, around 28,000 bequerels per hour (Bq/h) of radioactive materials were being released from the buildings (Fig.1). 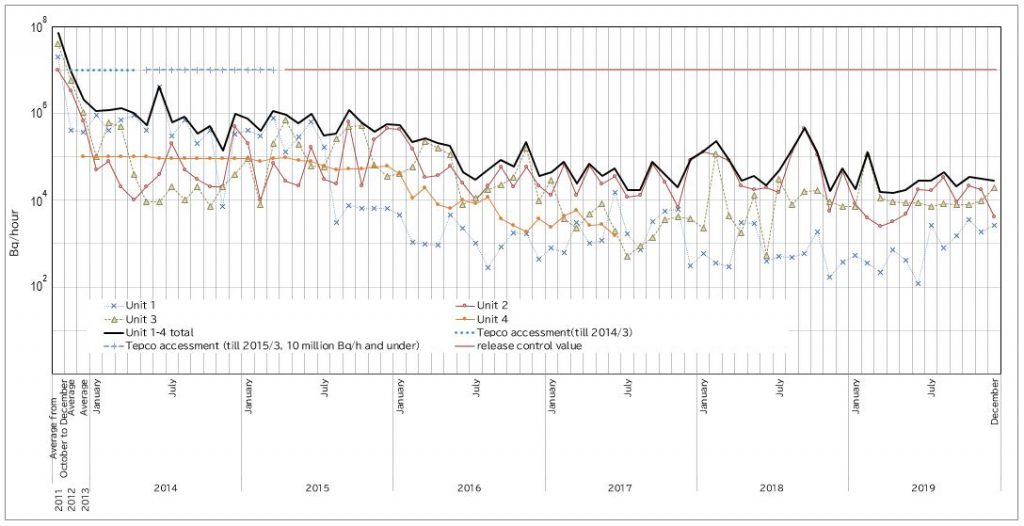 At the same time, decay heat has fallen greatly with the passage of time, and thus the volume of cooling water injected into the reactors has been reduced. To consider the optimization of procedures in possible future emergencies and so on, following experimental reduction and cessation of injected volumes of cooling water into Unit 2 in April and May 2019, similar experiments were also conducted at Unit 1 in October and Unit 3 in February 2020. The temperature rose 1oC during the eight hours while injection of cooling water into Unit 2 was suspended, and a 0.5oC rise in temperature was seen in Unit 1 during the 49 hours while injection of cooling water was suspended. The state of removal of nuclear fuel from the SFPs is summarized in Table 1. 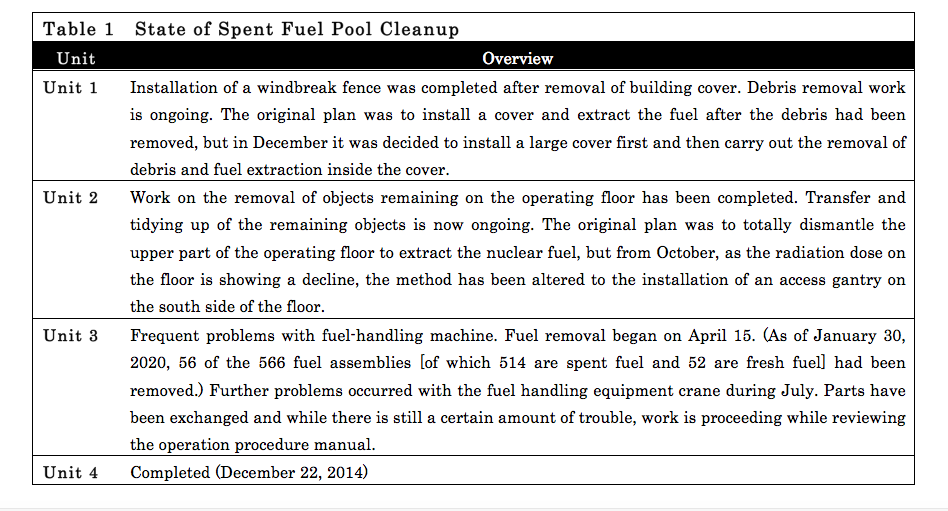 Nuclear fuel removal from Unit 4 has been completed. While multiple problems have been experienced with the equipment (fuel handling equipment crane and fuel-handling machine) for removal of spent fuel from Unit 3, removal began on April 15, 2019. (It was originally set to begin around mid-FY2018.)

Work to dismantle the upper section of the Units 1 and 2 exhaust stack, in which a fracture was discovered in a supporting pillar, began on August 1. The plan is to dismantle the 120m exhaust stack by dividing it into 23 blocks, but the work, originally scheduled for completion during FY2019, has been delayed by equipment troubles and adverse weather conditions and is now scheduled to finish in early May 2020. Additionally, tasks such as the construction of a coastal barrier as a measure against a Kuril (Chishima) Trench tsunami (first half of FY2020) and the creation of a landfill using the megafloat used to store contaminated water in 2011-12 are also underway.

Fig. 2: Change in Average Number of Workers (Actual Values) Per Day on Weekdays

Changes in the number of workers per day are shown in Fig. 2. As of December 2019, the number was 4,070, roughly half what it was at the peak of 7,450 as of March 2015. At the same time, problems originating in work mistakes are becoming more frequent at the site. TEPCO has stated that it reduced the number of workers at the site because tasks associated with contaminated water had stabilized and that the number of TEPCO staff had remained unchanged at 1,400 persons. The Nuclear Regulation Authority (NRA), however, voiced concerns, causing TEPCO to announce in October a reorganization that included the reassignment to Fukushima Daiichi Nuclear Power Station (FDNPS) of 120 staff that had been assigned to work at TEPCO’s head office until that time. However, this was simply a paper reassignment, and since the number of staff at FDNPS has not actually increased, it is uncertain whether this will lead to fundamental improvements or not.

Regarding the reduction of the toxicity of contaminated water, after removal of cesium and strontium and removal of impurities using reverse osmosis (RO), radionuclides other than tritium are removed by the multi-radionuclide removal equipment (ALPS – Advanced Liquid Processing System) and then stored in tanks (containing 1,184,858m3 as of January 23. However, due to past equipment malfunctions and operational policies, in many cases radionuclides other than tritium are present, resulting in only around 28% of the stored water being below the notification concentration). Besides this, water remaining in buildings is roughly 24,790m3, strontium-treated water, etc. is 70,848m3, water treated by RO is 9,911m3, concentrated brine is 500m3, concentrated wastewater is 9,245m3, etc.

Furthermore, on February 10, the Subcommittee on the Handling of Water Processed by ALPS, etc. considering options for disposal of post-ALPS treated contaminated water announced a final report which stated, “There are many issues … relating to injection into geological formations, hydrogen desorption, and underground burial. Technologically speaking, the realistic options are the proven ones of vapor emission and ocean release.” In the near future, the Ministry of Economy, Trade and Industry will hold consultations with stakeholders based on this report, but the overwhelming opposition to ocean release expressed at the public hearing in August 2019 is unchanged, and fisheries-related opposition is, as ever, strong. TEPCO has said that the onsite tanks will reach capacity, including the increase in the treated water in the near future, in the summer of 2022. Considering the NRA’s permission for construction and construction work for the dilution and release facility, among others, it will be necessary to obtain the consent of stakeholders at the latest by the end of FY2020, signifying that this will continue to be a very difficult timetable to work to.

The final report states, “In addition to the recommendations in this report, we trust that the government will decide on its policy with responsibility and determination while listening carefully to the views of a wide range of stakeholders, including local municipalities and producers of agricultural, forestry and fisheries products,” and “should exercise decision-making through a transparent process.” Thus far, the government, TEPCO, international organizations and others have repeatedly explained that there will be no harm from ocean release of (treated) contaminated water, but it is clear that this has not received the understanding of the Japanese people and neighboring countries, and it is hard to believe that this situation will change over the next year or so. Sticking obstinately to the current plan is nothing more than forcing the self-convenience of the schedule onto stakeholders whose consent they are unable to obtain. Further options, such as long-term storage, should be considered.