Demonstration project to compare cultivation with and without soil cover in Nagadoro District, Iitate Village

At Nagadoro District, Iitate Village, Fukushima Prefecture (a difficult-to-return zone), a demonstration project (previously reported in NIT 186) to recycle contaminated soil through agricultural regeneration is ongoing. Last fiscal year, resource crops (e.g. biomass or biofuel crops) and flowers were grown on the regenerated experimental fields. Having achieved “results sufficiently on the side of safety,” it was planned to amend a ministerial ordinance in April this year to allow the recycling of contaminated soil nationwide. However, as there were requests such as the wish to grow food crops, the amendment was postponed for the time being. It became clear that later, in August, trial cultivation using contaminated soil with no (uncontaminated) soil cover was being implemented.

What is the recycling of contaminated soil?

The Ministry of the Environment (MoE), to relieve the burden of transport to intermediary storage facilities and reduce the final volume of contaminated soil to be disposed of, has upheld the policy of using contaminated soil and other waste materials derived from decontamination in Fukushima Prefecture for public works and recycling through agricultural regeneration.1   Under the Act on Special Measures concerning the Handling of Contamination by Radioactive Materials, contaminated soil of 8,000 Becquerels/kg or less (Bq/kg – total of cesium 134 and 137) may be recycled. Thus far, MoE has said, “Recycled materials should be used in a restricted manner with appropriate management such as shielding with soil cover, protection from (wind) dispersal and runoff, and with the keeping of records,”2 The additional exposure dose from recycling materials should be kept to within 10μSv/year. In Fukushima Prefecture, however, a plan to carry out a demonstration project to recycle contaminated soil as roadbed material for a city road in Harase District, Nihonmatsu City in 2018 was cancelled due to local opposition. In 2019, another plan to recycle contaminated soil as roadbed material in Joban Expressway road widening works at Hanokura, Odaka District, Minamisoma City was also cancelled due to local opposition.

The no-soil-cover trial cultivation in Iitate Village was pushed forward by secret discussions. In July, Ryukoku University Professor Oshima Kenichi submitted a request for disclosure of administrative documents, gaining access to “The Working Group on Safety Assessment Considerations regarding Radioactive Impacts related to the Recycling of Removed Soil, etc.” and excerpts of the minutes of meetings. In the minutes of the “Survey Work related to the Removed Soil, etc. Volume Reduction and Actualization of the Recycling Technology Development Strategy” for January 15, MoE Resources and Wastes Recycling Bureau, Director’s Office for Environmental Restoration Projects, Assistant Director Ohno Hiroshi said, “As there are hopes for the cultivation of various food crops among the local people, we have implemented patterns with no soil cover that differ from the guide3, and we would like to show that there is no problem even if there is no soil cover.” In response, advice on the side of caution was given, among others, by Ishida Satoshi of the National Agriculture and Food Research Organization, NARO, who stated, “Declaring safety after one trial for each crop is highly risky,” and Manpuku Yuzo of the same organization, who stated, “Implementing after one trial cannot be said to be safe.” In spite of this, on February 19th, Vice Mayor of Iitate Village, Monma Shinichi, former head of Nagadoro Administrative District Shigehara Yoshitomo, Iitate Village Restoration Advisor Tanaka Shunichi and others were present at the 7th Iitate Village Nagadoro District Environmental Regeneration Project Operating Council, at which the no-soil-cover trial cultivation proposed by MoE was approved by the local head of the administrative district and others. On August 8th, along with the cultivation of food crops with soil cover, a demonstration project involving the cultivation of cabbages and kidney beans without soil cover was reported to the mass media.

Trial cultivations began in Nagadoro District in May this year. Raised beds (90-150cm thick) were formed using contaminated soil from Iitate Village (5,000 Bq/kg or under) as recycled material4 On these was placed about a 50cm thickness of soil cover (soil similar to pit sand) that was used to shield the contaminated soil that had been kept in temporary storage. Thickness of the soil cover was determined according to the “Guide for Recycling Soil Derived from Decontamination, etc. Methods in Fukushima Prefecture”3 to suppress additional exposure dose to 10μSv/year. Fertilizer was applied to the soil cover in accordance with Fukushima Prefecture Fertilizer Application criteria.5 Food crops, resource crops, flowers and so on were planted in the fields. Transfer of radioactive cesium to the plants was measured and analyzed. In addition, comparative demonstration trials with and without soil cover were carried out in August.

The west (outdoor)  raised bed used 281m3 of contaminated soil (averaging 2,400 Bq/kg)7 and was covered with 50cm of soil. In addition to the resource crops and flowers, the food crops turnips, cucumbers, cherry tomatoes and maize (corn) were planted in May and June to be sampled from July to September and harvested from August onward. According to the analytical results (Table 1), the cesium 137 radiation levels in food crops were 0.1 to 2.3 Bq/kg. Even for the maize, whose roots penetrated down beyond the soil cover to the contaminated soil, the cesium 137 level was 0.2 Bq/kg. Having seen these results, MoE proclaimed, “As they are all under the national standard (100 Bq/kg), there is no problem with consuming these crops as food.” Imaging plate tests were also performed, MoE giving the assessment that there were no traces seen that indicated radioactive cesium affixed to the plants.  In continuation, trial cultivation of lettuce, daikon (Japanese radish) spinach and komatsuna (Japanese mustard spinach) were conducted on the west raised bed. 521m3 (averaging 2,100 Bq/kg) of contaminated soil was used on the east raised bed. On the south side open area, trial cultivations were performed to examine the differences in the levels of radioactive substances transferred to the plants and plant development by forming plots with or without soil cover, one plot with contaminated soil with a 50cm soil cover and one plot with contaminated soil only (with no soil cover). Cabbages and kidney beans were planted in August and September, and at present the plants in the plot with no soil cover are showing better development. Sampling, harvesting and analysis are scheduled for late October to November (Table 1).

Nagadoro District Head Shigihara Shinichi said, “I feel reassured by the result (of the trial cultivations with soil cover) that the crops are fine to eat.” The opinion that, “Even if it is contaminated, wouldn’t plant development be better if the soil cover were mixed with the fertile soil from the original farmland?” was also stated. 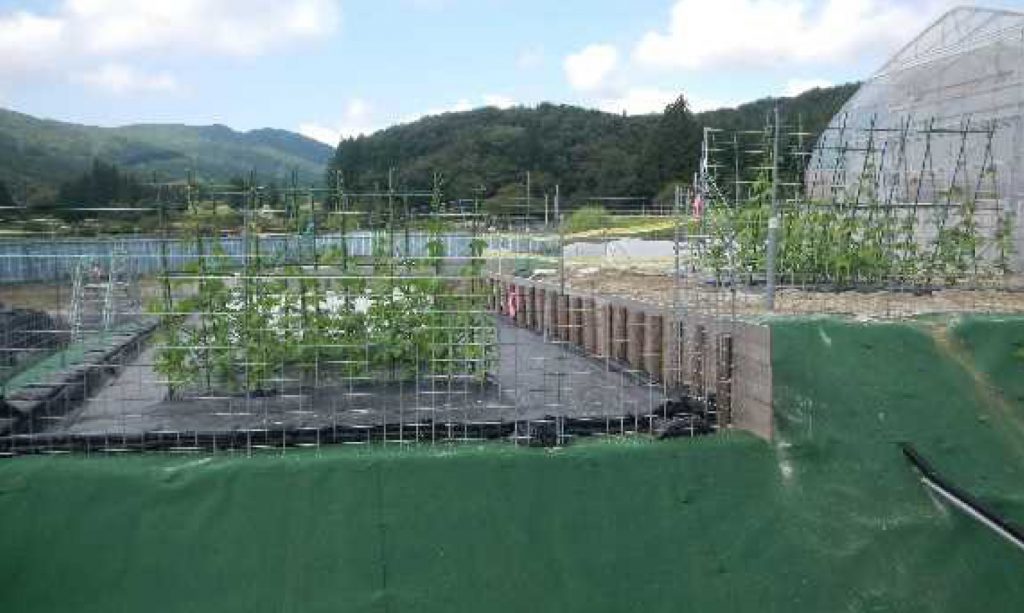 In the plot with no soil cover material, mulch and weed-proof sheet are used as measures to prevent dispersal or runoff of recycled material.

Trial cultivation without cover soil should be suspended

Even if the plant development were to be favorable, with no soil cover, radioactive substances would disperse into the environment resulting in those engaged in agriculture receiving not only external exposure from the soil surface but also unavoidable exposure from, for example, breathing in soil dust. Regarding recycling, MoE has replied that, “At the present time, given the state of the demonstration project, we are not considering recycling (contaminated soil).” However, there are strong concerns that amendments in the law will make the use of contaminated soil for farmland reclamation possible. Proceeding with trial cultivations of food crops and trials with no soil cover based on closed-door considerations is unacceptable and there is a necessity to resume the discussions once again in a public forum. No-soil-cover cultivation, which is currently not provided for under the law, results in the diffusion of radioactive substances and should therefore be immediately suspended.

References (Please note that all references are in Japanese)