The water temperature in the containment vessels and the spent fuel pools (SFPs) varies mostly around less than 35oC and no great changes have been seen. The state of releases of Xenon-135 (half-life roughly nine hours), released when uranium fuel undergoes fission is also unchanged and it can therefore be estimated that the state of the reactors is stable. Further, according to an assessment by TEPCO in June 2021, around 9,000 becquerels per hour (Bq/h) of radioactive materials were being released to the atmosphere from the buildings (Fig.1).

At the same time, decay heat has fallen greatly with the passage of time, and thus the volume of cooling water injected into the reactors has been reduced (falling from 7-10m3 per hour in May 2011 to 2.9-3.5m3 per hour in June 2021).

The state of removal of spent nuclear fuel from the SFPs is summarized in Table 1. Spent nuclear fuel removal from Unit 4 has been completed. While multiple problems with equipment delayed work in Unit 3, spent fuel removal began on April 15, 2019 and was completed on February 28, 2021 with the removal of 566 fuel assemblies, of which 52 were fresh fuel. These are now all being stored at the common SFP. Furthermore, deformed or leaking fuel assemblies have been stored in dry storage containers. The cleanup process is now roughly three years behind the scheduled completion date laid out in the first mid-term roadmap in 2011.

A drop in water level was seen in the reactor containment vessels of Units 1 and 3 in February 2021. TEPCO assumes that this occurred due to a change in damaged parts of the container vessels resulting from an earthquake on February 13. It is estimated that the water level drop in Unit 1 was a maximum of about one meter, and that of Unit 3 a maximum of about 40 cm. Unit 3 was stable at that decrease in the water level, but as the decrease in Unit 1 continued for some time, it was stabilized by increasing the volume of injected water from 3.0m3/h to 4.0m3/h. As of June, around 3.5m3/h of water was being injected into Unit 1, and the water level was being maintained at a level about 30 to 50 cm lower than before the earthquake.

Regarding the location of debris in each unit, it is estimated that in Unit 2 most of the nuclear core debris is in the reactor pressure vessel. In Unit 1, the majority of the debris appears to have leaked to the lower part of the containment vessel, and a part of it is thought to have leaked outside the pedestal (the base under and supporting the reactor pressure vessel) through an opening, where it has accumulated. A part of the Unit 3 debris still remains in the reactor pressure vessel, but much of it has been deposited in the lower part of the containment vessel. It is thought that the possibility of debris having accumulated outside the pedestal is relatively small. If the water level inside the containment vessel is allowed to fall, it is thought possible that the debris might be exposed to the atmosphere. In that case, the amount of radioactive material included in dust may increase. If water is completely lost, it is thought that the air dose rate would rise, as there would be nothing to shield the radiation. Temperature rise in the debris is also possible. However, based on an analysis of previously implemented decreases in volumes of injected water and other experiments, it is thought that temperature rises are likely to be limited.

Further, as the volume of groundwater influx has decreased, it has become necessary to decrease injected water volumes from this water source. Thus, the injected water volume to Unit 2 from July, and that to Unit 3 from August have been reduced from 3m3/h to 2.5m3/h. The plan is to eventually bring this down to 1.7m3/h. 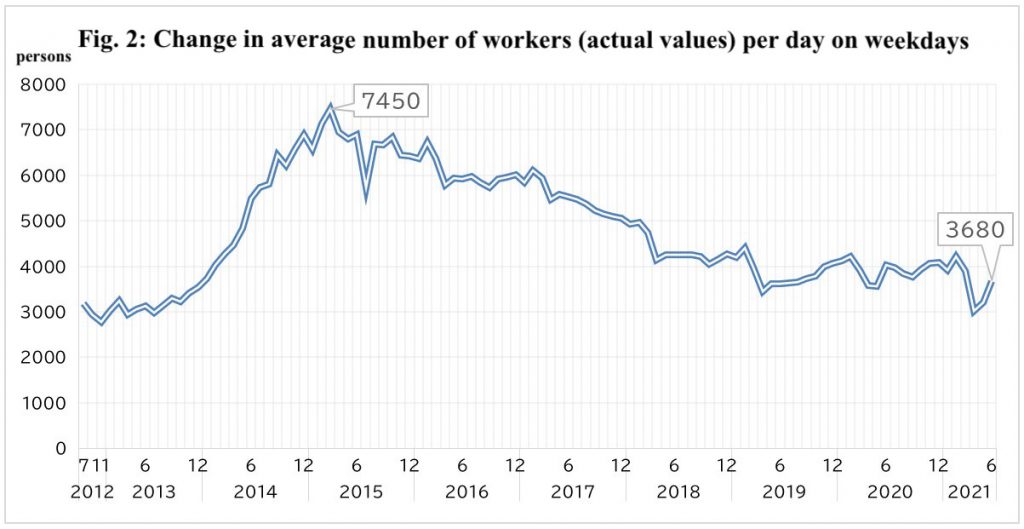 The changes in the average number of workers onsite per day is shown in Fig. 2. As of June 2021, the number of workers was 3,680. This is about half of the number at the peak. Changes in the number of cases of work non-conformance (work states that differ from the states originally intended, or acts or judgments that differ from those that should have been taken) are shown in Fig.3, as reported on the TEPCO website. As ever, problems appear to occur frequently, and this attests to the severe conditions under which work is being carried out at the site.

Regarding the reduction of the toxicity of contaminated water, after removal of cesium and strontium and removal of impurities using reverse osmosis (RO), radionuclides other than tritium are removed by the multi-radionuclide removal equipment (ALPS – Advanced Liquid Processing System) and then stored in tanks (containing 1,245,983m3 as of June 17. However, due to past equipment malfunctions and operational policies, in many cases radionuclides other than tritium are also present, resulting in only around 27% of the stored water being below the notification concentration). Besides this, water remaining in buildings is roughly 11,930m3, strontium-treated water, etc. is 19,775m3, water treated by RO is 7,461m3, concentrated brine is 300m3, concentrated wastewater is 9,380m3, etc.

On April 13, the government, in the 5th Decommissioning, Contaminated Water and Processed Water Related Countermeasures Cabinet, etc. Council, approved a basic policy of “With a target of initiating oceanic release in around two years’ time… will request preparations be made for the installation of specific release equipment, etc.” The tritium-contaminated water to be released will be diluted to a concentration of less than 1,500Bq/l. The basic policy also included a review of the upper limit of total annual tritium releases, stating, “The releases will be implemented such that the total annual amount of tritium to be released will be less than the emission control value (22 trillion becquerels/year) enforced prior to the accident at FDNPS, and will be reviewed regularly.”

The basic policy also incorporated a large number of countermeasures against “reputational damage.” For reference, the “List of Budget Projects Related to Radiation Risk Communication for Dispelling Reputational Damage” indicated by the “Countermeasure Task Force on Impacts Including Reputational Damage Due to Nuclear Disasters” shows a total budget allocation of 143.63 billion yen in FY2020 and 134.757 billion yen in FY2021. While other projects are also included in these sums, the whole allocation is not directed toward reputational damage countermeasures, but it is possible to see that a huge amount of government funds are being invested in this area each year.