UNSCEAR 2020 Annual Report: Unilateral Assessment that no Health Effects were Seen Resulting from Exposure in the Fukushima Nuclear Accident 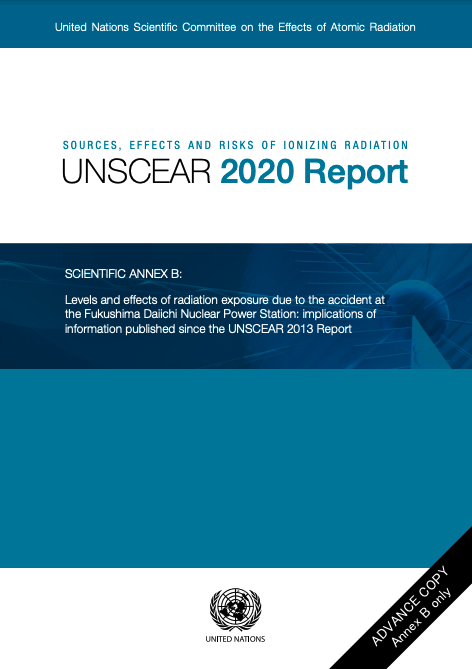 The United Nations Scientific Committee on the Effects of Atomic Radiation (UNSCEAR) 1) released its report, Levels and Effects of Radiation Exposure due to the accident at the Fukushima Daiichi Nuclear Power Station; implications of information published since the UNSCEAR 2013 Report (UNSCEAR 2020 Report Annex B) (in English, 248 pp., below referred to as “the 2020 Report”) 2) on March 9, 2021. UNSCEAR released its first report on the Fukushima Daiichi Nuclear Power Station accident in 2013 followed by white papers reflecting newly released papers and survey results in 2015, 2016 and 2017. The 2020 Report marks the tenth year since the Fukushima Daiichi nuclear accident and has been compiled with new research results. The contents comprise, among other items, assessments of the release, dispersion, deposition and migration of radionuclides to and in the atmosphere and marine environment; of the levels of exposure to the public and workers; of the health implications: and of the effects on non-human biota.

The present paper examines points that the author deems important, pointing out issues with them.

Estimating Radiation Doses to the Public

The 2020 Report reexamines dose assessments with regard to residents’ dietary habits, behavior and so on because a considerable amount of new information has come to light regarding exposure level assessment since the 2013 Report was published. As a result of reconstructing conditions closer to reality and performing the calculations again with the range of fluctuations in individuals’ radiation doses that would have resulted from taking different lifestyle configurations into consideration, the 2020 Report estimates individuals’ radiation doses one year following the accident to have been less than 10 millisieverts (mSv) and the radiation dose to their thyroid gland, less than 100 milligrays (mGy). This new assessment was less than one half as high as the exposure assessed in the 2016 Report for almost all of the municipalities considered, and in some cases, well below it. Regardless of age group, the lifetime limit exposure dose for any organ is assumed to be 15 mGy. There are said to have been no reports thus far of elevated cancer rates at that level of exposure.

The reasons for that are (1) they use an estimated formula that considers the dietary habits of the Japanese, who consume foods with abundant iodine, and (2) the 2013 Report considered internal exposures arising from ingestion of food and drinking water to be the main route of thyroid gland exposure, while the 2020 Report considers internal exposures to have arisen from inhalation of atmospheric radionuclides.

The measured values UNSCEAR was relying on, however, were data collected by 1,080 persons, limited to those taken two weeks after the accident in specified areas outside of the 30 km zone around the stricken plant, and their reliability is questionable. The radiation dosages to the people living in areas for which evacuation orders were issued, who are considered to have been exposed most seriously, were not sufficiently measured.

The Prefectural Health Management Survey conducted in Fukushima (thyroid testing of children) has found 256 cases of “malignancy or suspected malignancy” thus far, 214 of which have resulted in operations for removal of all or part of the thyroid gland (as of May 17). The 2020 Report assesses the risk of thyroid cancer from the radiation dose estimates and concludes that there is no likelihood of thyroid cancer occurring in any of the age groups considered. The reason indicated for the number of thyroid cancer cases increasing at a much greater rate than predicted is not the exposure to radiation, but rather the possibility of over-diagnosis as a result of identification using highly sensitive ultrasound equipment for screening. In addition, the 2020 Report says there is a possibility that over-diagnosis of thyroid cancer in children and young persons through Fukushima’s thyroid testing causes anxiety among those who have been tested, perhaps leading to unnecessary treatment. Moreover, it dismisses legitimate evidence of excessive occurrences of birth defects, stillbirths and premature deliveries in connection with exposure to radiation among the general public.

Regarding this, the prior state of the approximately 300,000 people who underwent the first round of testing (October 2011 to March 2013) was unknown, so the effectiveness of the screening cannot be confirmed or denied. However, of the approximately 270,000 people who underwent the second round of testing (April 2014 to March 2016) and had their thyroid tested, 71 were diagnosed with thyroid cancer whereas they had been diagnosed as healthy about two years previously, and when operated on 54 of these were confirmed as cancerous. The prior health condition of the group being studied was known this time, so the “screening effect” cannot account for the results of the second and further rounds. Also, when operated on, lymph node metastasis and penetration beyond the thyroid were seen in about 78% and 45% of the cases, respectively, and thus the testing and operations were necessary and not “over-diagnosis.” Furthermore, if screening effects and over-diagnosis were the causes of the problem, no differences in occurrence should have been seen between patients in different communities, but differences in the occurrence of cancer were seen: the higher the radiation dose, the more prevalent was thyroid cancer.

Regarding the risk of leukemia to workers, the increase in the rate of leukemia occurrence among the group of 37 workers whose exposure level was highest, maximally about 200 mGy, could not be discerned statistically because the sample size was too small.

Through the end of 2018, the Japanese Government had granted recognition of occupational illness to six workers who had performed work gathering debris (three with leukemia, two with thyroid cancer and one with lung cancer), but the 2020 Report says that scientifically, there is no clear causal relationship between radiation exposure and specific cancer cases.

The majority of workers tasked with gathering debris received effective doses of less than 10 mSv within the year after the accident, and only a small number of the workers received effective doses of 100 mSv or more. The 2020 Report concluded that the possibility of increased rates of leukemia, all solid carcinoma and thyroid cancer occurrences was low, and there was said to be insufficient information to determine the workers’ risk of cataracts.

To begin with UNSCEAR makes the assumption that no significant elevation of cancer risk can be recognized for exposures of less than 100 mSv. During the past decade, however, several research reports have been published that found increases in cancer risk from low-level exposure that are significant even at 10 mSv or less.3) This knowledge is not reflected in the 2020 Report.

UNSCEAR put out a press release for the 2020 Report titled “A decade after the Fukushima accident: Radiation-linked increases in cancer rates not expected to be seen.” 4)

Keio University Professor Hamaoka Yutaka of the Citizens’ Commission on Nuclear Energy has pointed out5) that the 2020 Report uses the term “discernible” frequently. For example, regarding the emergence of health effects it says they are “most likely not discernable.” By this, it means that even if health effects have occurred, they have not occurred in quantities that could be distinguished. If they cannot be discerned simply because their presence would be obscured by the range of error, it means in fact that cancer may be occurring as a result of the radiation exposures. By using vague terms like this, the 2020 Report leads readers to the misunderstanding that “no effects from radiation were seen.”

It seems UNSCEAR will soon announce the Japanese translation of the 2020 Report. There are many other points deserving refutation, and a need for a wide range of people involved to discuss the report and put forth further counterarguments.

1) UNSCEAR was founded in 1955 as an institution tasked with broadly evaluating the impacts of radiation on human health and the environment and reporting on them to the UN. International institutions like the IAEA and ICRP and governments around the world formulate their guidelines and laws for protection from radiation based on UNSCEAR’s reports.