On October 22, the Kishida cabinet approved the Sixth Strategic Energy Plan, which sets out the country’s medium- and long-term energy policy. The plan was submitted for public comment between September 3 and October 4, but the nearly fourfold increase in the number of comments received, roughly 6,400, up from 1,700 for the fifth plan three years ago, was effectively ignored. Moreover, the Strategic Energy Plan is drafted by a committee of experts, composed almost entirely of people with vested interests, appointed by the Ministry of Economy, Trade and Industry (METI). Citizens are allowed to submit their opinions, but with this kind of treatment they might just as well be talking to themselves.

With regard to nuclear power, the phrase “reduce dependence” was retained, but the description was changed to “make efforts to secure the trust of the public and make sustainable use of nuclear power on an as-needed scale, based on the foremost premise of ensuring safety.” This puts a stronger emphasis on the notion that nuclear power will be used.

As in the previous plan, the share of nuclear power in the power supply mix in 2030 was set at 20-22%. However, the total amount of electricity that would be generated by nuclear power plants (NPPs) has been slightly reduced due to a 10% reduction in the total amount of electricity generated (Table 1). In order to achieve this target, not only the nuclear power plants that have already been restarted, but all the nuclear power plants that are currently under safety standard review, as well as those that have passed the new regulatory standards but are as yet unable to set a restart date due to local opposition, must be restarted, and the utilization rate of restarted NPPs must average 80%. Looking realistically, the idea that the number of NPPs in operation in 2030 will increase to this degree is extremely unlikely. Furthermore, the average utilization rate in Japan has only very rarely exceeded 80%. It can only be said that this target is inordinately optimistic. 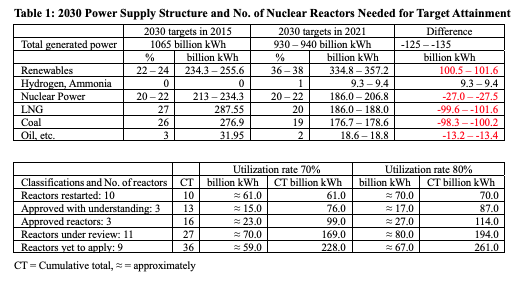 Continuing from the previous plan, there was no mention of new (both in terms of new NPPs or increasing the number of reactors in existing NPPs) and replacement nuclear reactors (replacing decommissioned reactors in existing NPPs), which had been the focus of much discussion. On the other hand, more than ever before, statements about reactor restarts and extensions of reactor operations by 20 years were conspicuous. For example, a “Restart Acceleration Task Force” was established as an initiative of the NPP operators, and by stating, “With a cooperative organization of operators, including NPP makers and others playing a central role, while enhancing maintenance activities, taking measures conducive to aging designs, managing discontinued parts, etc., various issues in carrying out long-term operation while securing safety will be examined in accordance with the roles of both the public and private sectors,” government support for industry efforts to extend operation periods to 60 years is written into the document. There is also a mention of improvement of the nuclear business environment. A particular problem is the overseas export of waste generated by reactor decommissioning. The plan considers that “For large-scale equipment, the necessary export regulations will be reviewed to make it possible to achieve operational performance, including transportation, through consignment of disposal to overseas business operators.”

The extremely high target for NPPs will be hard to achieve. However, if the amount of electricity generated by nuclear power plants is not achieved and power demand remains on target, it is highly likely that thermal power will be required to fill the gap. If this happens, it will be impossible to achieve a 46% reduction in greenhouse gas emissions by 2030 (compared to 2013). It is quite clear that there will be strong pressure to operate NPPs.

The power supply mix in the plan is based on the assumption of 20-22% nuclear power. This in itself is very problematic. With unknowns such as when reactors will be able to restart or when they might be shut down due to operational problems or earthquakes, is it not the case that they would rather be a major obstacle to the stable supply of electricity?

The situation becomes even more severe if we consider the time span up to 2050. Even if the 2030 target for NPPs were to be achieved, if we assume that the lifetime of nuclear reactors is 40 years, there will be a decommissioning rush in the few years after 2030, and in 2040 there will be less than ten reactors operating. At a reactor lifetime of 60 years, although there would be around 20 reactors operating in 2050, the number of reactors will decline rapidly thereafter, leaving only a small number operating in 2060. How will it be possible to compensate for this rapid decline in power generation from NPPs?

Nuclear power is no longer a low-carbon, stable power source, but rather an unstable power source. The measure needed for Japan’s energy policy now is to indicate a clear path to the phasing out of nuclear power generation. Nevertheless, the Liberal Democratic Party pledged in the 2021 general election to actively encourage investment in small modular reactors (SMRs) to be located underground, and to promote the development of nuclear fusion, aiming for its commercialization as “a pillar of the next-generation stable power supply.”

Thus far, TEPCO has approached Chubu Electric Power, Hitachi, Toshiba, and others about joint ventures for the Higashidori NPP, and a scenario in which Tohoku Electric Power joins the project surfaced some time ago. TEPCO has also established a KK6 Safety Countermeasure Joint Venture with Toshiba for the Kashiwazaki-Kariwa NPP.

METI is also believed to be exploring ways to consolidate and restructure the nuclear power business. In the Kishida cabinet, Shimada Takashi, former METI vice-minister, and Arai Katsuyoshi, director-general of METI’s Commerce and Information Policy Bureau (in charge of the information and communications industry, commerce, and distribution industry), have been appointed as secretaries to the prime minister. Shimada has been deeply involved in TEPCO management since the Fukushima Daiichi Nuclear Power Station accident, having been seconded to serve as a director and executive officer of TEPCO, and was appointed as a special advisor to Japan’s Nuclear Damage Compensation and Decommissioning Facilitation Corporation (NDF) even after retiring from the post of vice-minister. In an external investigation report released by Toshiba, Arai was named as the “K2 councilor” who allegedly put pressure on “obstreperous shareholders” for proposing outside directors at Toshiba’s annual general meeting in July 2020.

In terms of nuclear energy policy, the environment in which it is difficult to envision new or replacement reactors will continue. On the other hand, efforts will be made to improve the environment for the construction of new NPPs as preparations for such events. Considering the fact that the people mentioned above have been appointed to posts that will greatly influence the policies of the Kishida cabinet, it will be necessary to keep a close eye on the situation at TEPCO in the coming months and years.