The water temperature in the containment vessels and the spent fuel pools (SFPs) varies mostly around less than 35oC and no great changes have been seen. The state of releases of Xenon-135 (half-life roughly nine hours), released when uranium fuel undergoes fission is also unchanged and it can therefore be estimated that the state of the reactors is stable. Further, according to an assessment by TEPCO in November 2021, around 17,000 becquerels per hour (Bq/h) of radioactive materials were being released to the atmosphere from the buildings (Fig.1).

Preparations for the removal of fuel debris are also under way. The device for removing debris from Unit 2, developed in the UK, was originally scheduled to arrive in Japan in February, but was delayed in July due to the spread of COVID-19. Removal tests will be conducted during 2022. It is planned that an internal investigation device will be inserted into Unit 1 reactor pressure containment vessel (PCV), and a plan is now underway to withdraw water in two stages from the Unit 3 PCV and suppression chamber due to a water level drop.

The changes in the average number of workers onsite per day is shown in Fig. 2. As of November 2021, the number of workers was 3,890. That is about half the number it was at its peak. Changes in the number of cases of work non-conformance (work states that differ from the states originally intended or acts or judgments that differ from those that should have been taken) are shown in Fig.3, as reported on the TEPCO website. As ever, problems appear to occur frequently, and this attests to the severe conditions under which work is being carried out at the site. 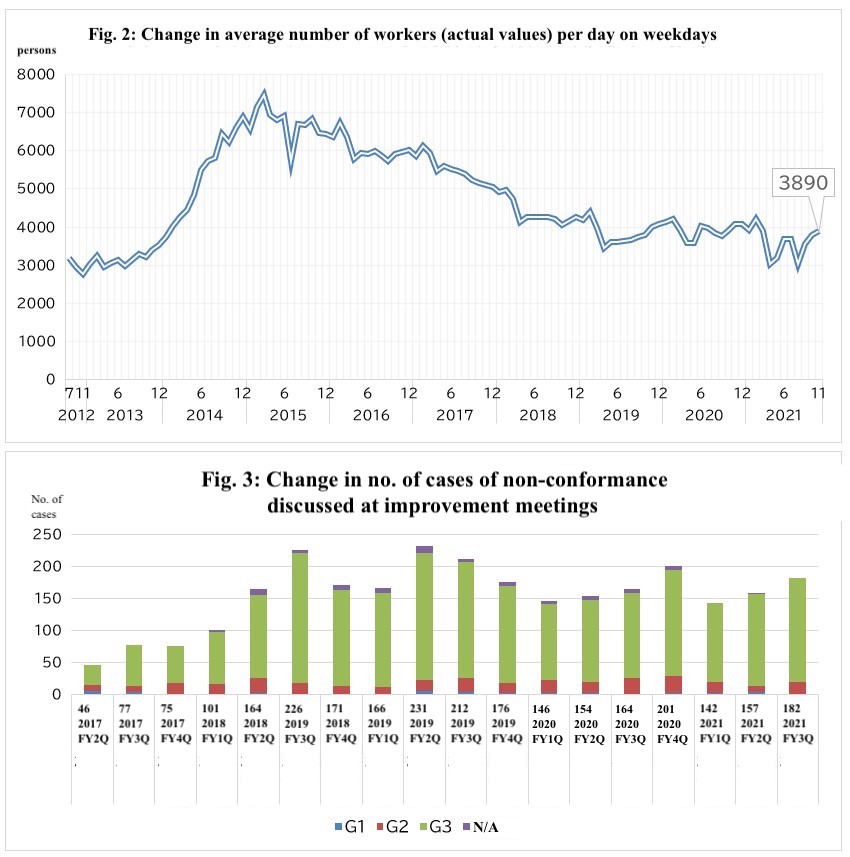 To reduce the toxicity of contaminated water, after removal of cesium and strontium and removal of impurities using a reverse osmosis (RO) membrane, radionuclides other than tritium are removed by the multi-radionuclide removal equipment (ALPS – Advanced Liquid Processing System) and then stored in tanks (containing 1,273,566m3 as of December 30. However, due to past equipment malfunctions and operational policies, in many cases radionuclides other than tritium are also present, resulting in only around 27% of the stored water being below the notification concentration). Besides this, water remaining in buildings is roughly 11,850m3, strontium-treated water, etc. is 12,812m3, water treated by RO is 9,263m3, concentrated brine is 200m3, concentrated wastewater is 9,211m3, etc.

The frozen earth barrier consists of about 1600 30-meter freeze pipes buried in the ground, through which coolant at -30°C is circulated to freeze the surrounding soil. The effectiveness of the frozen earth barrier has been questioned since it was first installed, and since 2019 there have been several coolant leakage incidents. This is due not to the technology but to aging of the equipment, which was originally not intended for long-term operation. In October, it was confirmed that the temperature continually exceeded 0°C at one location on the southwest side of Unit 4. This location intersects with the K drainage channel, in which spring water was flowing. TEPCO estimates that a part of the frozen earth melted in the process of groundwater flowing into the K drainage channel from the frozen earth barrier. Eight steel pipes were installed in December in an attempt to stop the flow of water at this location, but as this brought about no change in the spring water, nine steel sheet piles have been additionally installed.

Concerning TEPCO’s policy of releasing contaminated water into the ocean after ALPS treatment, TEPCO solicited public comments (from November 18 to December 18)* on its “Radiation Impact Assessment (design phase),” which is related to the release of contaminated water. TEPCO did not express any opinions on the submissions, and on the 21st December, immediately after the end of the solicitation period, submitted an application to the Nuclear Regulation Authority for approval of an alteration in the release of water treated by ALPS. 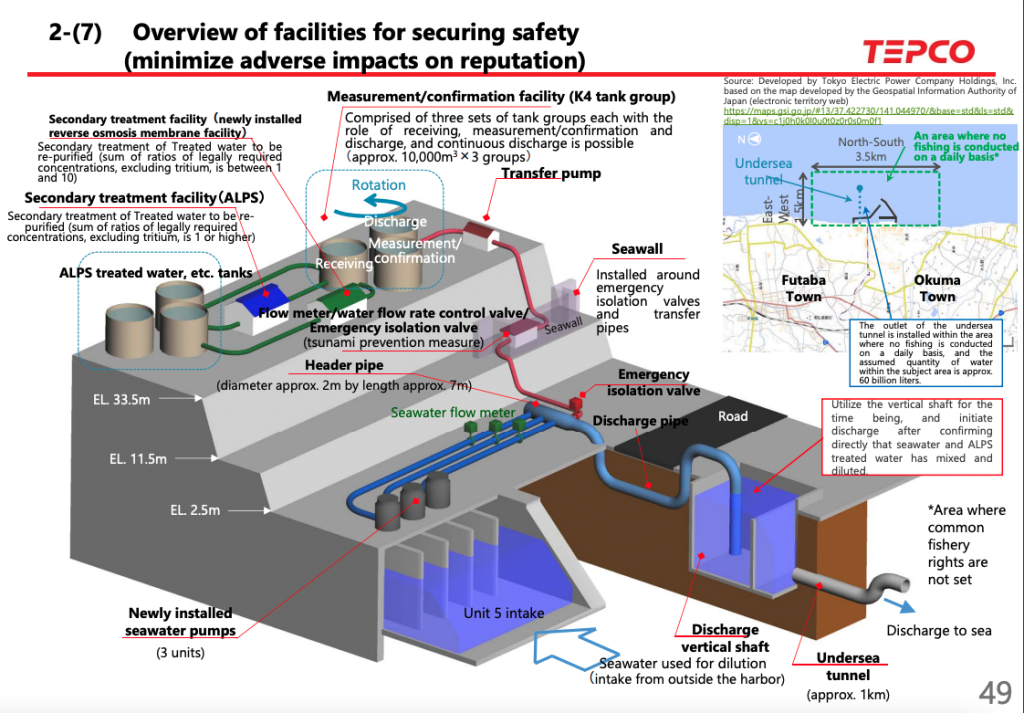 * The opinion (in Japanese) submitted by CNIC can be seen here