The Japan Atomic Energy Agency’s (JAEA’s) Tono Geoscience Center (in Gifu Prefecture) and Ningyotoge Environmental Engineering Center (on the border of Okayama and Tottori prefectures) store uranium ore and related substances (a total of 123 tons) as relics from past uranium development. JAEA has for a while been mulling over a plan to transport this uranium and related substances to the White Mesa Uranium Mill in the US state of Utah.

With support from the Takagi Fund for Citizen Science, the author, together with Tamayama Tomoyo, who has expertise regarding the state of American uranium development and the indigenous peoples of America, made a trip from March 31 to April 9 to observe conditions locally.

We also received a lot of assistance for this trip to the US from Grand Canyon Trust, an NGO working to protect the environment of the Grand Canyon and Colorado Plateau as well as the human rights of America’s indigenous people, and Heal Utah, an NGO striving to address Utah’s environmental issues. Utah, the state we visited this time, is located in the western US. Its capital, Salt Lake City, is at roughly the same latitude as Aomori Prefecture in Japan. Its area of about 219,000 km2 is similar to that of Japan’s main island of Honshu. It has a population of about 3.15 million people, about 90% of whom live in Salt Lake City or its suburbs. About 60% of the population is LDS (Mormon).

We had four main goals for this US trip. The first was to visit and hold a hearing at the White Mesa Uranium Mill and adjacent Ute tribal lands (Area C on map); the second was to observe visually the state of uranium development in Utah and its aftermath (Areas A, B, C and D); the third was to examine conditions of radioactive waste disposal (Point F); and the fourth was to hold a hearing with regulating authorities in Utah (Point E). We selected sites to visit from those perspectives.

March 31, Flight and Entry to US

I had purchased a very cheap ticket on American Airlines (to Salt Lake City via Dallas-Fort Worth) well ahead of time. At the time of purchase, the flight was to leave from Haneda Airport, but when I checked the day before departure, I was surprised to find it had been switched at some point to Narita Airport.

I needed to provide a certificate of a negative test for COVID-19 for admission to the US, but it cost several tens of thousands of yen (hundreds of dollars) to have certification issued at Narita Airport. Upon investigating on the Net, I found that it was also possible to enter the US with certification from a quantitative antigen test offered by the Kinoshita Group (ranging from free to several thousand yen) at Haneda Airport, so I made a grand detour, visiting Haneda first before heading to Narita.

My antigen test was negative, thank goodness, so I proceeded to Narita Airport (there is a direct train connection between Narita and Haneda airports now). I was a bit worried, but when I got to the airline counter and showed them my certification of negative testing (on my smartphone) and of COVID-19 vaccination, I was able to have my ticket issued with no problems. Incidentally, there was no particular effort to check my certificates for negative test results or vaccination when I entered the US.

In Salt Lake City, I met up with Tamayama-san, who had arrived earlier, and we went to a hotel near the airport. 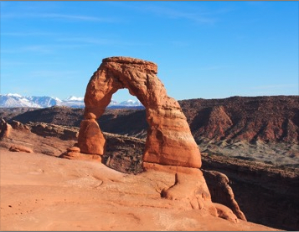 In the morning we rendezvoused with Carmen Valdez of Heal Utah, and set out first for Moab (Area A on the map). Moab is the closest town to Arches National Park, with natural scenery typifying Utah. It has simultaneously been the place where uranium development proceeded, and just outside Moab are the contaminated remains of a former uranium mill.

It takes about five hours by car from Salt Lake City to Moab, so it was already about 4:00 p.m. when we arrived in Moab. The sun does not set, however, until about 8:00 in Utah, so we enjoyed a stroll in Arches National Park.

This day, our guide was Sarah Fields, who lives in Moab, where she heads the organization called Uranium Watch. She took us to visit sites of former uranium development on the south side of the La Sal Mountains (Area B). 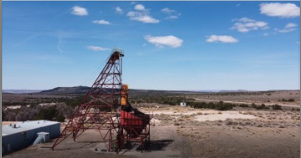 We visited the Energy Queen Mine first. This mine was operating until 1982, but after that, due to a slump in uranium prices, it ceased mining operations. Its current owner is Energy Fuels Resources Corp., who considered resuming operations once in 2009 but, but with uranium prices remaining low, that plan ultimately fizzled out.

After that, we visited the La Sal Mines Complex close by. This complex consists of the La Sal Mine, Pandora Mine, Beaver Shaft and Snowball Mine. It originally had a different owner, but is currently owned by Energy Fuels Resource Corp. 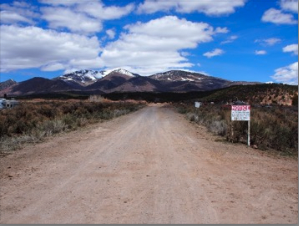 Entranceway to the Beaver Shaft

First, we had a look at the Beaver Shaft. Perhaps it is because it has currently discontinued operations, but very interestingly, it also includes a ranch, with cattle roaming around the uranium mine tailings. There is a gate at the entrance with signs posted prohibiting unauthorized entry. Incidentally, there is an elementary school and post office nearby. Office entrance and piles of tailings 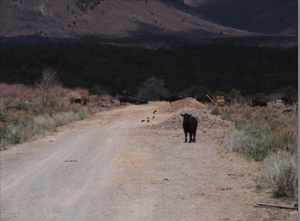 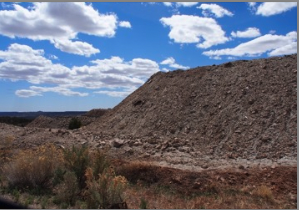 After that, we continued on for about another kilometer to see the La Sal and Snowball mines. There are fences along these mines’ site boundaries, but the tailings were piled up along the road. The air dose rate near the entranceway to the facilities was 0.3 to 0.4 μSv/h. When measured near the tailings, the dose rates were relatively high. There were no signs at all of any attempt to manage these tailings, nor were there any warning signs or other indications. We were amazed that a place like this that could be easily accessed was not being managed.

After that, we returned to Moab, and went to see the former site of the Moab uranium mill, which processed uranium from 1956 to 1984. The owner went bankrupt, so currently, the Department of Energy is carrying out decontamination work (Moab UMTRA Project). As shown on the billboard, the wastes being generated by the decontamination work are being transported by train the 40-kilometer distance to Crescent Junction for final disposal. This is scheduled to be completed in the 2030s. 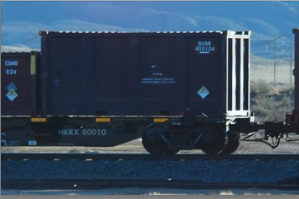 Later, when we passed through Moab on our return trip to Salt Lake City, we encountered one of the trains carrying wastes. 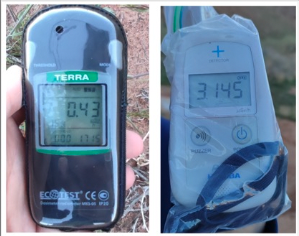 Air dose near the boundary of the Moab uranium mill grounds

When we measured the air dose rate near the boundary of the Moab uranium mill site, the readings on my air dosimeter (MKS-05 “TERRA” Bluetooth, produced by ECOTEST) and Tamayama-san’s (PA-1000 Radi, produced by HORIBA, Ltd.) differed greatly. We thought this was due to the GM tube in the “TERRA” and the Nal scintillator in the Radi but this did not happen at other sites. There were signs warning of radioactivity along the site boundaries. 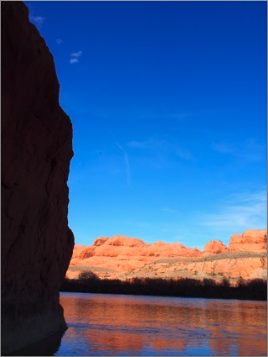 The uranium mill site is along the Colorado River, and the area around it has vertical rock-climbing cliffs, campgrounds, indigenous rock art and other tourist attractions. We were amazed at the extreme juxtaposition of the ordinary and the extraordinary.