Research by CNIC has discovered that the FY2021 share of the general contribution paid each year by the major power companies, including TEPCO, along with the Japan Atomic Power Company and the Japan Nuclear Fuel Limited (a total of 11 companies) to the Nuclear Damage Compensation and Decommissioning Facilitation Corporation (hereafter “Corporation”) in order to defray compensation and other costs related to the 2011 Tokyo Electric Power Company (TEPCO) Fukushima Daiichi Nuclear Power Station (FDNPS) accident, has been reduced by 29.3 billion yen by the Corporation and the Ministry of Economy, Trade and Industry (METI), with no explanation to Japanese citizens.

Japan’s nuclear power damage compensation system imposes a no-fault, unlimited liability on nuclear operators for accident compensations. As funds for this, the Japanese government mandates that the nuclear power operators take out insurance and so on against incidents in which they may be liable for compensation (Fig.1). However, the amount covered by this system is 120 billion yen, a figure far too small to pay out the compensations arising from the 2011 TEPCO FDNPS nuclear accident. 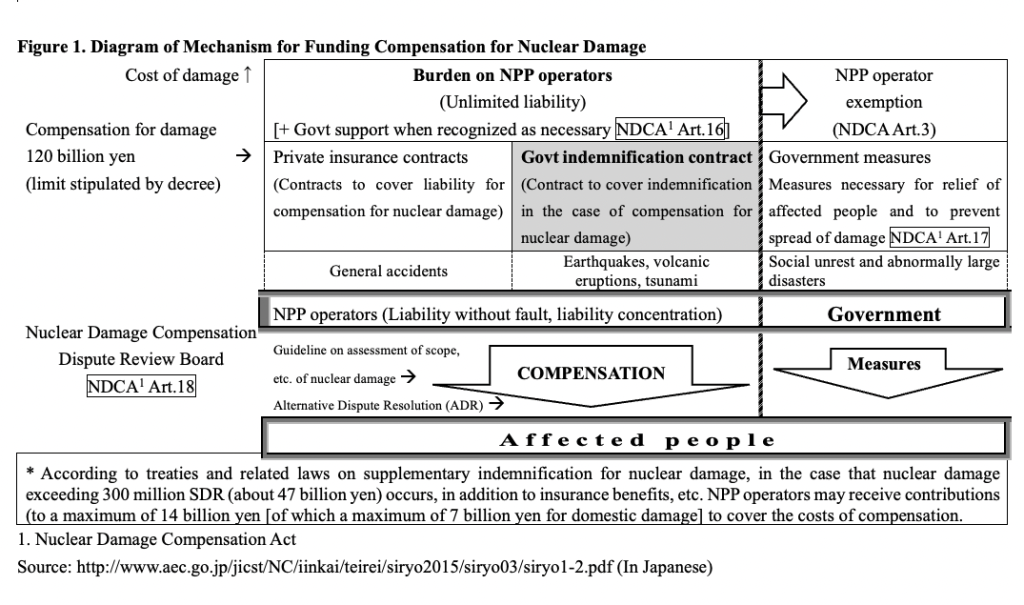 The government therefore established the new Corporation as a mechanism for the government to lend the costs necessary for the decommissioning of the crippled reactors and compensations (Fig.2). 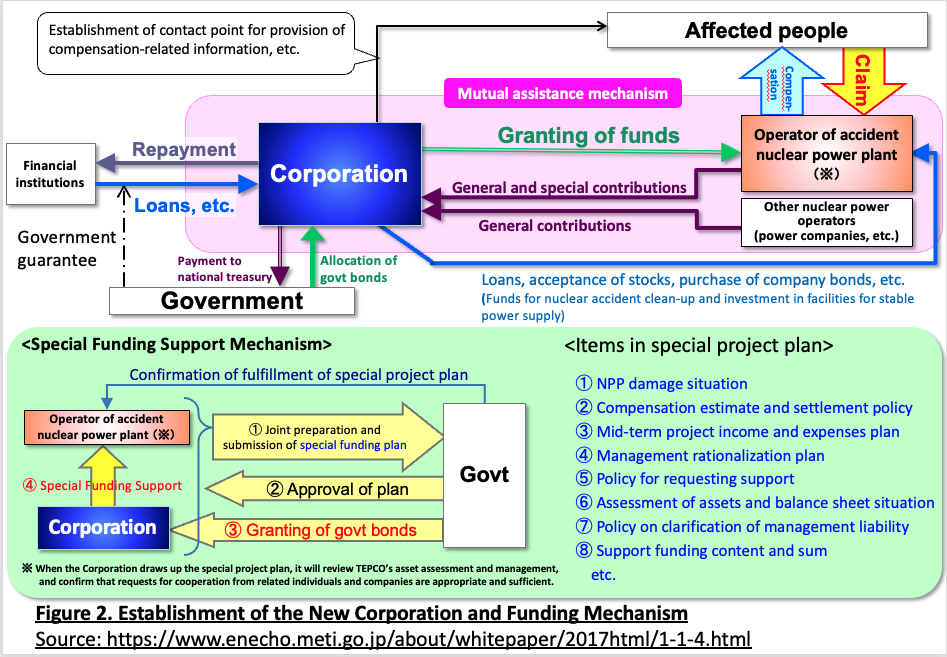 The government bonds issued and allotted to the Corporation by the government to cover the costs of compensations, decontamination and interim storage of radioactive materials amounted to 13.5 trillion yen, the breakdown of which is as follows:

– 1.6 trillion yen in interim storage costs (paid by the government).

The amount of the general contribution and the contribution ratio are determined each year by the Corporation’s operating committee and approved by the METI Minister. Each year up to FY2019, however, the 163 billion yen total contribution, determined on the basis of the profit levels of the major power companies prior to the nuclear accident, was allocated according to the capacity of the facilities held by each of the companies (Fig.4). 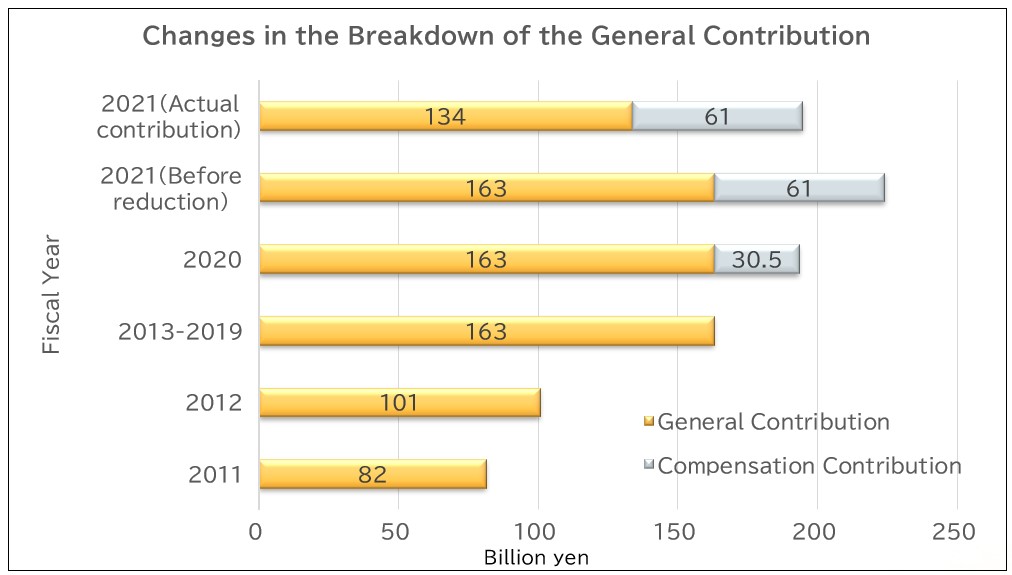 Compensation costs, as noted above, have risen by 2.4 trillion yen from 5.4 trillion yen to 7.9 trillion yen. To accommodate this increase, the general contribution up to the time of the nuclear accident was added onto the consignment fee (a power line user fee included in the power rates for each household, etc.) as a mechanism to recoup the costs (contribution for compensation) over 40 years (approximately 60 billion yen per year) for the purpose of having customers of power companies other than the major power companies also bear the costs, the logic for this being that the general contribution originally “had to be levied from the time commercial NPPs began operating in FY1966.” Recouping costs that were not, for some reason, included in the cost price in the past, regardless of whether or not there was any consumption, is totally unthinkable as a normal commercial act. While the retailing of electrical power has been liberalized, it has only been possible to introduce this system due to the recognition of a monopoly on power transmission and distribution.

A written question was submitted by Lower House Representative Yamazaki Makoto (Constitutional Democratic Party of Japan) to confirm this fact. The reply from the government stated that the contribution received from the major power companies was “163 billion yen in 2020 and 133.7 billion yen in 2021, the difference in the sums being 29.3 billion yen.” Moreover, a summary of the minutes of the Corporation’s operating committee contains a comment from the major power companies to the effect that the business situation is difficult due to an intensification of competition, etc.

This reduction in the amount of the contribution has broadly the following four issues. 1. While imposing on the citizens of the country a “past contribution” that would be unthinkable in normal commercial acts, the ones who should be footing the bills, the major power companies, are having their share of the contribution reduced behind the scenes. 2. Estimating the degree of the reduction for each of the 11 companies, it seems that, overall, each of them is now paying about 80% of what they did prior to the reduction. Nevertheless, the Chubu Power Company’s contribution has risen to 102.8% of what it was before. As Chubu Power Company decommissioned Units 1 and 2 of their Hamaoka NPP before the nuclear accident, their contribution was lightened at the time of the determination of the contributions in 2011. If this reduction has been cancelled, one could say that a penalty has been imposed on them for decommissioning their reactors. 3. With the exception of Hokuriku Power Company and Chugoku Power Company, the other seven major power companies have included the general contribution prior to the reduction in the cost price of their power. That is, the customers of these power companies have had the general contribution added onto their power rates. The total reduction for the remaining six companies who have had their contributions reduced this time amounts to 25.8 billion yen. These six companies are treating the reduced amounts as company profits while billing their customers for the general contribution. 4. The issued government bonds are non-interest bonds, but when they are redeemed, the government will borrow the funds from banks and others to hand over to the Corporation. The interest and other costs payable at that time will come from the national treasury, which means from taxes. The auditor’s report for 2017 estimated the burden on the government of the interest payments to be somewhere in the order of 131.8 to 218.2 billion yen. If the general contributions are reduced, the repayment period will be longer, causing the burden of interest payments and other costs to rise.

When the legal amendment adding past contributions to the consignment fee was carried out, the House of Representatives Committee on Economy, Trade and Industry attached an ancillary resolution stating, “Steps shall be taken to enable third-party checks, such as full information disclosure, etc.” It is unacceptable that the Corporation and METI are making these kinds of deceptive reductions in contributions.