Dumps and Museums, the Legacy of a Nuclear Disaster

On June 17–18, 2022, I participated in the overnight fieldwork tour to Fukushima organized by the Sayonara Nukes 10 Million People’s Action. Twenty-one participants visited facilities associated with the Fukushima Daiichi Nuclear Power Station (FDNPS) disaster by bus and listened to the voices of people affected by the disaster. I would like to report on the tour in this article.

Departing Tokyo on the morning of June 17, the bus carried us to our first destination, the landfill site of government-specified wastes, located in the suburbs of Tomioka Town, Futaba District, Fukushima Prefecture. This site, which used to be a waste dump site named Fukushima Eco Tech Clean Center, was nationalized by the Ministry of the Environment Japan in 2016 and began to accept government-specified wastes in 2017. Delivered to the site among the specified wastes are the ashes generated by the incineration of sewage sludge, pasture grass and rice straw, as well as daily wastes from the eight municipalities in Futaba District. The radioactive contamination of the ashes is required to be between 8 and 100 kilobequerels per kilogram (kBq/kg). Contaminated soil gathered by decontamination work is not delivered here. This landfill site is scheduled to be used for six years for the specified wastes and ten years for the daily wastes from the municipalities. Radioactive air dose monitoring is planned to be continued after the landfilling at this site is completed. As of May 2022, the site has accepted 230,000 flexible container bags of wastes.

This landfill site was equipped with measures against water leakage, such as impermeable sheets laid on the ground before the landfilling, and a leachate control tank and treatment facility. Radioactive air dose monitoring was also installed. This type of landfill site is called a controlled disposal site. Another type of landfill site, a shielded site, has a concrete pit to prevent contact between water and wastes and is thus superior in radioactive substance shielding performance. The specified waste landfill sites outside Fukushima Prefecture are planned to be shielded sites. I wondered why these controlled disposal sites are only built in Fukushima Prefecture. Our next destination was the TEPCO Decommissioning Archive Center, located in downtown Tomioka. The Archive Center exhibited not only information about the decommissioning of FDNPS; the cause of the disaster, damage compensation issues, and the operator’s responsibilities for the restoration of the local area were also explained. The exhibits were superficially apologetic, skipping all the information that could be disadvantageous to TEPCO. The cause of the disaster was explained as the failure of the company to predict such huge tsunamis and to provide preventive measures. The exhibits did not tell the truth — the governmental Long-term Assessment in 2002 estimated such tsunamis and earthquakes, and litigations against the company are ongoing over the assessment. To emphasize how TEPCO acted immediately after the occurrence of the disaster, a video was being screened, in which Ishikawa Masumi, director and assistant to Yoshida Masao, who was then the Fukushima Daiichi plant manager, was being interviewed. Mr. Ishikawa stressed that plant staff, having a strong sense of responsibility, made their best efforts to deal with the disaster, referring to the film Fukushima 50. However, if they had followed TEPCO in-house manuals, they could have announced the occurrence of meltdowns three days after the disaster, but they did not. The meltdowns were hidden for five years. The “worst-case scenario” by the Japan Atomic Energy Commission, which suggested that 30 million people living within a 250 km radius around the plant would need to evacuate if the disaster went out of control, was not mentioned. Exhibits about decommissioning did no more than justify the existing roadmap, in which the completion of decommissioning is scheduled for thirty to forty years in the future. For fuel debris retrieval, the submersion method turned out to be unpractical and the dry method has been employed, but it was not explained in detail just how technically difficult it might be to retrieve the debris. For the problem of contaminated water, exhibits took it for granted that the water would be discharged into the sea. It was not mentioned that the company is breaking the agreement with local fishermen in Fukushima; the operator simply declared that they would be ready to pay compensation if losses occur due to possible rumors about the contamination of seafood. There was no sign of remorse on TEPCO’s part found in these expedient exhibits. 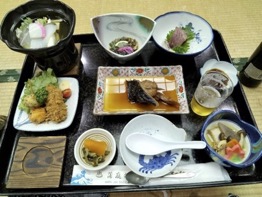 A meal at the hotel

After the visit to the TEPCO Decommissioning Archive Center, we moved to the Japanese-style hotel in Soma City, where we lodged. The hotel owned rice paddies, and we were served rice that had been harvested there. It was delicious. 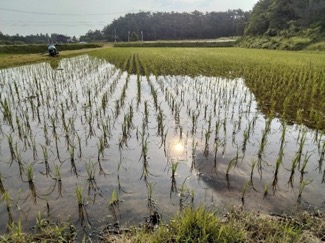 On the next morning, I woke up early and had a walk around the hotel. The morning sunlight was beautifully reflected in the paddies, and I found pretty frogs and dragonflies living there. The dose rate was 0.048 μSv/h, which was no higher than the dose rate before the disaster.

Frog and dragonfly near the rice paddy

After leaving the hotel in the morning, we joined Watanabe Hiroyuki, a guide from the Obori Soma pottery, a traditional craft industry in Namie Town. Firstly, the group visited the Great East Japan Earthquake and Nuclear Disaster Memorial Museum in Futaba Town. 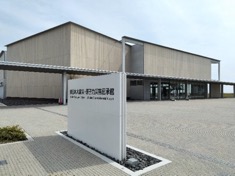 This museum is run by Fukushima Prefecture. The museum placed stress on local efforts to restore the area, rather than the tragedy of the disaster or the seriousness of the damage. As an example, a video showed a schoolteacher, who said: “After the disaster our children became strong and kind.” A research paper says more than 30% of the evacuees suffer from post-traumatic stress disorder. We were not able to hear any of the voices of such sufferers who might enable visitors to imagine the severe experiences they had. Concerning the increase in the number of thyroid cancer cases, only the researchers who deny the relationship between cancer development and radioactive exposure were introduced. The exhibit describing the Fukushima Innovation Coast project emphasized only positive-sounding aspects, and the voices of locals who remain unconvinced of the advantages of the planned facilities were not introduced. The exhibit indicated that the number of temporary dwellings for evacuees is rapidly decreasing, while voices criticizing the cessation of housing subsidies for evacuees outside officially-specified areas was not mentioned. People’s voices asserting evacuation as a human right, the voices pursuing TEPCO’s responsibilities, the sorrow of losing their hometowns, and the voices demanding compensation for the loss of their hometowns were almost totally ignored. Only the voices that suited the narrative of the restoration planned by the national and prefectural governments were presented. Not only we but also Mr. Watanabe, the guide, lamented the exhibits. Shouldn’t the museum present “memories” in such a manner that the tragedies of the nuclear disaster can be understood, that the memories can be handed on to the future, and that visitors will be encouraged to create a society independent of nuclear power generation?

The evacuation order was only lifted from the area that hosts the museum in 2020, but the dose rate on the premises was 0.03 microSieverts per hour (μSv/h), which suggested that decontamination work had been thoroughly carried out. 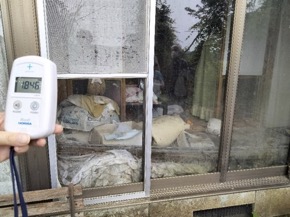 The dose rate in Obori was 1.84 μSv/h, highest in the tour

After the museum, we visited the Obori Soma pottery area in Namie Town. All the residents in this area evacuated after the disaster. We visited a building where the Shunzan Kiln brand potter of the Obori Soma ware used to live and work. It was miserable. The place remained as it was when hit by the earthquake. The clock had stopped, indicating the time of the earthquake, pottery ware had fallen down and broken, and cracks ran along the floor. I spontaneously felt anger about the nuclear disaster welling up inside me, as I realized that the lifestyle that had been passed down for hundreds of years had been completely shattered. Air dose rates at the site were between 1.5 and 1.8 μSv/h, higher than at any other sites we visited during the tour.

According to Mr. Watanabe, there had been 21 kilns here before the disaster, but all of them were ruined. Fourteen potters rebuilt their kilns in the areas to which they migrated. Although the soil in the Obori area can no longer be used, they carry on the Obori Soma pottery craft, procuring soil from other areas. While the damage remains unrestored, the people who evacuated continue to make efforts to maintain their traditions.

Our final destination was Nagadoro in Iitate Village, where the soil collected by decontamination work is being used in a pilot recycling project. The evacuation order used to be applied to the entire Iitate Village, but it was lifted at the end of March 2017, with the exception of the Nagadoro district, which remains a difficult-to-return zone due to high air dose rates. In April 2018, the governmental “reconstruction and restoration plan” was approved for “specified reconstruction and restoration bases,” which included Nagadoro. In November of the same year, the Ministry of the Environment launched a pilot soil recycling project in Nagadoro, which consists mainly of two projects: a soil recycling yard and farmland development, and pilot agricultural produce farming. The upper radioactive concentration limit established by the government is 8 kBq/kg for the soil used for recycling, but when the soil is used for a mound to build farmland, the upper limit is 5 kBq/kg. Accordingly, the radioactive concentration of the soil in flexible container bags sent to the recycling yard development here was under 5 kBg/kg. The soil in the bags was firstly tested for radioactive concentration by means of an instrument called a Truckscan®. Soil that passed the test was unbagged by water jetting. It was then cleared of large objects and metal strips, mixed with property changing material as appropriate, sifted, and used as recycled material to produce a mound on which to build farmland. In the pilot agricultural produce farming project, the radioactive soil that has been gathered from decontamination work and has been through the recycling yard is used to build a mound. The mound is covered with a layer of soil no thinner than 50 cm to further reduce radioactive exposure. When we visited the project site, only flowers, such as eustoma, hydrangeas and roses, were cultivated and no produce was seen. According to data, the radioactive cesium concentration of the produce harvested in the fiscal 2020 and 2021 years was between 0.1 and 2.5 Bq/kg. The area for flower cultivation was small, but mound construction was underway in a remaining large area of ground, and I expected that flowers would be cultivated on a greater scale in the future. It is unknown whether people in Fukushima or Japan want such soil recycling. The project is proceeding without any kind of social discussion. I find such a situation highly problematic.