CNIC Participation in the Nuclear Energy Subcommittee: Even More Subsidies!?

In the last Edition of NIT, CNIC staff member Takano Satoshi reported on the Radioactive Waste Working Group, which he is a member of. As Takano explained, post-Fukushima especially, government committees can no longer ignore dissenting voices on nuclear power and CNIC has been offered seats on nuclear-related government deliberative committees. Continuing in this series of inside reports of government committees, CNIC Bureau Chief, Matsukubo Hajime, who sits on the Innovative Reactor Working Group, which is also part of the Nuclear Energy Subcommittee (see organization chart), reports on the discussions he has participated in. 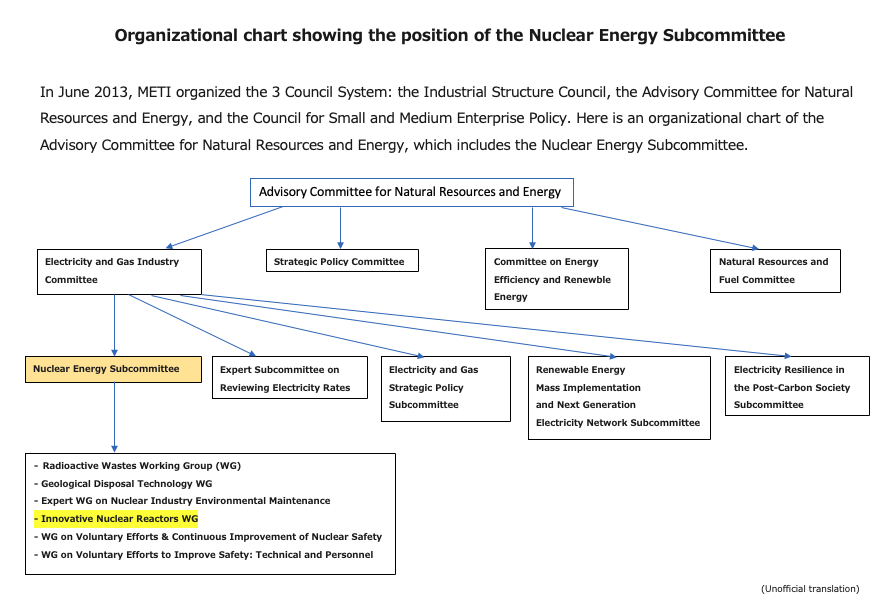 The first meeting of the Innovative Reactor Working Group was held on April 20, 2022. The theme was “The Development of Innovative Reactors.” The discussion was focused mainly on evaluation criteria based on policy issues and explanations regarding the state of both development and the industry from the Ministry of Economy, Trade and Industry (METI) and manufacturers. While other committee members also raised various points regarding the evaluation criteria, Nakaguma Tetsuhiro, expert committee member and chairperson of the Federation of Electric Power Companies, in particular said that the most crucial evaluation criterion was ensuring safety, and alongside that the predictability of projects is important. I could not help but feel the complacency of business operators when Mr. Nakaguma said that technical feasibility, regulatory requirements, highly reliable economic evaluations, and guaranteeing investment recovery are all very important to achieve this.

I put forward the following four points. (1) Innovative reactors will make no contribution to the target of a 46% reduction in carbon emissions by 2030. The same goes for the 2050 target of carbon neutrality. It is also claimed that hydrogen can be produced inexpensively in high temperature gas reactors. For example, one high temperature gas reactor with an output of 600,000 kW can produce roughly an annual 20,000 tons of hydrogen, while it is thought that the demand for hydrogen in 2050 will be 20 million tons. What is technically possible is quite a different story from what the social impact will be. (2) In overseas markets, the sales point for most small reactors is commoditization due to mass production and cost reduction. Improving the domestic production rate is also a major issue. To what extent is Japanese technology for large-scale light water reactors required? (3) The companies say that the cost of innovative reactors can be reduced to become competitive with other power sources through the honing of technical proficiency, but it is not clear whether this is realistic. (4) Who will bear the cost of nuclear security?

At the same time, I once again commented on the reconsideration of the sustainability of the entire nuclear fuel cycle, which was strongly requested at the 24th meeting of the Subcommittee on Nuclear Energy held on February 24.

26th Meeting of the Subcommittee on Nuclear Energy

The 26th meeting of the Nuclear Energy Subcommittee was held on May 10. The theme this time was nuclear fuel cycle policy and the final disposal of radioactive waste. METI and business operators explained in outline that they are working hard to promote the nuclear fuel cycle and will continue to do so. Many members expressed support for the promotion of the nuclear fuel cycle from the viewpoints of energy security, reduction of waste volume, and a recycling-oriented society. On the other hand, some members of the committee, including myself, expressed the view that the nuclear fuel cycle should be reexamined (from both the promotion and opposition sides). Murakami Chisato of the Nihon Association of Consumer Specialists (NACS) and I also pointed out that direct disposal options should be considered.

It is well-known that, theoretically, it is possible to use plutonium and other materials and reduce the volume of waste by repetitive reprocessing, or by using a fast reactor or an accelerator. However, there is a huge gap between theory and reality. How much time and money, I asked, are you planning to invest in this? As long as nuclear power generation is an economic activity, despite claims that it can be done, I think it is quite obvious that there are many reasons why the nuclear fuel cycle will fail. Reprocessing also releases large amounts of radioactive waste into the environment. Far from being any kind of recycling, what it really does is shower the environment with waste.

I could not avoid a wry smile when, in response to almost all of the comments from the committee members, the Director of the Nuclear Facilities Development and Nuclear Fuel Cycle Industry Division said, “We will do our best.” On the other hand, when I pointed out that it was strange that the Nuclear Reprocessing Organization of Japan, which is the operator of the reprocessing project, had not given an explanation, and requested that the organization explain the financial basis, etc. of the nuclear fuel cycle, I was told that I should look at the organization’s website. This strengthened my earlier impression that the organization had created the website to hide what METI did not want to explain.

The second meeting of the on Innovative Reactor Working Group was held on May 19. The theme was “The Value of Innovative Reactor Development Based on Social Trends in Energy (Contributions to Energy Security and Solving the Waste Problem).” In addition, the US TerraPower (fast reactor development) and NuScale Power (small modular light-water reactor development) explained their respective reactors, and Prof. Takeshita Kenji of the Tokyo Institute of Technology and deputy chair of the Subcommittee on Nuclear Energy explained about simulators for material flow and other aspects of the nuclear fuel cycle.

METI’s explanatory materials were a list of things that can be done with innovative reactors, but I think many of the committee members who are promoting the use of nuclear power were relatively restrained in their opinions (although there were, of course, a number of opinions strongly in favor of innovative reactors).

I spoke about (1) the social impact and the reality of social implementation, and (2) the energy security risks posed by nuclear power. There are various types of innovative reactors, and the degree of development is greatly varied. At the earliest, the first unit is expected to be in operation by the end of the 2020s, but there needs to be coolheaded discussion on whether this is really necessary or not.

27th Meeting of the Subcommittee on Nuclear Energy

The 27th meeting of the Nuclear Energy Subcommittee was held on May 30. The themes were “Current Status and Future Directions of Organizations in Industrial Circles toward Voluntary Improvement of Nuclear Safety” and “Efforts toward Steady Decommissioning Measures,” regarding which there were explanations by METI, ATENA (Nuclear Energy Association) and the Federation of Electric Power Companies.

I made three main comments. (1) Several organizations appear to be doing similar work on voluntary safety improvements. How, I asked, are you preventing problems that need to be addressed from being missed? (2) With regard to smooth decommissioning measures, I feel it is strange that the METI materials point out that securing funds is an issue. Less than two years ago, in September 2020, a contribution for facilitating decommissioning was incorporated into the consignment fee. This contribution is very odd, but even before the introduction of this system, it was changed several times in order to “secure steady funds.” How many times do we need to discuss this? Consumers are already being forced to pay part of the decommissioning costs, which should, in the first place, be borne by the operators, through the consignment fee, and I do not believe it is necessary to discuss any further measures to secure funds. (3) Regarding the review of the export system for the recycling of large equipment, the principle is that disposal of radioactive waste should take place in the country of origin, and since the review of the export system for large equipment is a major shift from that, this issue warrants very serious consideration. The necessity for the export itself should be examined, and in unavoidable cases strict assessment should be carried out, such as whether the human rights of residents, minority rights, and environmental protection in the export destination are being correctly addressed, and approval given only after the consent of the receiving location has been given.

On the other hand, several members of the committee made comments on subsidies for nuclear power. By way of response to these comments, the Director of the Nuclear Policy Division said that there had been a comment from Mr. Matsukubo (the author) on how decommissioning costs should be borne, but that this material was not prepared for that purpose. However, having heard comments from several committee members, the surprising statement was made that it was hoped that the nature of how to bear not only decommissioning costs but all kinds of costs would be considered in the light of public interest. This would appear to suggest what the real, but concealed, direction of the discussions was headed.

Separately from this committee, METI is also discussing “a method, limited to new investments that contribute to both carbon neutrality and a stable power supply, of providing long-term income predictability for the recovery of an extremely large initial investment by implementing bidding for a mix of power sources and, for successful contracts, setting the period over which capacity income can be obtained over multiple years” in the System Review Working Group of the Electricity and Gas Basic Policy Subcommittee. The type of power source has not yet been specified, but it clearly includes nuclear power plants.

I guessed that when the Subcommittee on Nuclear Energy reconvened, they would want to have this discussion. I have the impression that they did put it on the agenda at last. 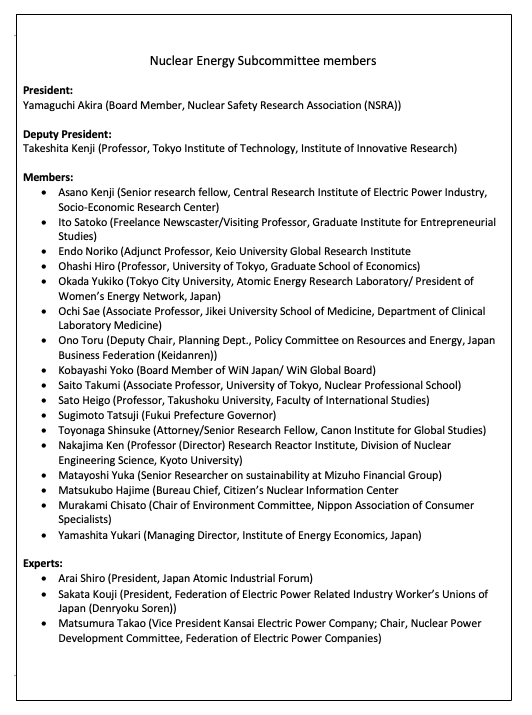