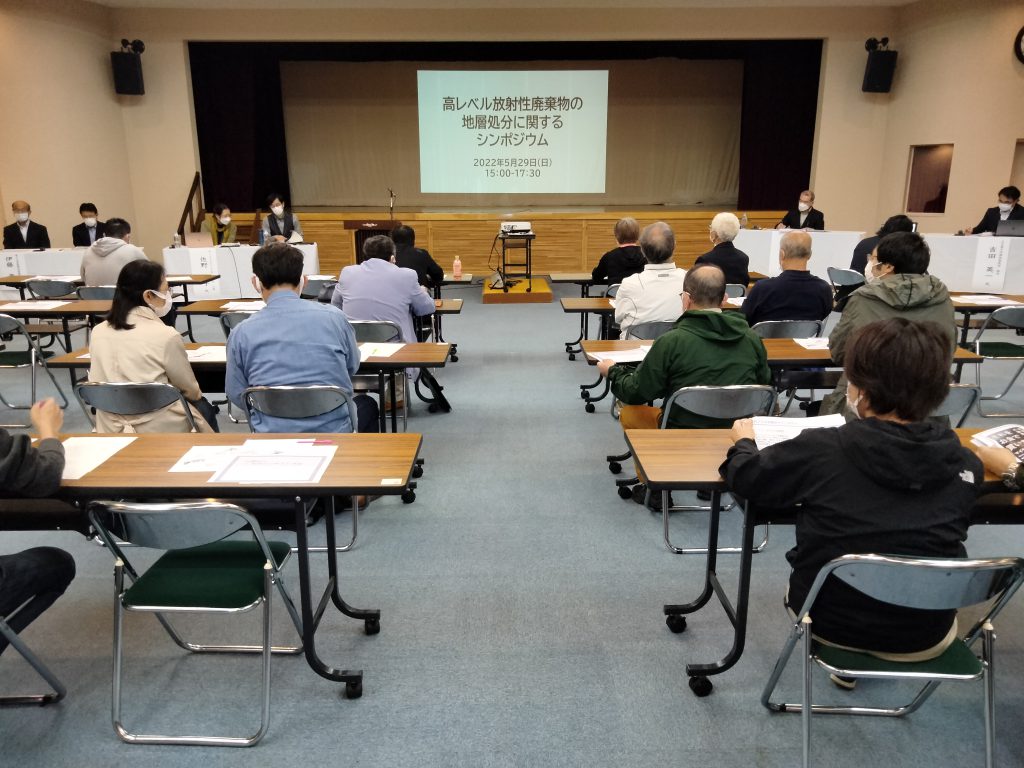 In November 2020, literature surveys were launched in Suttsu Town and Kamoenai Village, both in Hokkaido, as part of the official procedures for determining whether the two municipalities were suitable for hosting an underground storage site for high-level radioactive waste from nuclear power plants. More than 18 months has passed since that time, during which the Nuclear Waste Management Organization of Japan (NUMO), which oversees the selection of the location of the dump site, strived to promote communications with the local residents by arranging “dialogue” events. Although NUMO publicly maintained that the dialogues were not intended to create a local consensus for accepting the storage facility, the reality was that NUMO took the leadership in the move to deepen popular understanding of the geological repository. Some of the local residents and the municipalities concerned were critical of the dialogue events, claiming that such occasions were organized simply for seeking compromises and winning the support of residents for the geological disposal project. [1]

To date, dialogue events have been held eight times in Kamoenai Village. In the events, some participants, such as the members of the events’ steering committee and local villagers, expressed a wish to hear different opinions, not only those of NUMO. In response, NUMO held a symposium concerning the geological disposal of high-level nuclear waste on May 29 in the Kamoenai Village Fishing Center, by inviting experts for and against the geological disposal project. [2] Professor Yoshida Hidekazu of Nagoya University Museum was invited as the expert supporting the geological disposal project, and CNIC Co-director Ban Hideyuki, as the expert against it. This writer accompanied Mr. Ban to Kamoenai to attend the event.

The symposium was comprised of two sessions, the first concerning policy aspects, and the second technical aspects. As for policy aspects, Mr. Ban pointed out the need to obtain the consent of the prefectural governor before the prefecture’s municipalities apply for the literature survey, in order to avoid confusion and turmoil within the local communities. He also said the government’s offer of subsidies in exchange for accepting the literature survey is not appropriate, since impoverished local governments may not be able to resist the temptation of the subsidies and apply for the literature survey simply to obtain the money. Mr. Ban went on to say that the offer of massive subsidies to small municipalities may create the negative effect of depressing their local industries. In addition, he pointed out the need to determine the types and the amount of high-level radioactive nuclear waste that would be stored in the repository.

Referring to the plan to set a limit on the total amount of nuclear waste to be stored at the disposal site and the determination of the types of waste, Prof. Yoshida said it would be rather difficult to formulate such a precise plan, but added that it would be ideal if it could be done. He went on to say that accumulation of a greater amount of highly radioactive waste would endanger the safety of geological disposal. Although nuclear power generation has the advantage of not emitting CO2, it is exposed to many risks, such as tsunami tidal waves, he added. For this reason, he recommended that Japan should develop other energy resources. There was no disagreement about this point between Mr. Ban and Prof. Yoshida. On the contrary, they agreed that they would make efforts to reduce the amount of nuclear waste and to prevent the restart of nuclear power plants.

With regard to the technological aspect of geological disposal, Prof. Yoshida introduced the geological phenomenon called “concretion.” This means a hard, compact mass of matter formed by the precipitation of mineral cement within the spaces between particles, which is found in sedimentary rock or soil. He then stated, if “concretion” is applied to the construction of the repository, it may be useful for making geological disposal safer.

According to Prof. Yoshida, the geological disposal site will be constructed several hundred meters below ground because the great depth of the ground prevents weathering originating from the ground surface, and serves as a buffer against seismic motion, volcanic activity, fault movements and other types of environmental phenomena on and below the ground surface. The buffer-function level is called the ‘cocoon degree,’ and a high ‘cocoon degree’ signifies an area suitable for creating a repository of nuclear waste.

He pointed out that NUMO must find a high cocoon-degree area based on the technological data collected in the literature survey, and then determine if it is appropriate to proceed to the next stage of overview survey of the area.

Meanwhile, Mr. Ban said it is problematic that the standards by which construction of the nuclear waste repository would be deemed inappropriate are not clearly stated in the literature survey results. He went on to say that the geoscientific characteristics map gives only an extremely rough standard, and insisted that more exact and stricter standards should be formulated. For example, no volcanic eruptions are predicted on the east side of the “volcanic front” shown in the map, and for this reason he proposed that the repository site should be chosen within that area.

The comprehensive technological report contains a simulation which was conducted on the assumption that a rare frequency event had occurred. The simulation, using transuranic waste (TRU), revealed the possibility that an annual radiation exposure of 4 to 14 millisieverts per annum (mSv/y) might occur at ground level. The report said an annual exposure of less than 20 mSv/y is safe, but Mr. Ban asserted that such a high level of exposure is not safe. According to Mr. Ban, the maximum permissible level of exposure for ordinary people is 1 mSv/y and this level is set by considering the balance between the use of nuclear power and its effect on human health. The probability of the use of nuclear power by future generations is very slim, and setting the maximum permissible exposure level of 20 mSv/y for these future people is ethically impermissible, he added.

One thing that was impressive for this writer during this symposium was that when Kamoenai Village Mayor Takahashi Masayuki delivered the opening and closing speeches, nobody clapped. Generally speaking, when the head of a municipality greets the participants at the outset of a local event, they usually clap, albeit in a formal manner, but no one did so at this symposium. Mayor Takahashi has served as the mayor of the small village with a population of less than 800 people for a long time, and all the villagers know him.

I was unable to find out why the villagers did not clap, because I did not have a chance to ask them, but there is a possibility that his acceptance of the governments’ literature survey made the villagers angry and they are currently very dissatisfied with his behavior. The absence of applause made me feel that way.

As things stand now, I would like to watch the development of this literature survey issue in Kamoenai from a rather critical viewpoint from now on and try to understand the opinions and feelings of the villagers on this problem.

[1] Takano has outlined the problems with the dialogue that NUMO is conducting in a previous article at cnic.jp/english/?p=6053

[2] The symposium can be seen on YouTube at  www.youtube.com/watch?v=LUFTrLwkMKw