Notes on Participation in the Korea-Japan Nuclear Peace Pilgrimage

The 2022 Korea-Japan Nuclear Peace Pilgrimage was held for four days in South Korea on August 28-31. This yearly endeavor, beginning the year after the Fukushima nuclear accident, is hosted jointly by the Japan Catholic Council for Justice and Peace and the Korean Catholic Bishops’ Ecology and Environment Committee, who hold meetings and conduct fieldwork in Japan and South Korea aiming for the decommissioning of nuclear power plants. The participants are mostly practicing Catholics, but anyone can become involved regardless of faith, so Yoshioka Kaori and I joined in from CNIC. There were 38 participants in all, with 11 from Japan. I had been living in South Korea until last year, so I was able to give presentations and serve as an interpreter. I was excited to be reunited with my friends there and I want to report on what we accomplished. 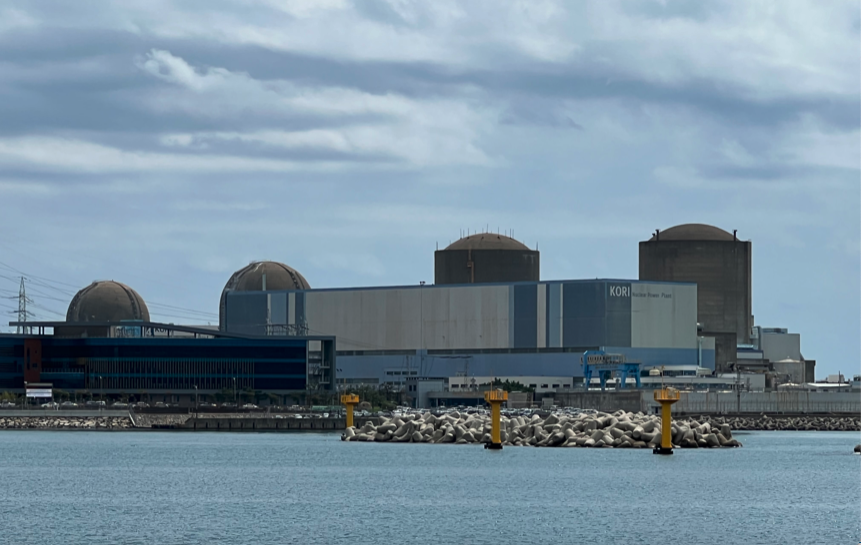 The participants gathered at Gimpo International Airport on August 28 and boarded a bus to travel to Busan. Along the way, we watched a video of a speech I had given titled “Senjika ni Okeru Genpatsu-Kaku Kanren Shisetsu no Anzensei Mondai (Safety Issues of Nuclear Power Plants and Nuclear-related Facilities in Wartime)”1) and shared our impressions of it. We could ascertain how dangerous the operation of nuclear power plants (NPPs) in Northeast Asia is, where the political situation is unstable. That evening, we arrived in the outskirts of Daegu, and at our accommodation for the night, a monastery’s facilities, we introduced ourselves to each other. The next day, we departed early to visit the Kori NPP. It is the Unit 2 reactor there that is currently the focus of attention. This reactor will reach the end of its design life in April 2023, but from the start of his term, the new President Yoon Suk-Yeol has pledged to extend NPP operation, prompting Korea Hydro & Nuclear Power Co., Ltd. (KHNP), which operates NPPs in South Korea, to immediately initiate procedures to extend their operation. Organizations opposed to nuclear power have been protesting this, and are developing an opposition movement.

The participants held a demonstration near the Kori NPP and heard Kim Hyun-Wook of Busan Energy Justice Actions, the group promoting the opposition movement locally, explain the current situation. She told us that procedures to extend Kori Unit 2’s operating life are proceeding despite violating the law. First, to extend the operating life of the NPP, what was needed was for KHNP to submit a radiation impact assessment based on an evaluation of the plant’s safety for the time period involved and opinions gathered from the residents, and this needed to be accomplished prior to two years before the end of the reactor’s design life. However, the examination of the local residents’ views has yet to be completed for the draft of the radiation impact assessment. This failure to meet the deadline is in clear contravention to the law and will incur a fine from the authorities, but not even the fine has been levied yet. In addition, it is not only procedural faults at issue; there are said to be problems with the content as well, which has insufficient countermeasures provided with respect to its assessments of aircraft impacts, acts of terrorism, earthquakes and extreme weather events due to climate change, as well as other important elements that are missing. In particular, the Kori NPP has 10 units, including Shin (New) Kori Units 5 and 6, which are under construction, and the estimations of exposures in the case of a severe accident in an area with such a high density of nuclear reactors are overly optimistic. About 3 million people live within 30 kilometers of the Kori NPP. We could all see the need for a stronger movement opposing extension of Unit 2’s operating life.

Concerns of People Living Near the Wolseong NPP, Relocation Requests 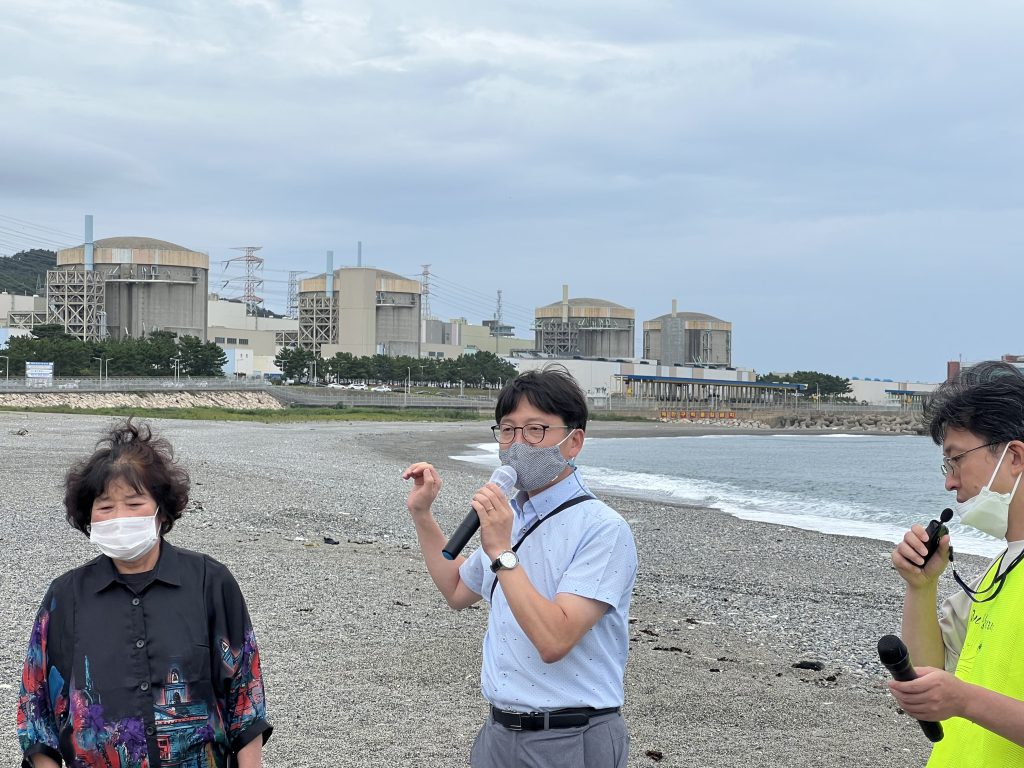 After departing the Kori NPP, we visited the Wolseong NPP in Gyeongju City. An encampment tent had been erected in front of the plant’s public relations office building by the “Committee for Relocation from the Vicinity of the Wolseong NPP” on August 25, 2014. As the name implies, there have been requests for relocation away from areas near the NPP. The committee’s vice chair, Hwang Bun-Hee explained the reason for that to us directly. She had been living 1.2 kilometers from the Wolseong NPP since 1986. At that time, only the Unit 1 reactor existed, but one after another, new reactors were added. KHNP told her that the facilities were safe and the government said that they were necessary for South Korea’s development. She knew only that NPPs were plants that produced electricity and was not particularly opposed to them. After the Fukushima nuclear accident, however, she realized they were not safe, and found out from a government-commissioned report released later that women living within 5 kilometers of the NPP, had 2.5 times the risk of developing thyroid cancer compared to those living 30 or more kilometers away. Moreover, she herself had been stricken with thyroid cancer in 2012. She wanted to move away from the plant, but the value of real estate and land prices near the NPP were so depressed that even if she sold her house and land, she would have had difficulty relocating on her own to other areas. Thus her struggle to be compensated for relocation costs began and is ongoing at present. 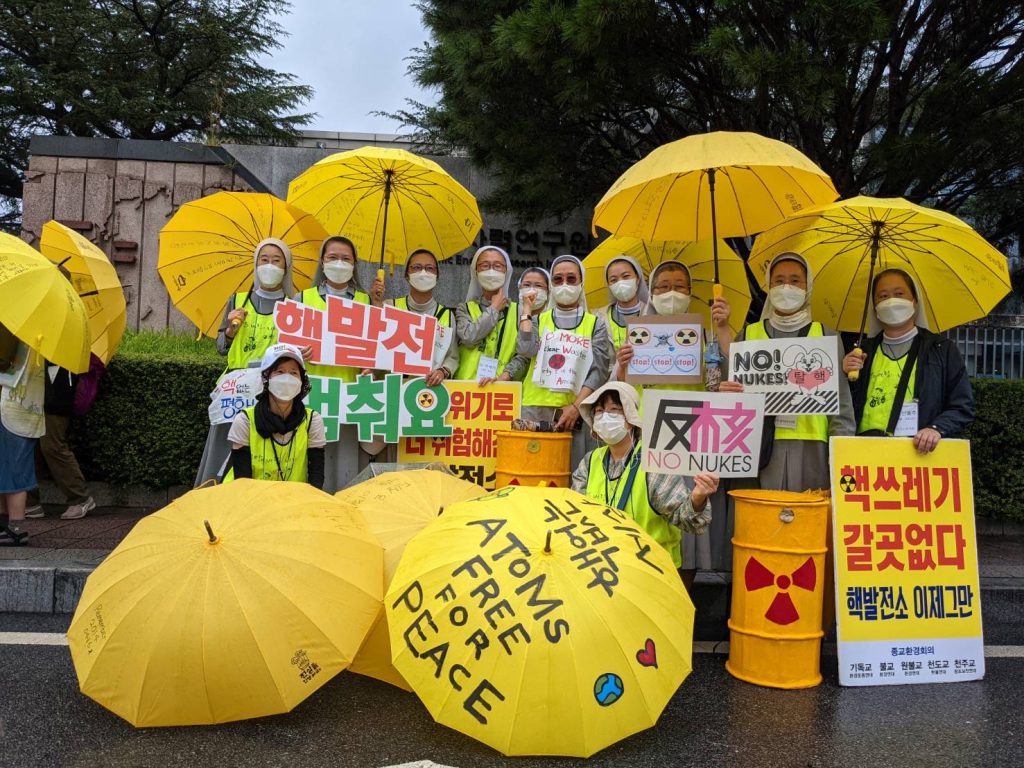 No Nukes protest at Daejeon

On August 30, we held a social gathering with local citizens in front of the Korea Atomic Energy Research Institute (KAERI) in Daejeon. In South Korea, research is proceeding on a dry reprocessing technology called “pyro-processing” and small modular reactors (SMR), with KAERI playing a central role in this research. The pilgrimage participants called for nuclear energy promotion policies to be rescinded and held a demonstration. Later, at the social gathering, Fujita Kasumi from Japan gave a talk on the current literature search being conducted by the government for materials relevant to building a high-level radioactive waste dump in Suttsu Town and Kamoenai Village in Hokkaido. Explaining that Hokkaido has an ordinance prohibiting any nuclear wastes brought in from being accepted, Ms. Fujita referred to the provision that says “Hokkaido is a region blessed with a rich, outstanding natural environment. Living a northern lifestyle under the bounty of this nature, we have nurtured a unique culture,” indicating a will to continue fighting, shielded by this ordinance the people of Hokkaido have put so much thought into.

In addition, Lee Gyeong-Ja, who belongs to an anti-nuke organization in Daejeon, answered questions about issues facing South Korea’s anti-nuke movement during the Moon Jae-In administration. She said that to achieve anti-nuke policies legally using the system many anti-nuke activists were appointed to government positions, but this caused the movement to go off track, losing the support of the people. The problem, she said, was the movement’s lack of experience. They failed to analyze the situation sufficiently, seeking quick results. She emphasized that the movement should be revitalized through solidarity with local citizens, giving it significance and profundity. 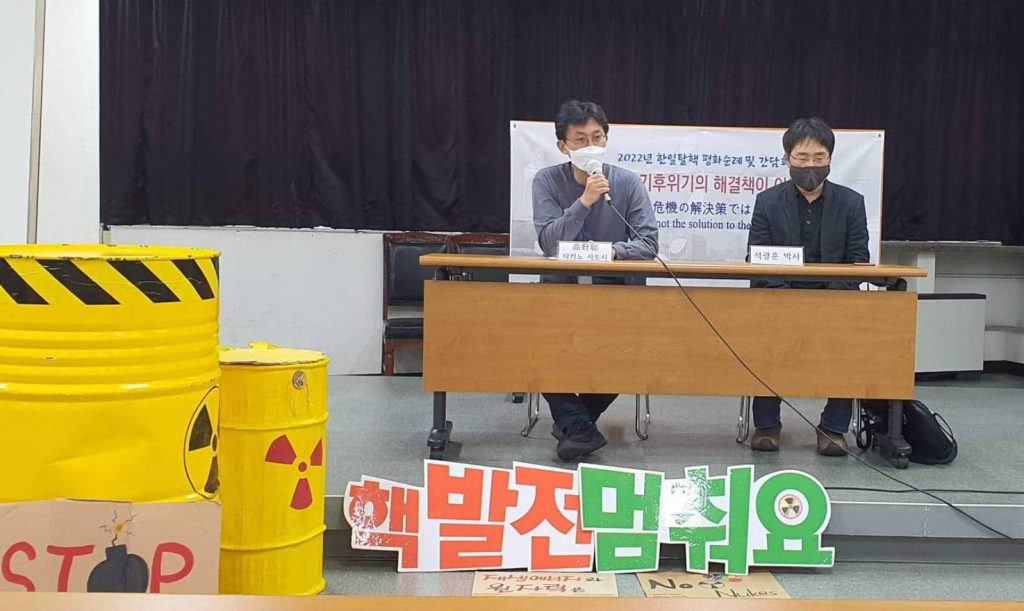 On the final day of the pilgrimage, we held a social gathering with citizens in Seoul. I gave a presentation pointing out problems with Japan’s nuclear waste policies. I also pointed out that Japanese civil society has no clear strategy. We activists write reports full of good policy proposals, hold seminars to share them, and write public comments as best we can, but can we break through to Japan’s exclusive policy-formation process and let in a little sunlight with just these efforts alone? If we do not team up with communities facing concerns and raise questions together with local movements, won’t we miss opportunities for a real public debate? A movement with even stronger ties with the citizens of Suttsu Town and Kamoenai Village will be needed more urgently in the future.

Finally, we read a joint declaration and our pilgrimage came to a close. The declaration included philosophical ideas befitting the people of faith involved, such as “Nuclear power is energy obtained by splitting atoms, and it also causes divisions among people. Moreover, the damage and pain from it are concentrated among the weak and poor,” and “While fighting against growth strategies and injustice, and never allowing the exhaustion caused by division to overcome us, we must unite our hearts and proceed forward for a peaceful world.”2) We want to continue contributing in the future to a Japanese-Korean solidarity that rejects nuclear power and aims to establish a civilization that gives precedence to life.

1) This video can be viewed (in Japanese) on the Japan Catholic Council for Justice and Peace’s YouTube channel www.youtube.com/watch?v=t7ZGE2PBQo4&t=48s

2) The complete document (in Japanese) can be found on the website of the Japan Catholic Council for Justice and Peace: www.jccjp.org/archives/2693.html