The Fukushima Daiichi Nuclear Power Station accident occurred in March 2011, resulting in the contamination of the environment and food by radioactive materials. At that time, no standard limit of radiation levels of food distributed in Japan existed, and a temporary standard was therefore set by the government. In April 2012, about one year after the accident, new standard limits were established, in which radiation exposure due to the consumption of food was limited to 1mSv per year, thus making the standard value of radioactive cesium 100Bq/kg for general food, 50Bq/kg for milk and baby/infant food and 10Bq/kg for drinking water. While this was supposed to regulate contaminated food, there were many reports of the discovery of food that was over the standard limit being distributed. In fiscal year 2020, twenty-two cases of food over the standard limit were recognized.

Due to inadequate food contamination checks and distribution management systems, some people who refused to be unnecessarily exposed to radiation decided to select food according to the area in which it was produced in order to avoid risks of radiation exposure. The Japanese government terms this action—avoiding the food produced in the affected area of the Great East Japan Earthquake—‘reputational damage,’ something which must be eliminated if reconstruction is to proceed.

Risks of radiation and risks of chemical materials

However, is making a choice of avoiding a health risk an unfair act that prevents the reconstruction of the affected areas?

The cancer risk of chemicals in tap water and other substances is regulated to a level of 1 in 100,000 per substance, which is usually the risk for a lifetime of ingestion of such substances. But those who do not want to take the risk of developing cancer from chemicals in food are able to buy organic products at some additional cost. This consumer action is not criticized by the government as ‘reputational damage.’

The standard for radiation exposure from consuming food is set at 1mSv/year. According to the ICRP (International Commission on Radiological Protection) the fatality risk is about 5% per 1Sv and ‘the standard is based on the hypothesis that the probability of radiation-induced cancer or hereditary effects increases in direct proportion to the increase in dose.’ In addition, it estimates that the fatality risk is 0.4% if a person continues to be exposed to radiation at 1 mSv per year throughout his/her lifetime.

Adding five hundred-thousandths per year (0.005% for 1mSv/year) means that if we take 80 years as the average lifetime, four hundred people’s deaths are added per hundred thousand people, a risk that is two digits higher than that for chemical materials.

It is sometimes claimed that as the risk of radiation exposure is the total of the risks of various radionuclides, comparing the regulation for one chemical material to the regulation for radiation exposure is improper, since there are thousands of chemical materials that we may come into contact with in daily life. However, the radiation exposure standard of 1mSv per year is not the ‘total’ amount of exposure but an ‘additional’ exposure. The following are all conveniently used to explain that exposure of 1 mSv or less is safe: a) the radiation dose limit for the public from nuclear facilities under pre-accident conditions, b) the new standard for radioactive cesium in food, c) the standard of 8,000 Bq/kg for “designated waste” introduced to handle the large amount of radioactive waste generated by the Fukushima nuclear accident (exposure of workers disposing of the waste), and d) the standard for the disposal of radioactively contaminated water, which has been the focus of attention at the Fukushima nuclear power plant, now undergoing decommissioning. The fact that these exposure risks add up, as well as the effects of this addition, have not been explained to civil society by the regulators, and of course have not been discussed.

Further, it is the user who decides whether or not to use chemical materials, weighing the advantages and disadvantages of use, but in the case of exposure due to nuclear power plant accidents, there are no direct advantages to anyone.

We would like to support people’s right of choice to avoid the risk of radiation exposure by measuring even low levels of radioactive cesium contained in milk and disclosing the areas of production and levels of contamination. 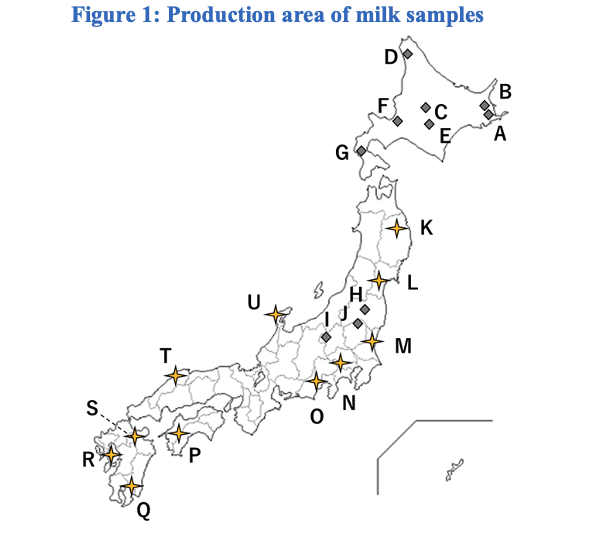 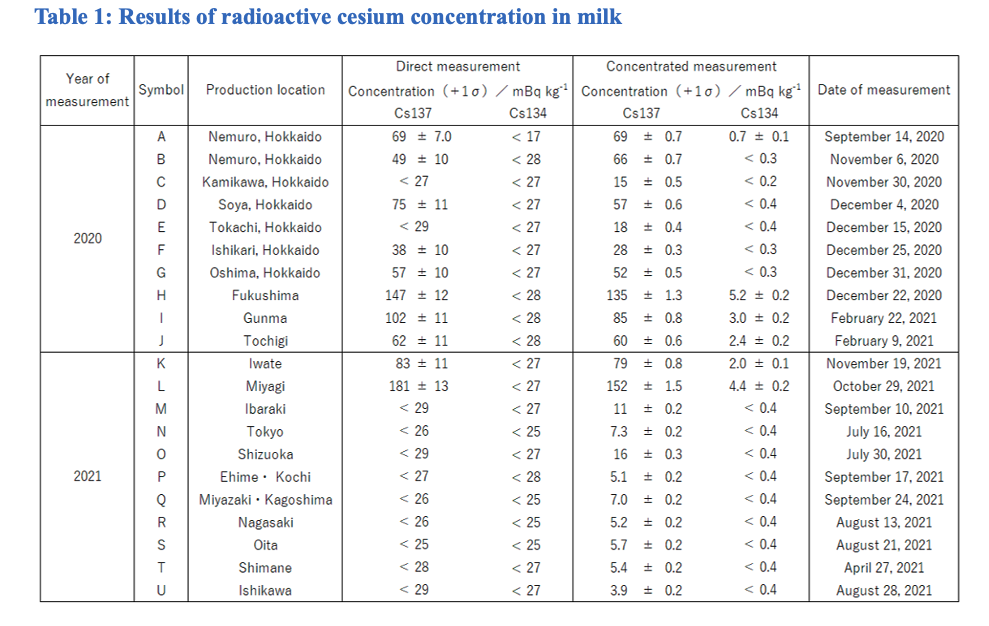 Please note that about 90% of cesium in milk exists in the whey, and therefore adopting this cesium concentration method indicates figures that are 10% lower in the concentrated measurement than in the direct measurement.

At the time the Fukushima Daiichi Nuclear Power Station accident occurred, cesium 134 and cesium 137 were emitted into the environment at the ratio of about 1:1. The half-life of cesium 137 is about 30 years, and that of cesium 134 is about 2.1 years. By taking into account the half-life of cesium 134 and 137, and the length of time from the disaster to the measurement, it is possible to calculate a cesium ratio (cesium 134/cesium 137) of cesium that was emitted as a result of the accident at the time of the measurement. Five years after the accident (March 2016), the cesium ratio had fallen to 0.21, Ten years after (March 2021), it had decreased to 0.046.

The cesium ratio differs slightly according to each reactor. Thus the cesium ratios due to the accident in the fallout in each location are different. The initial cesium ratios in the atmospheric fallouts in each area from March to May in 2011 were calculated using data from the environmental radiation database.

The proportions of cesium-137 (derived from the Fukushima nuclear reactor / total in the milk sample) were derived by calculating the measured value of cesium 134 concentration and calculated cesium 134/137 ratio at the time of measurement.

The following is one calculation example for Iwate. The cesium 134/137 ratio measured on November 19 in 2021 which was derived from the Fukushima nuclear disaster was calculated as 0.035 in Iwate. As the result of the measurement, 2.0±0.1mBq/kg of cesium 134 was detected and therefore cesium 137 derived from Fukushima reactor should be 56±3.9mBq/kg on the basis of the cesium 134/137 ratio. However, the measurement result of the concentration of cesium 137 in the sample was 79±0.8mBq/kg. The reason why it was higher than expected is because it contained cesium 137 that traces back to nuclear weapon tests and other sources. Thus, out of the total cesium 137 contained in the milk produced in Iwate, it was concluded that the ratio of 0.71±0.05 was derived from the Fukushima nuclear accident. 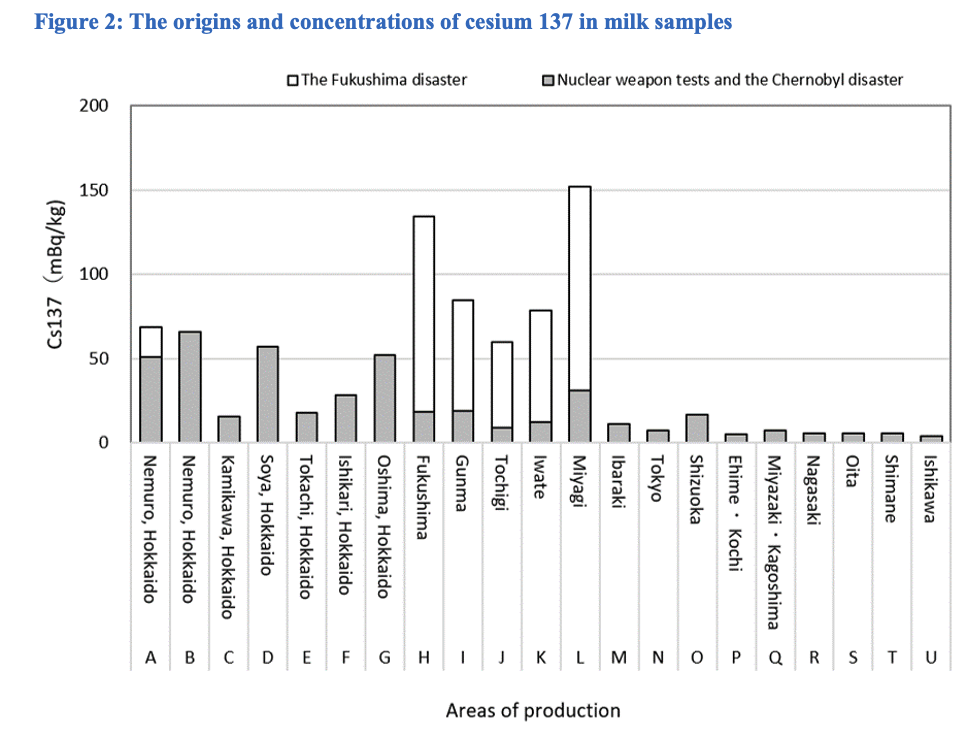 Assuming that the radioactive contamination level of milk is 50Bq/kg of and also assuming that radiation exposure from all food is up to 1mSv per year, what is the additional risk of cancer death caused by radiation exposure through food based on the concentration of Cs137 in the milk measured in this study?

The concentration of cesium in milk in this survey was found to be 4-150mBq/kg, and when milk is at the contamination level of 150mBq/kg, this is equivalent to 0.003mSv per year. Under these conditions the lifetime risk of dying from cancer increases by 1.2 people per 100,000.

As noted at the beginning of the article, in general, carcinogenic chemical materials are regulated so that their concentration causes one person per 100,000 to develop cancer in his/her lifetime. If people are to face an equivalent risk of cancer death from consuming radioactively contaminated food, the detection limit should be lowered to 0.1Bq/kg (100mBq/kg), and this information should be published to allow citizens who wish to avoid exposure to make choices on what products to buy. A sufficient number of detections are also required to support this choice of citizens to avoid exposure.

The Fukushima Daiichi nuclear accident has caused serious environmental radiation contamination to Fukushima and surrounding areas. Since then, some people have selected and purchased food that is produced in western Japan and Hokkaido in preference to food produced in the affected area in order to avoid radiation exposure through food.

The concentrations of radioactive cesium in milk produced in specific areas across Japan were measured using the AMP method and the germanium semiconductor detector. This procedure made it possible to compare contamination in each area.

Western Japan, which was not so much affected by the Fukushima nuclear disaster, has also been contaminated by radiation from a historical angle; the harsh fact is that the past contamination caused by atmospheric nuclear weapons tests is still contained in food. We must become more aware that the mistake which the current generation has made by causing serious environmental radiation contamination from the Fukushima Daiichi nuclear accident will continue to affect generations in the future.