On August 24, 2022, Japanese Prime Minister Kishida Fumio held the second meeting of the GX (Green Transformation) Implementation Council, which was set up under his strong initiative. At the meeting, he instructed the Ministry of Economy, Trade and Industry (METI) to request that experts review,  and that the ruling alliance of the Liberal Democratic Party and New Komeito Party consider, Japan’s nuclear policy from four viewpoints: the development and construction of next-generation advanced reactors; the restart of existing reactors; the extension of the operating lifetime of existing reactors; and acceleration of the process of spent-fuel reprocessing, reactor decommissioning, and final disposal of radioactive wastes. The PM’s instructions regarding developing and constructing next-generation advanced reactors and extending the operating lifetime of existing reactors mark a major shift from Japan’s nuclear power policy following the Fukushima Daiichi Nuclear Power Station disaster, which was geared to less dependence on nuclear power plants and safety-first operation of plants.

METI has tossed these instructions to the Nuclear Power Subcommittee, a consultative body of the ministry, and to the Innovative Reactor Working Group (Innovative Reactor WG), which is under the subcommittee. The author is a member of both the subcommittee and WG, and presents opinions from the standpoint of phasing out nuclear power generation. The author became a member of the two bodies this year, participating in nine Nuclear Power Subcommittee meetings, the 24th to 32nd, and four Innovative Reactor WG meetings. The secretariat for the two bodies is the Nuclear Energy Policy Planning Division, Agency for Natural Resources and Energy, METI. Like many bodies that report to the government, the secretariat determines who chairs the body, whom it consists of, and what to discuss, and also prepares most of the handouts and data for meetings. As a result, only two members who speak from the anti-nuclear position are in the Nuclear Power Subcommittee, which includes 18 members and three expert members. Of the Innovative Reactor WG members, which include ten members and three expert members, the author is the only anti-nuclear member. While Japan’s public opinion on nuclear energy predominantly favors a future nuclear phaseout, the members of these governmental bodies are overwhelmingly pro-nuclear. I participate in them with a great deal of discomfort.

This document introduced the trends seen from the results of the annual poll conducted by the Japan Nuclear Culture Foundation. The summary of the results said: “Recently, those who favor ‘immediate abolition of nuclear power generation’ is shrinking, while the ratios of those who support ‘increase’ or ‘maintaining the status quo’ did not change.” “The younger generation prefers ‘increase’ or ‘keeping the status quo,’ while the senior generation tends to support a ‘gradual fadeout’ and ‘immediate abolition.’” This summary apparently ignores a major finding from the polls: The most favored answer of all generations in all past polls has been “gradual fadeout.” This oversight exposes the attitude of METI, which sees only what it desires to see and does not see what it does not desire.

On July 29, 2022, the fourth meeting of the Innovative Reactor WG was held, to which the METI presented an interim report of the discussion at the WG. The report was then presented to the 30th meeting of the Nuclear Power Subcommittee on August 25. Many of the subcommittee or WG members expressed approval of the report. What I would like the readership to pay attention to are the July 29 interim report of the Innovative Reactor WG, entitled “Technical roadmap for advanced reactor development for the achievement of carbon neutrality and energy security (abridged draft),” and its attachment, “Technical roadmap for the introduction of advanced reactors,” in which development and construction schedules for advanced reactors are shown.

The Innovative Reactor WG met four times, but the idea that the next-generation advanced reactors would be these five reactor systems was not discussed at any of the meetings. The schedules shown in the attachment were never specifically discussed either. METI, the secretariat, disclosed these schedules without any prior notice.

To my inquiry about the significance of this document, the secretariat responded: “It is not meant to determine the policy of the government, nor to wrap up the discussion to move on to the public comment stage.” “Because the entire agenda prepared for the Working Group was completed, we prepared an interim report of the opinions presented so far, and that is all.” The author submitted a statement about this interim report at the fourth Innovative Reactor WG meeting. However, the interim report was submitted to the Nuclear Power Subcommittee without any change after being discussed at only a single meeting. The interim report was the first document that marked the change in the government’s nuclear policy, which promotes the construction of new nuclear power plants. This important document was simply forced through the WG.

In his instructions at the GX meeting, the PM used the expression innovative reactors, a term which has hardly been heard of before. The abrupt instructions by the PM must have been based on the interim report from the Innovative Advanced Reactor WG.

As is apparent from the reactor schedules in the attachment to the interim report, the advanced light-water reactor is making outstanding progress among the next-generation advanced reactors. Its construction is planned in the first half of the 2030s and it is scheduled to start operation around the mid-2030s. Nevertheless, what is this “advanced light-water reactor”? According to the interim report, it newly features enhanced measures against external hazards such as natural disasters and aircraft collisions as well as a passive safety reactor that applies natural principles to safety functions. The report also states that, in case of a severe accident, such measures as a core catcher as well as radioactive noble gas separation and storage equipment can be installed in the reactor, thus preventing environmental impacts and avoiding emergency evacuations or soil contamination. However, most of these features are already in use in the European pressure reactor (EPR) system and AP1000 reactor system, which are in operation in China and under construction in Europe and the U.S.

Nuclear power reactors are often classified by the generation. According to the classification by the Generation IV International Forum (GIF), established under the initiative of the U.S. and in which Japan currently participates, the light-water reactor having the features mentioned in the interim report corresponds to Generation III or Generation III+. The author asked METI about how advanced the light-water reactor might be, and received following answer:

Concerning the small light-water reactor, another example of the next-generation reactors mentioned in the interim report, the Long-term Nuclear Power Plan revised in 1982 by the Atomic Energy Commission stated: “The operation of middle or small light-water reactors can be realized in the relatively near future depending on the conditions. These reactors should be promoted through the initiative of the private sector after preparations such as preliminary research are completed.” Forty years has passed since then, but small light-water reactors have never been built. This is not surprising. Determining the siting of a nuclear plant takes an exceptionally long time; therefore, for operators there is no advantage to be gained by building a small light-water reactor unless the reactor could be built extremely inexpensively.

Is there any demand for this type of reactor in other countries? A sometimes-heard plan is to build one in a developing country where there are no transmission lines, or to build one as a replacement for a thermal power plant that is expected to be closed down. However, a nuclear power plant is a 100-year project, including decommissioning. Is it possible, especially in developing countries, to maintain nuclear power safely? This should be carefully evaluated. When a small reactor is used to replace a thermal plant, cost-effectiveness is questionable. As an example, the power generation cost of a small light-water reactor is estimated to be 60 U.S. dollars per megawatt-hour (MWh) (or 8.7 yen per kilowatt-hour at an exchange rate of 145 yen per dollar). On the other hand, a mega solar power station with battery storage generates power at 45 US dollars per MWh, and wind power, 30 U.S. dollars per MWh. As can be seen from these figures, there is no market for small light-water reactors in any country.

According to the handout submitted at the first Innovative Reactor WG meeting (April 20, 2022), one high-temperature gas reactor produces 700 to 900 million normal cubic meters (Nm3) of hydrogen per year when used in a cogeneration system (which generates power while producing hydrogen). If used in a hydrogen generation plant, a high-temperature gas reactor produces a maximum of 280 thousand Nm3 per hour (which corresponds to 2.45 billion Nm3 per year). Meanwhile, the hydrogen demand for 2050 is expected to be 200 billion Nm3 per year, and the amount of hydrogen required for hydrogen steelmaking is 2.72 billion Nm3 per year for one blast furnace.

The Innovative Reactor WG interim report mentions the fast reactor system in the section entitled “Efforts for realizing circulatory energy.” It states: “In the fast-reactor cycle, which will further improve the effect of the nuclear fuel cycle, high hazard-potential plutonium and minor actinides, will be extracted from the high-level radioactive wastes to be reused as fuel, such that the period required to reduce the potential hazard to the level of the natural environment can be reduced from 100,000 years to 300 years. The volume of nuclear wastes can be reduced to one-seventh, and the area required for nuclear-waste disposal facility can be reduced to one-tenth.” However, to realize this fuel cycle, fast reactor spent fuel reprocessing is required as a precondition. Unfortunately, the national policy of developing the fast reactor reprocessing cycle disappeared when the nation gave up developing the fast breeder–reactor Monju. The construction of the light-water reactor fuel reprocessing plant in Rokkasho Village, Aomori Prefecture, is experiencing incredible delays. A completely new reprocessing plant for fast-reactor fuel would need to be built. It will be necessary to develop technology for the fast-reactor fuel, and building a new reprocessing plant would require huge expense. In other words, while it may be theoretically possible to reduce the hazard level and waste volumes, spent-fuel separation and fuel manufacturing have not yet been realized. 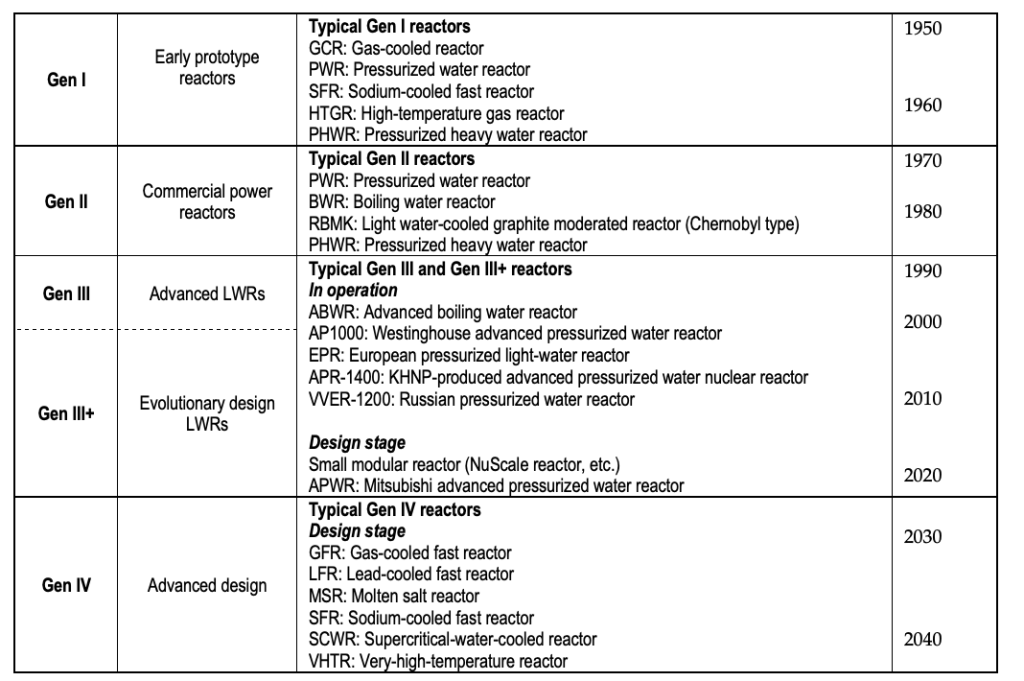 Preparation of the “control tower” function and business environment

The Innovative Reactor WG interim report states: “To strengthen the management of this research and development project, a ‘control tower’ function will be created, which will, as the core of the project, control the entire system consistently while proactively coordinating with stakeholders.” The development of advanced reactors has thus far been unsuccessful, but is it the lack of such a function that has resulted in the failure? Isn’t it rather because of the lack of end users that seriously need these reactors? In this respect, there is no demand for other reactors than large light-water reactors.

A problem in the nuclear industry is that it is looking less and less like a promising business prospect. The Innovative Reactor WG interim report states that it is necessary to prepare a business environment where operators can invest in nuclear power. In other words, the report says that, for the operators to invest in nuclear power, a framework should be built where the government or consumers would shoulder the cost burden.

If nuclear power is cheap, operators should/would duly bear the costs. If there are risks that are too great to bear, they have little option but to give up. This is normal business practice. However, what we have here is the government joining hands with the operators to introduce a costly power supply that will increase the burden on the population.

The Innovative Reactor WG and Nuclear Power Subcommittee, as well as the GX Implementation Council, proceed with discussions without the participation of the nation’s population. This is a serious problem that requires immediate correction.