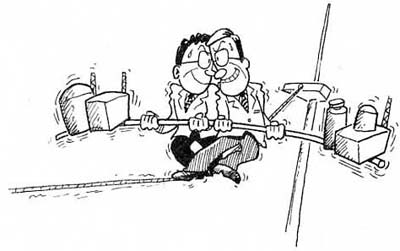 On October 1st, a new research and development agency, Japan Atomic Energy Agency (JAEA), was established. It was established in the name of administrative reform, which aims to promote rationalization and cost reduction of government agencies through integration. So although it is a ‘new’ agency, in fact it was created by merging two existing agencies, namely Japan Atomic Energy Research Institute (JAERI) and Japan Nuclear Cycle Development Institute (JNC).

JAERI was established in 1956. It was an R&D agency and, as the name suggests, it focused on research. JNC, on the other hand, focused on development. It was established in 1956, the same year that JAERI was established, under the name of Atomic Fuel Corporation (AFC). AFC was reorganized and re-established as Power Reactor and Nuclear Fuel Development Corporation (PNC) in 1967, then later was renamed as JNC in 1998. It was renamed in response to public criticism of the accidents and cover-ups at the Monju Prototype Fast Breeder Reactor in 1995 and the Asphalt Bituminization Treatment Facility at Tokai Reprocessing Plant in 1998. While PNC was assigned the additional role of developing new models of reactors (FBR and ATR), the establishment of JNC was literally a name change.

Originally, PNC was established because the ruling Liberal Democratic Party disliked the persistent conflict between the board of directors and the union of JAERI. It therefore decided to transfer the development of new-type reactors to another agency and ever since it has been said that the ‘research-oriented JAERI’ and ‘business-oriented PNC’ are like oil and water. JAEA is an attempt to mix oil and water, so one can foresee many troubles ahead.

Nevertheless, with the launching of JAEA, a giant nuclear R&D agency came into being. Progressive cost reduction is expected, but at the time of establishment, it had a staff of around 4,400 and an annual budget of 200 billion yen. Furthermore, it had an accumulated deficit of approximately 4,400 billion yen. JAEA’s founding chairman, Yuichi Tonozuka, (formerly chairman of JNC) declared a goal of becoming “the world’s best R&D agency”.

According to comments that Mr. Tonozuka made during interviews, JAEA will focus on four areas: FBR, disposal of high-level radioactive waste, J-PARC (Japan Proton Accelerator Research Complex – a joint research project with High Energy Accelerator Research Organization), and nuclear fusion. The first two were inherited from JNC and the latter two from JAERI. Activities in these areas center on the construction of large-scale facilities. No reference is made to research on nuclear safety, which was the responsibility of JAERI. As for the naming of JAEA, it is the first time that the term ‘Agency’, usually used for administrative organizations, has been used for an R&D organization.

With the establishment of JAEA, it is feared that research on nuclear safety will be more neglected than ever. There is also the issue of safety review. Up to now a substantial number of JNC and JAERI staff members were involved in safety review of nuclear facilities. JNC facilities were reviewed by JAERI staff, while JAERI facilities were reviewed by JNC staff. Although there were some criticisms, this cross-reviewing ensured a certain degree of neutrality. There is a great sense of uncertainty as to how JAEA will develop a framework to ensure neutrality in future.