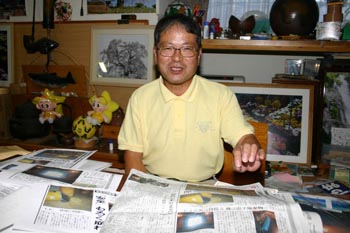 In 1955 the Ningyo Toge uranium deposit was discovered in Kagamino, Okayama Prefecture where Teisuke Ishio lives. Ever since then, the local office of the Japan Atomic Energy Agency (JAEA) has been a base for Japan’s nuclear energy development, engaging in research and development into mining, refining, enrichment, and so on.In order to take on the environmental pollution from the uranium operations at Ningyo Toge, in December 1980, along with colleagues in the anti-nuclear movement, Teisuke established the Committee to Consider Uranium Pollution. In July 1981 the group was reorganized and changed its name to the Anti-Nuclear Citizens of Tsuyama City. As Director of the group, Teisuke has continued his activist work in the north of Okayama Prefecture (Mimasaka District) for 28 years since then. He has been involved in campaigns including monitoring fuel shipments to Ningyo Toge and nuclear power plants and monitoring pollution, in particular uranium contaminated soil, at JAEA’s Ningyo Toge facility. Through these local campaigns, he has carried on the fight against the government’s nuclear development policy.

He has tackled these issues through a tenacious freedom of information (FoI) campaign, forcing the government and its agencies to release documents that they had concealed and tracking down the inconsistencies in them. Through painstaking reading and analysis of the huge quantities of documents thus obtained, the objectives and actions of the proponents of nuclear energy became clear.

Japan’s FoI system was only introduced a few years ago and it is inadequate in comparison with Europe and the US. Teisuke was putting a huge effort into this campaign even before the FoI system was in place. The former Power Reactor and Nuclear Fuel Development Corporation (PNC – now JAEA) even went so far as to send him a bill for 690,000 yen for releasing documents. This incident occurred just before the FoI law was established. It was raised in the Diet and made an important contribution to the improvement of the FOI system.

His sustained and persistent FoI campaign brought to light some important issues. One of these was a secret report by PNC on selection of a site for a final repository for high level radioactive waste (HLW). This has been used by citizens’ movements opposed to siting of a HLW dump, for example in the Ningyo Toge region, in western Kochi Prefecture and in Tsushima City (Nagasaki Prefecture). Attempts to find a HLW dump site have been thwarted as a result.

A recent success in his FoI campaign was obtaining the release of 1,300 photos taken after the July 2007 Chuetsu-oki Earthquake by the Nuclear and Industrial Safety Agency of the damage to the Kashiwazaki-Kariwa Nuclear Power Plant. The damage to the plant immediately after the earthquake was exposed for all to see when these photos were uploaded onto the web site of a local anti-nuclear group. No matter how much the government and other proponents of nuclear power try to gloss over the problems, it is clear that there is no choice but to close down the plant.

As an anti-nuclear activist, he spends his time fighting the establishment, but there is also another side to his life. He delights the neighbourhood each year when the several hundred chrysanthemums which he grows are in flower. It seems that his activism stems from his love of both nature and people.

* Hiroshi Nakashima is a member of Tsuyama Anti-Nuclear Citizens’ Group.