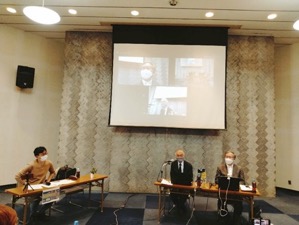 The author (on left) moderating an event held by NPA

In addition to working at the Citizens’ Nuclear Information Center, I am also serving as a coordinator for the New Era Asia Peace Academy (abbreviated as NPA). Since June 2020, NPA has regularly planned and held public lectures in hybrid form, combining on-line (Web-type) and off-line (face-to-face type) formats. Since the start of the COVID-19 pandemic, online courses have been held, mostly on Zoom. The courses are organized into six sessions per term, which are held every other week continuously for about three months. Thus far, six terms of courses have been held. The themes of these courses are diverse, covering topics such as the Constitution, gender issues, Okinawa, environmental concerns, Japan’s post-war compensation, modern Korean history, indigenous peoples, the history of social movements in Japan, and other topics. I started coordinating courses on nuclear issues, such as the Fukushima nuclear accident, in the sixth term. The main roles of the coordinators are to select course themes and suitable instructors, and to moderate the courses. The seventh term of NPA courses has started from July this year.

Let me introduce the contents of the course I am in charge of. The title is “Course on Denuclearization and Climate Justice for Changing the System: Seeking Democracy and an Image of Society for Radical System Transformation.” The core theme of this course is that we should proceed with denuclearization and overcoming the climate crisis in tandem. The reason for this is that these two challenges not only deal with energy issues, but constitute a battle for reforming the system overall, with its values and the dominance relationships of the powers that be. I think this is the reason there is a call for “system transformation” worldwide. My aim, however, is not only to increase participants’ knowledge, but to expand their imaginative power for resistance so they can implement it as a social movement and radically transform the system. As I have experience of living in South Korea for 11 years from 2010, I will also conduct a session with Korean social activists invited to promote solidarity between Japan and South Korea in denuclearization and climate justice.

Specific course content is as follows. The first session has already been held, but I invited a person who had evacuated from an area outside the official evacuation zones, who talked to us about the right to evacuate. The second session will address the issue of nuclear power and war, as has been highlighted in the Ukrainian crisis. I am inviting a specialist who has run simulations on how much damage would occur if Japan’s nuclear power plants were attacked and the radioactive contents scattered.

The third session will be a course on the literature surveys currently underway for Suttsu Town and Kamoenai Village in Hokkaido as candidate sites for final disposal of nuclear waste. I am inviting a Suttsu Town resident who has organized an opposition movement and can explain issues of the current literature survey. The fourth session will cover Japan’s climate justice movement. As a specific example of this, we will hear a climate justice activist tell us about the opposition movement she is involved in to address issues with a new coal-burning power plant being built in Yokosuka City, Kanagawa Prefecture, about 60 kilometers south of Tokyo.

In the fifth session, we will learn about nuclear power issues in South Korea. We will conduct a critical analysis of the Moon Jae-in administration’s denuclearization policies, drawing lessons for Japan’s denuclearization movement. The sixth session will cover South Korea’s climate justice movement, which has become more active recently. I am inviting a climate justice activist who has led intense demonstrations on the streets there, who will share with us the movement’s policies and tactics. The course is planned for more than 20 participants. Through lively discussions, we anticipate new ideas coming forward for more radical social movements.