The thirteenth No Nukes Asia Forum (NNAF) was held from September 18 through 21 in Taipei. Fifteen people attended from Japan, India, Indonesia, Korea, Philippines and Thailand, in addition to the participants from Taiwan. 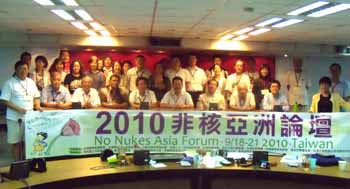 Taiwan was chosen as the venue because of the imminent startup of the No. 4 Nuclear Power Plant. The date was chosen to coincide with the anniversary of a massive M7.6 earthquake that hit Taiwan on September 21, 1999.

NNAF 2010 included country reports and discussion of issues such as earthquake-induced nuclear disasters, global warming and renewable energy. Japanese participants, who have lots of experience dealing with the problems caused by mixing earthquakes and nuclear power, reported on the situation of the Kashiwazaki-Kariwa Nuclear Power Plant, while Japanese and Korean participants confirmed the need to work with activists in other Asian countries to prevent Japan and Korea exporting nuclear power plants.

Despite the fact that Indonesia is subject to the full spectrum of natural disasters, from earthquakes to volcanoes and tsunami, the government still has not given up hope of constructing a nuclear power plant on the Muria Peninsula in Central Java. In the Philippines there is talk of reviving the Bataan Nuclear Power Plant, which, despite being completed 25 years ago, has never operated, but the Philippine participants inspired us all by reporting that the opposition movement is as vibrant as ever.

Participants from Thailand informed us that the Thai government plans to shortlist three sites for the country’s first nuclear power plant from the current list of 17 sites in the first half of 2011. We therefore decided to hold NNAF 2011 in Thailand.

After the international meetings participants toured Taiwan’s nuclear power plant sites. In addition to exchanging experiences with local activists, we were able to deliver a message to Taipower and Taiwan’s Atomic Energy Council at a hearing called by a member of parliament.