A symposium on “The current situation of exposed nuclear plant workers in France, Ukraine, South Korea and Japan” was held on March 27, followed by an “International solidarity symposium for seeking the rights of exposed workers” on March 28. These events were organized as a working session and related symposium of the World Social Forum on Nuclear Energy, held at the YMCA, Tokyo, from March 23 to 28, 2016. A total of around 300 people took part in the symposiums and heard reports from foreign nuclear workers.
The problems radiation-exposed workers face are shrouded in darkness in many countries and are not clearly recognized as one of the problems involving nuclear power plants. In the working session on March 27, the speakers reported on the current situation of such workers in their own countries and the participants identified common problems from those reports.
The first speaker was Dr. Annie Thebaud-Mony, a French sociologist specializing in work safety and workers’ health problems. She began her report by showing a video titled “Nuclear-related work today.” Thebaud-Mony pointed out that the risk of death from cancer amongst the workers participating in the Manhattan Project, the U.S. research and development project that produced the first nuclear weapons during World War II, had been ten times higher than that of ordinary workers. She also maintained that current health examinations for nuclear plant subcontracted workers and uranium miners are insufficient in many countries, as are the health examinations for liquidators, or clean-up workers of the 1986 nuclear accident at the Chernobyl Nuclear Power Plant (NPP) in Ukraine.
The next speaker was Philippe Billard from France, who is a nuclear plant subcontracted worker himself and has waged many legal battles for such workers by setting up a supporting organization. He reported that the subcontracted workers at French nuclear plants are being forced to perform hard work in severe conditions under the multiple-layer sub-contracting system, just like their counterparts in Japan. He insists that a great number of nuclear workers are suffering from illnesses or general poor health but that the French authorities claim that their health problems have not been caused by their exposure to radiation. This issue therefore, is little known among the French public, he added.
Next, two people from Ukraine spoke about their situation. One of them was Valentyn Germanchuk, a liquidator who was 36 years old when the Chernobyl accident occurred. At that time he operated the decontamination equipment for Units 3 and 4 turbine steam. The other was Mykola Voznyuk, who was a 27 year old military security officer, charged with management of the workers and procurement of emergency goods. They claimed that they had been healthy before they began participating in the clean-up operation but immediately afterwards, they began to experience deteriorating health including heart conditions and problems with other body systems.
They suffered from various illnesses, such as hypertrophic heart, strong chest pains, high blood pressure, erratic pulse and disorders of the thyroid, duodenum and kidneys. They also experienced deformation of their knee joints. They said they had obtained official disability certificates. Nevertheless they had received hardly any of the compensation stipulated under the Chernobyl-related law, and were living in poverty while continuing to struggle with health problems. The two speakers called for  nuclear power generation to be abandoned because of its extremely serious impacts on the general public. They stressed that any amount of compensation would be insufficient for such damage. 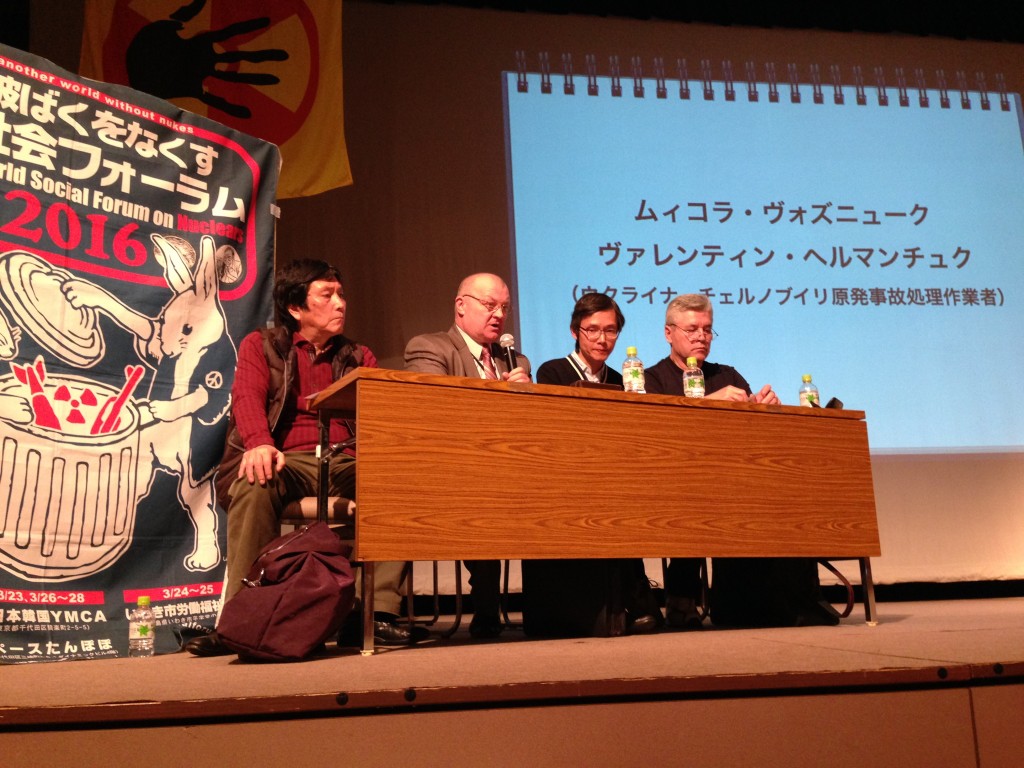 The speaker from South Korea was Kim Jichong, who was engaged in water treatment work at the Hanul NPP in the Gyeongsangbuk-do Province of South Korea and is currently the head of the Nuclear Plant Waste Water Business Association. He reported on the employment situation of nuclear plant workers in his country, commenting that among the OECD countries, South Korea had the highest percentage of temporary workers in nuclear plants, and that their average wage was merely 47.9% of  regular worker’s wages. In protest against this gap, the workers’ union, which organizes 80% of South Korea’s nuclear plant workers, is demanding that the government rectify this unfair situation.
The last speaker was Minoru Ikeda from Japan. He was previously engaged in decontamination work in Namie Town, Fukushima prefecture, and later, the accident clean-up operation and decommissioning work at Tokyo Electric Power Co. (TEPCO)’s Fukushima Dai-ichi NPP. He reported that the wages and accommodation for decontamination workers were better than those for nuclear plant workers because the decontamination job was offered by the state. However, for the clean-up operations organized by TEPCO, a private company, the wage calculation method was unclear, and he received only 4,000 yen of the 20,000 yen additional wages paid to subcontractors by TEPCO as danger pay. On the other hand, he said, safety exposure-dose management for the clean-up workers was stricter, while safety measures for decontamination workers were inadequate. He claimed that the limited safety measures taken by the state for decontamination workers included little beyond supplying radiation protection masks. He said the workers had to procure work outfits and shoes on their own. He noted that decontamination workers went home wearing their dirty, contaminated outfits after work.
The next day, March 28, the panelists from the previous day’s session and forum participants discussed what direction activists’ efforts should take to support nuclear workers and whether international solidarity could be achieved among supporting organizations and groups.
The Ukrainian clean-up operation workers, Germanchuk and Voznyuk, recalled the Chernobyl accident while showing photos of the nuclear disaster. They pointed out that the nuclear  plant had structural problems. The accident occurred, despite the experiment being conducted as scheduled, they said. They condemned the former Soviet Union officials who asserted that the accident had been caused by human error and that the plant workers were responsible for it. The two workers expressed anger at the officials’ attitude of pinning all the blame for the accident on the plant’s workers. They also claimed that they and many other workers had been forced to perform the clean-up work without protective gear and gas masks in an extremely radioactive environment where levels had occasionally exceeded the dosimeter’s scale. They went on to say that these government officials had entered dosages much lower than the actual levels, in the workers’ radiation dose management notebooks, and that this happened in front of their very eyes. Such a scenario could well be the future of nuclear plant workers across the world, perhaps indicating that the Chernobyl accident and its clean-up operation should continue to be closely monitored.
Billard from France proposed some demands that should be presented by nuclear plant workers from each participating country, based on their reports the previous day. All of the proposed demands appeared to be concrete and of great importance, including the abolishment of subcontractor employment systems at nuclear plants; establishment of life-long health management systems for nuclear workers; expansion of the number of nuclear workers to be covered by nuclear worker compensation systems; and a policy shift from decommissioning nuclear plants, which exposes workers to heavy radiation doses, to long-term strict management of nuclear facilities.
Im Dongin, from South Korea reported on issues such as radiation dose management for nuclear plant workers. He heads an association of labor unions formed by workers engaged in radiation dose management at the Hanul NPP. He claimed that there was a wide gap between wages and welfare benefits received by radiation dose management workers and those paid to the electric power company’s regular employees. This is because radiation dose management is outsourced and companies receiving contracts change every several years, meaning the workers’ employers also change. He said this situation resembled that of the water-treatment workers reported by Kim the previous day. Although the radiation-dose management workers lacked rights initially, they later organized labor unions and jointly fought to improve their working conditions. Recalling the hardships they had to undergo in their struggles, at times his eyes were filled with tears.
Japanese speaker Minoru Ikeda had received the greatest number of questions from participants the previous day. He noted that Japanese nuclear plant subcontracted workers have no labor unions, and  lack means of expressing their anger or complaints under current circumstances.
At the end of the session, Nasubi, the chairperson of this symposium and a member of the Radiation-exposed Workers’ Solidarity Network, summed up the main points of the reports and discussions, making the following proposals based on them.
1) Developing international exchanges of nuclear workers through data collection and information sharing.
2) Strengthening international solidarity with and support for “liquidators or clean-up workers” in Ukraine.
3) Taking joint actions internationally to help exposed workers gain rights.
The panelists and other participants expressed their support for his proposals by applauding.
The reports and discussions held during the two-day event revealed that the current situation and the way of thinking of nuclear workers in the four participating countries differed from each other. However, they also face a common problem– that they have yet to formally obtain workers’ rights and compensation. The symposium, filled with enthusiasm and passion, concluded with participants confirming that they would promote international joint actions while striving to deepen their mutual understanding.
(Mikiko Watanabe, Radiation-exposed Workers’ Solidarity Network)