On April 23, TEPCO announced that it had agreed to exchange, through amendments to balance sheets, a part, 434 kg, of the 2.5 tons of plutonium that it owns in France for the same amount of plutonium held by a German power company in the UK. With the decommissioning of Fukushima Daiichi NPP Unit 3, TEPCO no longer has any use for either MOX fuel now being processed or plutonium, while the German company finds itself unable to process MOX fuel due to the closure of a processing factory in the UK, and thus the two sides found themselves with matching interests. The German side will now process the MOX fuel in France, and TEPCO will have a part of the plutonium stored in France now stored in the UK.

The US-Republic of Korea (ROK) civilian nuclear cooperation agreement was signed in November 1972 and came into force in March 1973. At the time, it was to be valid for 30 years, but this was extended to 41 years when an amended agreement was signed in May 1974. This agreement is due to expire in March 2014. The two countries have been negotiating a renewal since October 2010, but have been unable to reach a compromise. On April 24, it was announced that agreement had been reached on a two-year extension.
The renewal negotiations stalled because the ROK side is demanding a comprehensive agreement on uranium enrichment and the reprocessing of spent nuclear fuel. An ROK government official has been reported as stating that the ROK sense of rivalry has been stimulated by the fact that “Japan is allowed to do these.”
The reprocessing method that the ROK is attempting to introduce is a dry form of reprocessing known as pyroprocessing, in which the oxidized spent nuclear fuel is reduced to metals, from which the fission products are then separated by electrolysis. The ROK side is claiming that since the minor actinides are not separated from the plutonium when it is extracted, this method is more proliferation resistant. The US side, however, does not acknowledge that the method is more proliferation resistant and maintains that both reprocessing and enrichment contravene the 1992 Joint Declaration on the Denuclearization of the Korean Peninsula.
Having for the time being extended the validity of the agreement, the two countries will now continue negotiations every three months.

On April 17, 20 MOX fuel assemblies for the Kansai Electric Power Company (KEPCO) Takahama NPP Unit 3 were loaded onto two specialized UK-registered ships (the Pacific Heron and Pacific Egret) and began their journey from the French manufacturer to Japan. The two ships are armed and the idea is that they will escort each other. The ships will round the Cape of Good Hope and take the southwest Pacific route, apparently due to arrive at Takahama NPP’s private port in late June.
The consignment was supposed to have been shipped in the spring of 2011, but was postponed due to the Fukushima Daiichi NPP accident. Takahama Unit 3 has been shut down since February 2012, but KEPCO is reportedly planning to apply to the Nuclear Regulation Authority to restart the reactor as early as July this year. However, loading of the MOX fuel is not yet scheduled.

On May 30, the Nuclear Regulation Authority (NRA) ordered the suspension of preparations for a restart of trial operation of Japan Atomic Energy Agency’s (JAEA) prototype fast breeder reactor, Monju, due to failure to carry out roughly 10,000 inspections within the facility, and the ensuing sloppy response. With the exception, for example, of checks necessary for maintaining security, activities connected with pre-operation work, including an exchange of fuel, are suspended. The suspension will be enforced until the NRA has completed its assessment of the report on the implementation of improvements related to the suspension order. A major reason for the NRA issuing this very severe order is that not only the non-inspection of equipment and time between inspections were unilaterally altered without taking necessary procedures, even after the submission of a flawed report on the situation no new measures were taken. JAEA president Atsuyuki Suzuki announced his resignation on May 17.

On March 18 at TEPCO’s Fukushima Daiichi Nuclear Power Plant, a rat somehow gained entry to an outdoor electrical junction box, resulting in a loss of power when it caused a short by touching a terminal. The spent fuel pools of Units 1, 2, and 3 (now undergoing decommissioning due to the March 2011 accident) and the common fuel pool could not be cooled from between 19 and a half to 29 hours. On April 5, while installing a steel mesh fence as a countermeasure, a wire from the steel mesh came into contact with a terminal in the junction box, causing another short and making the cooling for Unit 3 spent fuel pool inoperable for three hours. Furthermore, on April 22, two dead rats were found inside an outdoor transformer, causing the Unit 2 spent fuel cooling to be suspended for 4 hours while the rats were removed and the transformer inspected. 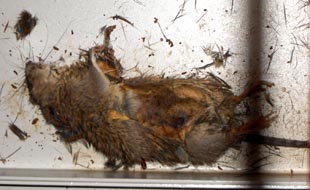