State of the Plant
Many of the measuring instruments installed in the Fukushima Daiichi Nuclear Power Station (FDNPS) measuring system continue to malfunction as a result of the accident. Although there is no guarantee of the accuracy of values being measured, if the values from the measuring instruments are taken as the premise, from the water temperature in the containment vessels and the spent fuel pools, and from the releases of Xenon-135, for example, it can be estimated that the state of the reactors is stable.
From assessments made by Tokyo Electric Power Company (TEPCO) alone, even now 10 million Bq/h of radioactive substances are being released into the atmo 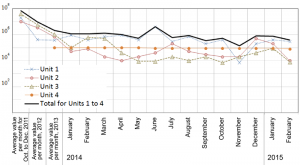 1. State of Operations concerning Spent Fuel Pools
Removal of fuel assemblies from Unit 4 began in November 2013, and of the 1,535 (1,331 spent and 204 new fuels) assemblies stored in the Unit 4 spent fuel pool (SPF) at the time of the accident, 1,355 (including three damaged assemblies) have been transferred to the common pool and 180 new assemblies have been transferred to the Unit 6 SPF (December 22, 2014).
Measures are being implemented at Unit 3 to reduce the radiation dose level in preparation for the work of removing the fuel, but the level is still far above the target level of 1 mSv/h and additional measures are now being carried out. Furthermore, work to remove large pieces of debris that fell into the SPF in an accident that occurred in August 2014 had been suspended, but resumed again on December 17.
As preparatory work for the dismantling of the cover in place around the Unit 1 reactor building, application of an anti-dispersal agent to prevent dispersal of radioactive substances remaining in the building was begun on October 22, 2014. From October to December, some of the cover roof panels were removed in order to check the conditions inside. Dismantling of the cover is scheduled to begin from March 2015.
There has been no great progress in Unit 2.

2. The Problem of Contaminated Water
According to an estimate by TEPCO, roughly 800 to 1,000 m3 of groundwater are flowing into FDNPS Units 1 to 4 per day, 300 m3 of which is flowing into the reactor buildings. Measures taken to suppress the flow of groundwater are as follows.
Groundwater pumping wells have been installed on the land side of the site as a “groundwater bypass” to reduce the inflow of groundwater by pumping it up and releasing it into the ocean. (Operation begun in April 2014, 73,806 m3 of water having been released up to January 29, 2015.) According to TEPCO, combined with the water suppression measures at the high-temperature incinerator building, groundwater inflow has been reduced by 100 m3 per day.
Pumping up groundwater from the subdrains in the vicinity of the buildings and releasing the water into the ocean. (TEPCO expects that this will reduce groundwater inflow into the buildings by up to 150 m3 per day.) TEPCO plans to release the pumped-up water into the ocean after purification. (The release criteria are 1 Bq/L for Cs-134 and Cs-137, 5 Bq/L for total beta ray emitting nuclides, and 1,500 Bq/L for Tritium.)
Construction of an inland water barrier (creation of a frozen earth barrier by burying 1,549 refrigeration pipes and 321 temperature measuring tubes at set intervals around Units 1 to 4). Although targeted to begin operation during March 2015, the work progress rate is low, at 19.1% on the land side and 0% on the sea side, and thus achievement of the target is unlikely.
Removal of highly contaminated water flowing from buildings into trenches on the sea side. (Having failed to stop the water by freezing it at the junctions between the trenches and the buildings, the insertion of packing materials consisting of a mixture of concrete and other materials was begun on October 16, 2014. However, gaps occurred and it proved impossible to stop the flow of contaminated water.)
Operation of the Advanced Liquid Processing System (ALPS). (The three existing systems, an additional three systems and a high-performance ALPS system installed with government subsidies.) These are used to separate contaminants, including nuclides, from contaminated water, while tritium still remains in the treated water. (See Figure 2 for an overall view of state of work progress.) 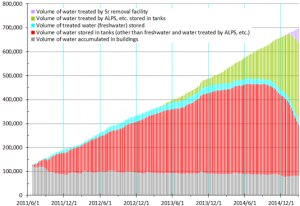 Figure 2. Total Water Volume (in Buildings and Tanks) of Contaminated and Treated Water (as of February 26, 2015)

Addition of a strontium removal function to the cesium removal equipment (KURION, SARRY), and introduction of mobile strontium removal devices (one system of the three systems being operational) and RO (reverse osmosis) concentrated water treatment equipment (January 10, 2015).
At the same time, construction of a sea side water barrier, prevention of leaks from holes punctured in the sides of buildings (scheduled to be completed in FY2017), and the increased installation of tanks is also being carried out.
TEPCO also announced on February 24 that contaminated water that had accumulated on the roof of the large hatch of the Unit 2 reactor building (Cs-137: 23,000 Bq/L, Cs-134: 6,400 Bq/L, and total beta ray emitting nuclides: 52,000 Bq/L) had been draining to a location outside the plant harbour via a drainage channel (drainage channel K) each time rain fell. TEPCO had known that the concentration of radioactive substances in the drainage channel had been rising from measurements first taken in the drainage channel in April 2014, but had neither taken any preventive measures nor reported the outflow.

3. Others
On February 12, a device making use of cosmic ray muons was installed beside Unit 1 in order to investigate the state of the molten fuel. Since muons have extremely high penetrability, it is hoped that it will be possible to use them to locate the molten fuel, which has a high mass number and density and is therefore relatively resistant to penetration. However, as far as can be determined from the results of a demonstration test carried out at the SFP at Tokai Daini Nuclear Power Plant, the resolution is low and it is thought that detailed inspection is not possible.
It has been discovered that TEPCO had diluted the anti-dispersal agent sprayed to prevent the dispersal of coarse particulate dust containing radioactive substances to one-tenth of that recommended by the maker and had also greatly reduced the number of applications of the agent. These reductions took place between August 2012 and sometime in the summer of 2013.
Industrial accidents are also rising sharply. In FY2013, the number of industrial accidents, excluding cases of heat stroke, was 23, but this had risen to 40 up to November 2014. One worker fatality occurred on January 19, 2015, and a further fatality also occurred at Fukushima Daini Nuclear Power Station on January 20.