Pros and cons of restarting Units 3 & 4 of Takahama NPP and Units 1 & 2 of Sendai NPP -Two district courts hand down opposite rulings- Nuke Info Tokyo No.166

The nuclear accident that occurred at the Fukushima Daiichi Nuclear Power Station (FDNPS) in March 2011 threw doubt on Japan’s traditional nuclear power policy. Twenty months have already passed since all Japanese nuclear power plants (NPPs) went offline in response to the public outcry against nuclear power generation and the introduction of new, stricter regulations on nuclear plants. The government finalized the nation’s basic energy policy in April 2014, strongly urging power companies to restart operations at their nuclear power plants on condition that they take the necessary measures to secure safety of the plants’ operations. Moreover, the government set up a number of related councils, comprised mainly of pro-government intellectuals, and obtained their consent for reactivation of the plants’ reactors.

In order to restart the nuclear reactors, the power companies which own them have to clear the hurdles set by the Nuclear Regulation Authority (NRA). After the Fukushima accident, the highly independent NRA, launched in 2012, has distanced itself from the traditional position that “nuclear accidents cannot happen”, and has created new regulatory standards based on the premise that “severe nuclear accidents can happen.” It was then decided that the applications for restarting nuclear reactors filed by power companies should be checked for compliance with these revised standards.

Accordingly, as opponents of reactor restarts, we have maintained a watch on the following two points involving NRA.

1. In the first place, if a severe accident occurs, are the revised standards strict enough to bring the accident to a conclusion without affecting local residents and citizens?
2. Is NRA conducting the safety screening appropriately, without overlooking or fudging any issues?

As of May 2015, 11 power utilities have filed applications with NRA for compliance checks to restart 24 reactors under the new regulatory standards. Of these, four reactors, Kyushu Electric Power Company’s Sendai NPP Units 1 and 2 of and Kansai Electric Power Company’s Takahama NPP Units 3 and 4, passed the compliance check in September 2014 and February 2015, respectively. Thus the two power companies have taken a step forward toward reactivation of their reactors. 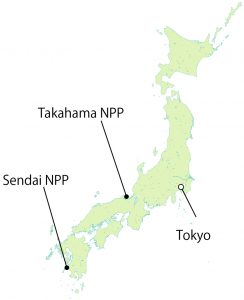 Allow me now to explain about the new NRA safety regulations and the compliance screening of NPPs. Although Prime Minister Shinzo Abe and Chief Cabinet Secretary Yoshihide Suga frequently stress that the new regulations are the “world’s strictest,” is this, in fact, true?

Verification of the causes of the Fukushima nuclear accident has yet to be completed, and under the current circumstances, it still remains unclear where the major problems lie. It is therefore essential for nuclear plants to guarantee that their measuring instruments function accurately and can provide correct data and information at the time of a severe accident. The new standards, however, do not contain any rules for guaranteeing this capability.
The new standards do not call for a change in the fundamental design concept for NPPs, nor reinforcement of the existing facilities and equipment. Instead, it recommended establishment of transportable facilities and equipment, and allowed the plant operators to deal with a possible severe nuclear accident by using such facilities and equipment.
The new standards approved the power utilities’ claim that the probability of massive earthquakes, tsunami, and volcanic eruptions is small. Concerning the prediction of earthquake intensity, the new standards did not call for construction of solid structures capable of withstanding a huge earthquake of the greatest intensity ever experienced in Japan. It is extremely difficult for us to predict volcanic eruptions on the basis of existing scientific technology and knowledge. Nevertheless, NRA left the work to predict and devise countermeasures for volcanic eruptions in the hands of the power companies alone, failing to seek any opinions from volcanologists.
As for equipment necessary to prevent serious accidents in pressurized water reactors (PWR), the new standards allowed the nuclear plant operators to take up to five years to install filtration vents.
The work to review many conventional criteria for assessing the soundness of nuclear power generation technology has yet to be completed. Currently, a serious error in the formula for the prediction of neutron irradiation embrittlement is facing criticism, and official debate continues on this problem.
It remains unclear who is authorized, and on what legal grounds, to issue orders to people engaged in work in highly radioactive environments.
Although the new standards say the hydrogen concentration rate in reactor buildings should be held below 13% in order to prevent hydrogen explosions, it is impossible to guarantee the uniformity of concentration in the air. In addition, it remains uncertain if the equipment for reducing the concentration rate to below 13% will work as expected.
While NRA has left the work of formulating anti-disaster and evacuation plans up to local governments and residents, is still unclear who is responsible for such policies. As a result, it is feared that local residents may be adversely affected by a possible nuclear accident.

When we look at this reality in an honest way, we come to the realization that clearing NRA’s safety screening does not necessarily mean that a plant’s safety is guaranteed. In fact, NRA Chairman Shunichi Tanaka has already declared this to be the case. He admitted this apparently because the nuclear watchdog’s basic position is to go along with the government’s policy to restart operations at NPPs.

It is not strange that two district courts hand down totally opposite rulings concerning provisional injunction against the resumption of NPP operations. The difference in rulings stems from the courts’ basic positions, one attaching the greatest importance to prevention of exposure of local residents to radiation at the time of a nuclear accident, and the other, claiming that the probability of a nuclear accident is so low that the new NRA regulations are not unreasonable. In other words, the former considers that the “personal rights fundamental to survival” are of the utmost value, while the other maintains that this is not necessarily so.

This injunction issue may be classified as a “trans-science question; one that can be asked of science, but not answered by it.” The term “trans-science” was coined more than 40 years ago by Alvin Weinberg, an American nuclear physicist. It is anticipated that the basis for our society in the future will be that opinions and judgments of local residents and ordinary citizens will be weighed equally with or given more gravity than those of specialists in nuclear power technology and legal experts.