The Controversial Restart of the Sendai Nuclear Power Station -Nuke Info Tokyo No. 168

On August 11, 2015, Kyushu Electric Power Company activated Sendai Nuclear Power Station Unit 1 (PWR, 890 MW, located in Satsumasendai City, Kagoshima Prefecture, commissioned in June 1984), and the reactor began power generation and transmission on the 14th. The company started regular operation of the NPS in early September. This marked the first restart of a nuclear power reactor in Japan that has been approved under the new government regulation standards established after the accident at the Tokyo Electric Power Company’s Fukushima Daiichi Nuclear Power Station. However, the approval process for the restart included serious defects, and the restart is therefore far from acceptable.

Firstly, the restart is against public opinion, which seeks a nuclear-free society. It was a response to these opinions that the government Basic Energy Plan the Abe Cabinet finalized in April 2014 stated, “Japan will reduce dependence on nuclear power energy as far as possible.” The Japanese government, however, seems to be launching political measures that would increase dependence on nuclear power. Before the restart of the Sendai reactor, the government should have at least formally decided on the policy of realizing freedom from nuclear power, determined by when that freedom would be achieved, and should have clarified how long residents in the vicinity of the nuclear power station would be exposed to nuclear risks. 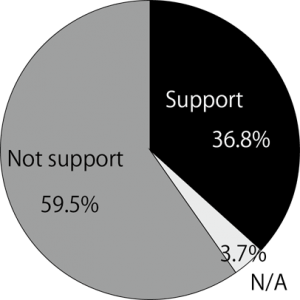 Question; Do you support a restart of the Sendai Nuclear Power Station?
Result of the opinion poll by Minami-nippon Shimbun in May 2014.

The second problem is that the Sendai NPS Unit 1 is old; 31 years have passed since it was commissioned. Old reactors show deterioration in the characteristics of their materials and equipment function, and it is stipulated that those that have been in service for more than 30 years have an assessment to rate their aging. The governmental Nuclear Regulation Authority (NRA) used to take the position that the aging assessment and the restart approval are unrelated, but probably because of severe criticism, NRA gave the green light to the operator’s Aging Technical Assessment Report for the Sendai NPS Unit 1 reactor on August 5, 2015, immediately before the planned restart date of the reactor.

The original version of the report was submitted in December 2013, but it was only on July 3, 2015 that the operator turned in the revised version, which reflected the results of the reactor’s qualification assessment based on the new regulatory standards. It is doubtful that a substantial investigation of the report was possible within only one month.

Thirdly, the qualification appraisal of the Sendai NPS is highly problematic in terms of the assessment of influences from volcanoes and the determination of the basic earthquake ground motion, on which seismic design is based. Having five calderas (large volcanic craters) within a radius of 160 kilometers from the Sendai NPS makes it one of the most vulnerable to the risks of a gigantic volcanic eruption in Japan. However, the volcanic influence assessment of the Sendai NPS was extremely inadequate. As an example, the assessment states that a gigantic eruption is predictable by volcano monitoring, which volcanologists say is impossible. In addition, Kyushu Electric Power Company determined the reactor’s basic earthquake ground motion without evaluating the factors that are supposed to be evaluated, with NRA simply confirming the basic earthquake motion.

Finally, the evacuation program for locals includes considerable problems. Kagoshima Prefecture has not performed an evacuation drill for an NPS accident since October 2013. The evacuation program is the final safeguard for the protection of locals from exposure to radiation in the case of an NPS accident, and an evacuation drill should have been conducted immediately before the restart of the reactor to ensure that the population can be safely evacuated. However, the prefecture prioritized the restart over the drill. In addition, for those who need assistance to evacuate, the prefecture has mapped out a program for the nursing homes located only within a radius of 10 kilometers (17 homes) of the reactor. Can the lives of residents be protected in this way? 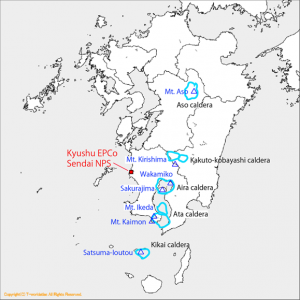 In addition, there is the problem of nuclear plant workers who are exposed to radiation during work. While they are exposed to radiation even during regular reactor operation, NRA raised the exposure limit under emergency conditions (from 100 mSv/year to 250 mSv/year) on August 5. This limit is applicable only to those who agree to the limit in advance. However, workers will nevertheless be subjected to the risks of exposure to radiation, and the new limit is an infringement of human rights.

As NRA Chairman Shunichi Tanaka mentioned, there is no absolutely safe nuclear power station. In addition, as the Fukui District Court stated in its decision on the petition filed to bar the restart of the Ohi Nuclear Power Station Units 3 and 4, located in Fukui Prefecture, “an organization involved in an undertaking that may cause tremendous harm to the lives and bodies of many people and their resources for living once an accident occurs shall be required to ensure safety and high reliability in accordance with the severe degree of the possible harm.” However, concerning the restart of Sendai NPS, the national government, NRA, Kyushu Electric Power Company, and local municipalities have all treated safety and reliability extremely casually. NRA should withdraw the approval of the restart of the Sendai NPS Unit 1 and Kyushu Electric Power Company should shut it down.