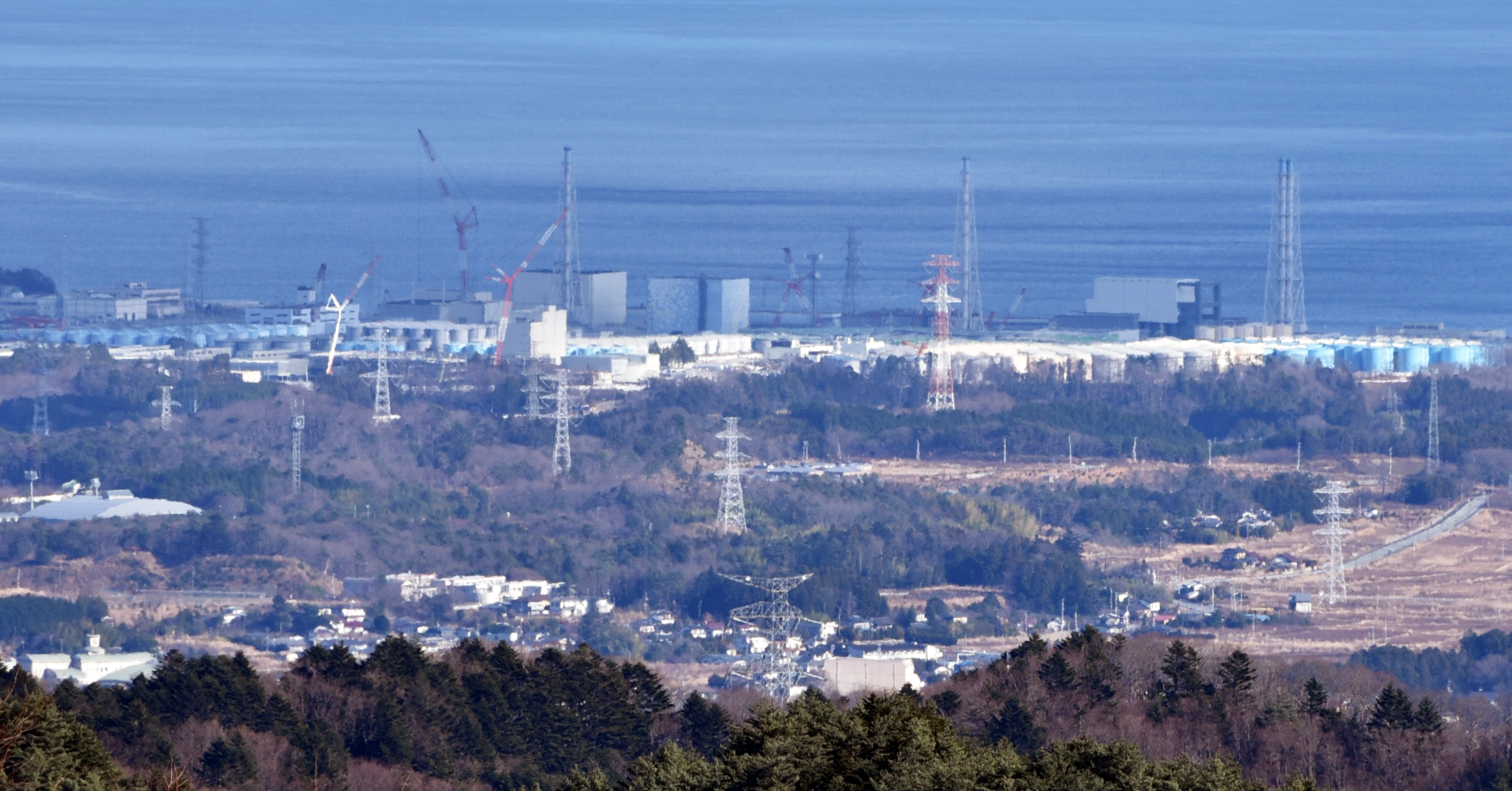 Fukushima Daiichi NPS taken from Kawauchi Village, 15 km away. Reactors No. 1 through 4 can be seen from left to right (the building surrounding Reactor No. 3 was blown away when it exploded so is not visible). A large number of tanks holding contaminated water can also be seen. (Photo by Ryohei Kataoka (with cooperation from Ruiko Muto), 28 December 2015)

1) After 5 years, still very little is known about the causes and effects of the Fukushima nuclear disaster

A whole five years will soon have passed since the severe accident occurred at the Fukushima Daiichi Nuclear Power Station (FDNPS). Nonetheless, the causes of the accident have not yet been clarified. Which was the main cause of the accident: the earthquake, or the tsunami? It is certain that both were implicated, while those who are promoting the restart of other long-idle nuclear power stations in Japan seem to believe that gigantic barriers, like those that can be seen near the Hamaoka NPS, owned by Chubu Electric Power, and the Kashiwazaki–Kariwa NPS, owned by Tokyo Electric Power Company, will be sufficient to protect them against the onslaught of an enormous tsunami. However, do we believe that barriers could be a fundamental solution?

For many of the breakdowns that occurred in FDNPS Units 1 to 4, it is still unknown how, for what reasons, and in what sequences they occurred, including those of the nuclear reactors, containment vessels, and other nuclear facilities. Currently, many other nuclear power stations are under government investigation to assess whether or not they meet the new control standards. However, these investigations are not reliable because the causes and consequences of the breakdowns during the FDNPS accident have not yet been persuasively clarified.

At the site of the crippled FDNPS, post-accident work is facing extreme difficulties and there is little prospect for a conclusion in sight. The truth is that the objective facts upon which a scientific and technical discussion must be based are unknown, thus making it impossible to formulate plans. The reason why objective facts are unavailable is that the site is too highly contaminated with radioactivity, making direct investigations of the interior of reactor buildings, damaged facilities, as well as the location of molten fuel and its condition unthinkable. The underground areas of the turbine buildings and nearby facilities are submerged under highly contaminated radioactive water and cannot be investigated.
In February 2015, about one year ago, an investigation team from the Niigata Prefecture Technical Committee on Nuclear Power Safety Management entered FDNPS for a short time to check the condition of damage on the fourth and fifth floors of Unit 1. One of the team members was exposed to a dose of about 8 mSv. As of January 10, the air dose rate near the main gate of FDNPS is as high as 0.748 µSv/h.

The major points of the FDNPS accident whose details remain unknown are listed below:
• There is a piece of evidence that suggests that the emergency AC power supply of Unit 1 was lost before the recorded tsunami arrival time. It is therefore natural to conclude that the isolation condenser pipes were damaged by the earthquake. It is highly likely that this pipe damage directly caused the meltdown in the Unit 1 reactor core.
• As for Units 2 and 3, the reactor core isolation cooling system (RCIC) stopped automatically, but the cause is unknown.
• The Unit 1 safety relief valve (SRV), which acts to release excessive reactor pressure, very probably failed to work. However, neither the facts nor the reasons associated with the failure are known.
• Fire engines were used to pour water over the reactors to cool them down. The water did not actually reach the reactors and flowed somewhere. The amount of water used  and its whereabouts are unknown.
• At Units 1, 2 and 3, pressure release from the containment vessel through the vent could not be performed as scheduled. At Unit 2, it is not known whether pressure release through the vent was successful or not.
• The processes and causes of the hydrogen explosions in Units 1 and 3 are not known at all. They are suspected to have been associated with pressure releases through the containment vessel vent, but the details are unknown.
• Where the hydrogen explosions occurred is also unknown. Regarding the explosion in Unit 1, it is suspected that an initial explosion occurred on the fourth floor and a secondary explosion on the fifth floor, while TEPCO explains that the explosion occurred only on the fifth floor, without providing reasons. In the case of Unit 3, TEPCO has admitted that the explosion occurred both on the top floor and the floor below.
2) Admidst continuing damage, questions of health and safety remain unanswered

The M9.0 Great Eastern Japan Earthquake of March 11, 2011, and the subsequent tsunami, severely damaged the eastern part of the Japanese archipelago, especially the Tohoku region, including Iwate, Miyagi, and Fukushima Prefectures. The number of fatalities and missing persons resulting from the earthquake and tsunami are 4,673 and 1,124 in Iwate; 9,541 and 1,237 in Miyagi; and 1,613 and 198 in Fukushima (as of December 10, 2015). In addition, there are many who lost their lives “in association with the earthquake disaster.” Their numbers are 458 in Iwate, 918 in Miyagi, and 2,007 in Fukushima (for Iwate and Miyagi, as of the end of September 2015, and for Fukushima, as of December 28, 2015).
Among the three prefectures, Fukushima is far higher than the other two in the number of fatalities associated with the earthquake disaster. In Fukushima, the number is actually higher than the total number of those killed by the earthquake and tsunami. A significant number of people decided to take their own lives, having despaired of their future, because of radioactive contamination and air dose rates. This is a great tragedy. Some people lost hope for life, having been forced to evacuate from their hometowns, and have become mentally and physically exhausted by life in cramped temporary housing. It is only reasonable that those who are used to living in large houses are unable to endure life as evacuees, especially when that may look like continuing for the foreseeable future.
In Fukushima, whether evacuees, including those who left their hometowns voluntarily, can return or not, and whether they may choose to return or not is emerging as a serious social and political issue. The national government aims to withdraw the evacuation orders by March 2017, provided that the annual air dose rate is no greater than 20 mSv. However, the reference rate of 20 mSv/y is unspeakably high.
The unit sievert, or Sv is a measure of the biological effect of ionizing radiation, but it is a relatively ambiguous concept from the scientific point of view. A specific case clearly shows this ambiguity: In 1991, Nobuyuki Shimahashi, who was a healthy young man, died of chronic myelogenous leukemia at the age of 29. Later, in 1994, authorities acknowledged that his death had been associated with the work he had been engaged in. Mr. Shimahashi had worked at the Chubu Electric Power Hamaoka NPS, where he was exposed to a dose of 50.93 mSv over a period of 10 years. His exposure was about 5.1 mSv/y.
In a legally-specified  radiation controlled area, workers who handle radiation and radioactive materials are required to behave carefully. Eating and drinking are prohibited and there is no washroom. Minors are not admitted. A zone is designated as a radiation controlled area when the dose rate exceeds 5.2 mSv/y. The reference level specified by the International Commission on Radiological Protection (ICRP) for the general public is 1 mSv/y or lower. However, a statement issued by the ICRP on March 21, 2011, immediately after the Fukushima accident, says that “the reference level for the general public may be between 1 mSv/y and 20 mSv/y after such an emergency condition has returned to normal.” Nevertheless, if a person lives for five years under a dose rate of 20 mSv/y, the accumulative exposure may reach 100 mSv. The national government should ascertain scientifically whether exposure to such a large dose of radiation is carcinogenic or not. In consideration of these cases, the reference dose level used for the return of evacuees is too high. It is understandable that 808 people in 206 households of Minami Soma City, Fukushima Prefecture, filed a lawsuit with the Tokyo District Court against the national government (in 2015) protesting that the withdrawal of the evacuation order from the city is illegal.

3) Possibility of increase in incidence of thyroid cancer among children

Radioactive waste: Waste generated from decontamination is contained in flexible container bags. Large piles of bags have accumulated throughout Fukushima Prefecture, these ones are in the Miyakoji District of Tamura City. The air dose rate was 0.262μSv/h (Photo by Ryohei Kataoka, (with cooperation from Ruiko Muto) 28 December 2015)

The disposal of radioactive waste exceeding 8,000 Bq/kg resulting from the FDNPS accident has made no progress. The original plan was to build one disposal site in each of the five prefectures, Tochigi, Miyagi, Ibaraki, Gunma, and Chiba. Although five years has passed since the accident, no disposal site has yet been mapped out.
Throughout Fukushima Prefecture, there are heaps of contaminated radioactive rubble and refuse packed in flexible container bags. These are waste materials that are supposed to be stored at an intermediate storage site. Although the location of the site has been decided, most of the landowners of the planned premises have not been identified. When the intermediate storage site will be completed remains unknown.
This article has introduced some of the difficulties Japan is facing after the Fukushima nuclear accident. No nuclear power plant is free from the risk of an accident. Even Japan, which is known for its outstanding technological development, cannot find effective ways to deal with the aftermath of the nuclear accident.