How Should We View Last December’s India-Japan Summit? ~Nuke Info Tokyo No. 170 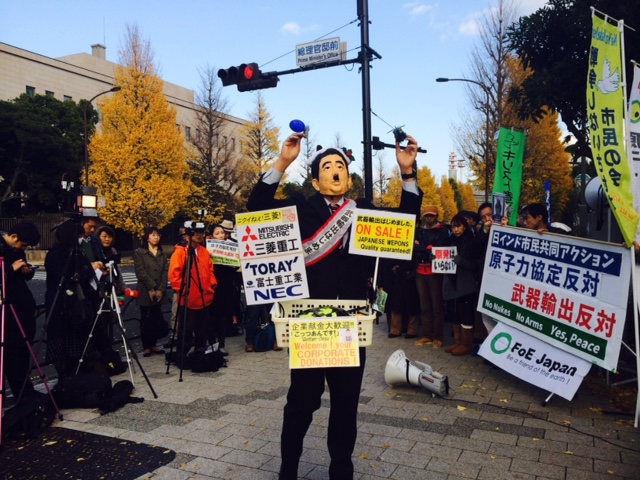 Protests against the India-Japan Nuclear Cooperation Agreement were held around the world on December 12 2015. A man in an Abe/Hitler mask was at this one outside the PM’s official residence in Tokyo

Prime Minister Abe visited India on December 12 last year, where he held a summit with Indian Prime Minister Modi at which they signed a memorandum on entering into a Nuclear Cooperation Agreement based on the assumption of nuclear exports to India. Problems with the India-Japan Nuclear Cooperation Agreement were brought up in NIT 164 and 169, but I would like to consider them anew in light of the significance of the recent summit and memorandum.

India : Nuclear Weapon Possessing State
The most important point in considering a nuclear agreement with India is that India has entered into neither the Non-Proliferation Treaty (NPT) nor the Comprehensive Nuclear-Test-Ban Treaty (CTBT), but possesses nuclear weapons. While claiming it will abolish its nuclear weapons, India refuses to sign the NPT, calling it an unequal treaty; nor has it ratified the CTBT because of issues such as its recognition of subcritical experiments. On the other hand, India possesses nuclear weapons and has conducted nuclear testing twice, in 1974 and 1998. The plutonium used in the 1974 test, in particular, was produced using a nuclear reactor provided by Canada and America for peaceful purposes.
India’s nuclear testing has come under criticism worldwide, and the country has become alienated from international atomic energy development, to the point that in 2008 India voluntarily ceased nuclear testing, promised no preemptive use of its nuclear weapons, and ratified the IAEA Additional Protocol, which allows observation by the International Atomic Energy Agency (IAEA) of nuclear facilities declared by India and the India-United States Civil Nuclear Agreement to be for civil use.
Currently India continues manufacturing plutonium, highly enriched uranium for their nuclear weapons program (aside from India, only Pakistan, North Korea and Israel continue producing these materials for military purposes), it is striving to modernize its nuclear weaponry, and shows no inclination to join either the NPT or the CTBT.

The Significance of the India-Japan Nuclear  Cooperation Agreement
There are two major implications of Japan’s concluding a nuclear cooperation agreement with India. The first is that it raises the level of acceptance of India as a nuclear weapon state, and the second is that it helps India proceed with nuclear development.
India possesses nuclear weapons, but it is not recognized as a nuclear weapon state under the international nuclear non-proliferation system. Since 2008, however, a number of countries, including the U.S., France and Russia, have signed nuclear cooperation agreements with India while knowing that India possessed nuclear weapons. Furthermore, as a country that has been the victim of atomic bomb attacks and continues to appeal for nuclear disarmament and non-proliferation, Japan would be promoting acceptance of India’s status as a nuclear weapon state if it entered into a nuclear cooperation agreement with that country while it continues to expand its nuclear arsenal.
Since 2008, France’s Areva and America’s GE Hitachi and Westinghouse have drawn up plans to construct six nuclear reactors each in India, and Russia’s Rosatom, an additional eight. Currently, though, with the exception of Russia’s, construction of the imported reactors is not proceeding. There are two reasons for this. First, India’s nuclear energy damage liability law has certain peculiarities. Typical nuclear energy damage liability laws focus liability on the nuclear power companies, whereas India’s enables the nuclear power companies to seek compensation for damages from the nuclear plant manufacturers. Because of the risk of liability, nuclear plant manufacturers are having second thoughts about going ahead with construction in India. Second, if Japan does not conclude a nuclear cooperation agreement with India, it would consitute a reason for the country not to import Japan’s nuclear power equipment. It is said, for example, that India would like to obtain Japanese-made reactor pressure vessels because of their high reliability. These two factors are intertwined and explain why construction of imported reactors has hardly proceeded at all in India.
Note that India has long-term plans to extract plutonium from spent fuel and use it in fast breeder reactors, so it is requesting that Japan recognize that India will carry out reprocessing of spent fuel retrieved from Japanese-made nuclear reactor equipment, and it appears that Japan will comply. If Japan does comply, it will be the first time for  Japan to allow reprocessing of spent fuel by the country it is exporting nuclear equipment to. 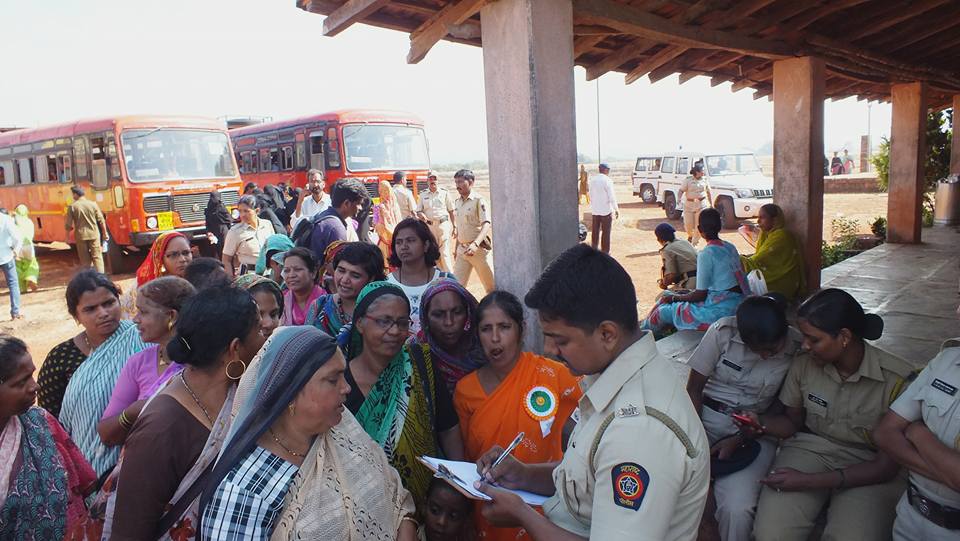 Protests in Jaitapur, India, where over 1,000 citizens, including many women, deliberately got themselves arrested as part of a civil disobedience action called ‘Jail Bharo’ to protest the Nuclear Agreement and PM Abe’s visit to their country on December 12 2015

Appraising the India-Japan Summit
In light of this, how should we view the India-Japan summit of last December?
In a joint statement, the leaders of India and Japan said the two countries share the hope that nuclear weapons will ultimately be abolished, and they are seeking an early conclusion to negotiations on a treaty banning the production of fissionable materials for nuclear weapons. They also pointed out the importance of expediting the effectuation of the CTBT (requiring India to join it soon, as a country whose participation is needed for it to go into effect). On the other hand, the two leaders confirmed that once the technical details had been worked out, they would conclude the nuclear cooperation agreement. They also confirmed that India would cooperate to become a member of international export control groups such as the Nuclear Suppliers Group.
In a speech on December 14, Prime Minister Abe talked about the India-Japan Nuclear Cooperation Agreement, saying that if India conducts nuclear testing, ceasing cooperation and placing India outside the nuclear non-proliferation system would “not really be effective towards the total abolition of nuclear weapons and such,” stressing the significance of cooperation. Regarding this measure to cease cooperating, Kyodo News reported on December 17 that if India were to conduct nuclear testing, explicit procedures would be taken to halt immediately the reprocessing of spent fuel from the nuclear reactors exported by Japan.
At a press conference on December 14, however, Indian Foreign Secretary Jaishankar gave a different impression from the meeting with Prime Minister Abe, replying, for example, “I do not think the NPT itself is a particular obstacle to this negotiation”and “It has been a longstanding position of India that reprocessing is an integral part of our nuclear programme…any solution…will be in consonance with our longstanding policy.” Regarding the provision for cessation of cooperation in the event of nuclear testing, he commented: “Most countries in the world accept that India’s word is credible, that Indian committments (to voluntary discontinuation of nuclear testing) are serious.” The impression these statements give is backed up by a report appearing December 14 in India’s leading newspaper, The Hindu, of comments by Press Secretary Yasuhisa Kawamura that Japan was “not insisting on any  nullification clause” in recent negotiations.
The logic of concluding a nuclear cooperation agreement in order to include India in the nuclear non-proliferation system is exactly the same as that of America in 2008 when it prevailed on other countries’ governments to accept the IAEA Additional Protocol for India. However, even since 2008 when it was supposed to have become part of the nuclear-non-proliferation system, India has zealously expanded its nuclear armament. The NPT system, on the other hand, has become progressively weaker in recent years.
At a time when the nuclear non-proliferation system is growing weaker, recognizing exceptions greatly increases the distance to the goal of abolishing nuclear weapons. The government is worried about the effect the India-Japan Nuclear Cooperation Agreement might have on the House of Councilors election this summer, so it has declared a firm course of submitting it to the current Diet. Regardless of when it is submitted, though, the problems with this pact remain unresolved. By no means should a nuclear cooperation agreement be entered into with India. Signatures are currently being sought for an international appeal opposing the India-Japan Nuclear Cooperation Agreement. We ask for your kind cooperation.