Recycling 8,000-Bq/kg decontamination-generated soil wastes should not be permitted

Soil and other wastes resulting from decontamination in Fukushima Prefecture are estimated to amount to a maximum of 22 million cubic meters (as of January 2015). The Japanese Ministry of the Environment (MOE) plans to store the soil wastes in one central interim facility, planned to be built to straddle the towns of Okuma and Futaba, Fukushima Prefecture. The soil wastes are scheduled to be relocated out of the prefecture to a final disposal site before May 2045, although the location of the final site is still undetermined. The land on which MOE plans to build the interim facility is owned, in individual parcels, by 2,365 persons, and as of the end of April 2016, only 113 owners had agreed that their land can be used for the interim disposal facility; that is, MOE has acquired only 2% (35 hectares) out of the entire construction area (1,600 hectares). In consideration of the area required outside the prefecture for the planned final disposal site, MOE aims to reduce the volume of the soil wastes by “recycling” them.
Projected recycling of soil wastes generated from decontamination
On June 7, 2016, MOE held the fourth meeting of the Strategic Study Group for Developing Technologies for Reducing the Volumes of and Recycling the Temporarily Stored Soil and Wastes Generated as a Result of Decontamination. The group agreed that, based on the relevant act concerning the handling of radioactive materials, the recycling of the soil whose total cesium-134 and cesium-137 concentration is 8,000 becquerels per kilogram (Bq/kg) or less should be permitted. (The cesium concentrations hereafter always refer to the total for the two nuclides.)
MOE explains that, while the soil wastes collected as a result of decontamination in Fukushima Prefecture alone would be recycled, they would be used in public construction projects throughout the nation: “The use of soil wastes is limited to public construction projects, and possible applications are ground elevation, coastal windbreak woods, seawalls, earth dikes, and land development” (Figure 1). 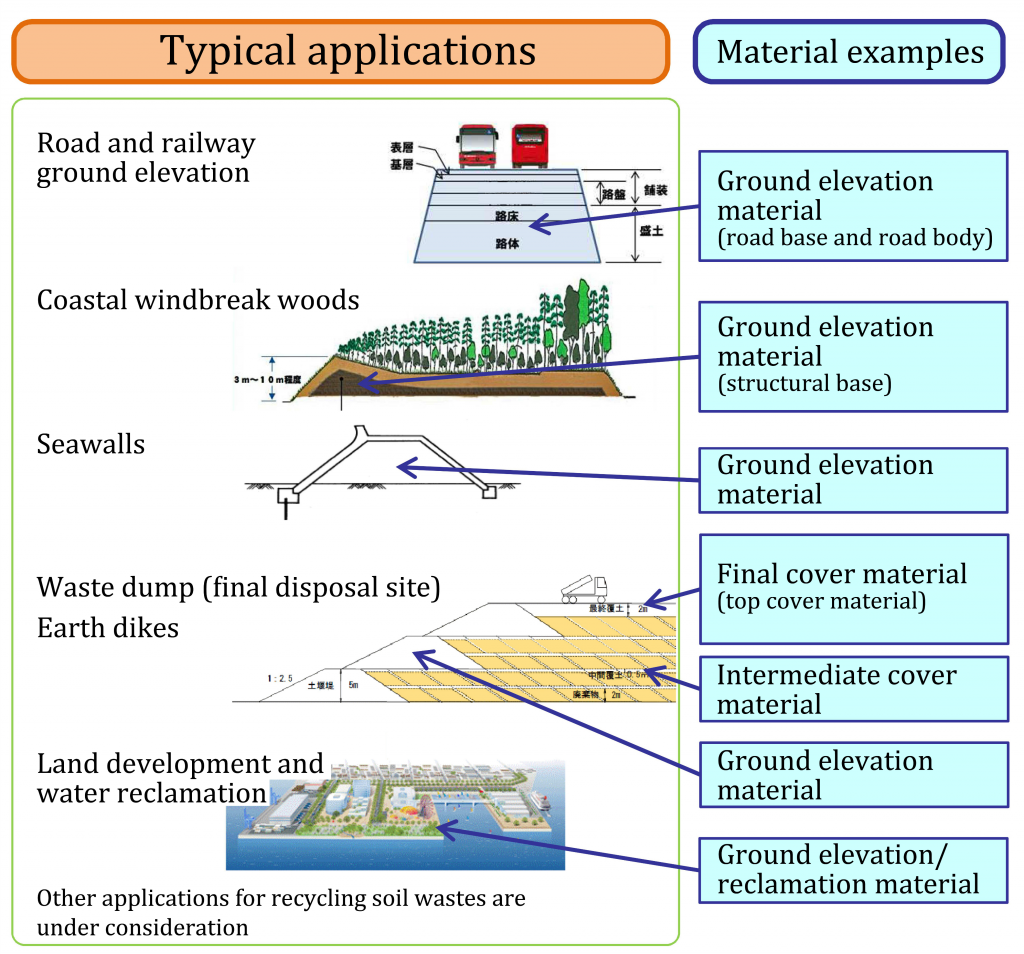 The MOE Study Group meeting also explained that the extra dose*1 to workers and residents would be 1 millisievert per year (mSv/year) during construction and the extra dose to residents after the completion of construction would be controlled to 0.01 mSv/year because of earth covering.
Probable spread of radioactive materials to the environment
According to the explanation by MOE, if the recycled soil is covered and shielded, radioactivity will be controlled and cause no harm. However, if a road constructed in this way subsides or is damaged, contaminated soil will be exposed, and may spread in the area. The soil is likely to contaminate groundwater and may reach farmland and residential zones. After the recent serious earthquake in Kumamoto and Oita in southwest Japan, roads collapsed and cracked at many locations. Coastal windbreak woods and seawalls may be destroyed if a tsunami occurs, causing the soil to spread into inland areas and the sea.
If decontamination-generated soil wastes are recycled, not only will construction workers be exposed to radiation, but also children who use the area as a playground will be influenced. In case of an accident, MOE plans to raise the extra dose limit from the initially planned post-construction additional dose of 0.01 mSv/year, on condition that the extra dose should still be lower than 1 mSv/year.
Contradiction of double standards
Concerning the cesium concentrations in radioactive wastes, MOE used to explain that, based on the Nuclear Reactor Regulation Law, 100 Bq/kg was the clearance level for safe recycling of radioactive wastes, and that 8,000 Bq/kg was the limit of safe waste disposal, based on the act concerning the handling of radioactive materials.
The Nuclear Reactor Regulation Law specifies that wastes exceeding 100 Bq/kg should be handled strictly as radioactive wastes, and that those at or below 100 Bq/kg, the clearance level, can be recycled for producing products used in society in general. However, because of criticism from citizens, such wastes have only been test-recycled in a limited variety of applications (concrete for construction and metal for benches).
The limit to the radioactive concentration of soil wastes specified in the Act on Special Measures to Handle Pollution caused by Radioactive Materials, which is 8,000 Bq/kg, is 80 times as highly contaminated as 100 Bq/kg, the clearance level specified in the Nuclear Reactor Regulation Law. Currently both the Nuclear Reactor Regulation Law and the Act on Special Measures to Handle Pollution caused by Radioactive Materials are valid, creating double standards.
Rubble generated as a result of the disaster of March 11, 2011 has already been recycled
On June 8, 2016, we held the second negotiation meeting with MOE on this issue (organized by FoE Japan). As an example of the recycling of rubble, MOE answered that 230,000 tons of rubble (concrete) of 3,000 Bq/kg or lower, having been gathered from the Fukushima Prefecture evacuation zones, has been used in a construction project along the seashores of the evacuation zone, to elevate the ground to create coastal windbreak woods*2. MOE explained that it measured the concentrations of radioactive substances, confirmed that the cesium concentration was 3,000 Bq/kg or less, and handed the rubble to the constructor. However, MOE answered that the constructor determined where and in what amount to use the rubble and the ministry was not informed of such information. MOE had instructed that the constructor should provide a shield of at least 30 cm in thickness, but the ministry was not informed of whether or not the constructor complied with the instruction. This indicates that MOE carries out extremely poor control of the recycling of rubble.
MOE allows the recycling of radioactive soil wastes, provided that it is controlled properly and used for specific applications. However, once the ministry entrusts the use of such wastes to a constructor, the constructor does not report to MOE thereafter, and the use of soil is left unchecked. The ministry does not consider the possibility of intentional substandard, shoddy construction. Irresponsible control of contaminated soil should be strictly prohibited to avoid the spread of radioactive substances in society.
Demonstration experiment in a temporary storage facility in Minami-soma City, Fukushima
The MOE Study Group strategy is to perform a demonstration experiment of the recycling of decontamination-generated soil wastes with a cesium concentration of less than 8,000 Bq/kg, at the temporary storage facility in Odakaku, Minami-soma City, Fukushima Prefecture. MOE is negotiating with the City to implement this experiment. The mayor has agreed, but landowners and residents have not.
In this planned demonstration experiment, one thousand flexible container bags of soil (1,000 cubic meters or about 1,800 tons) will be processed to reduce the volume in temporary storage and used for ground elevation, in order to demonstrate a model for recycling of soil wastes. In the demonstration experiment, waterproof sheets will be used to prevent radioactive substances seeping into the ground, dispersing into the air, or leaking out, and proper shielding will be provided by means of clean soil, aiming to convince people of the safety of soil recycling. After the experiment, the trial construction will be removed, and the soil will be restored to the bags.
If the standard for soil recycling is changed to 8,000 Bq/kg based on the Act on Special Measures to Handle Pollution caused by Radioactive Materials, the soil will very likely be used throughout Japan, even though there are limited applications. It would be a terrible mistake to use radioactive wastes in residential areas. MOE should withdraw the policy of using radioactively contaminated soil wastes in public construction projects.
(Ryohei Kataoka, CNIC)
1 Exposure dose excluding natural exposure dose
2 “Basic policy for the interim handling procedures for reusing construction byproducts generated by public construction projects in Fukushima Prefecture” (Support Team for Residents Affected by Nuclear Incidents, Nuclear Emergency Response Headquarters, Cabinet Office, October 25, 2013)