Fukushima Evacuees abandoned by the government

After the Fukushima nuclear accident, some 160,000 people were forced to leave their hometowns and evacuate the region. Even now, some 100,000 people are still forced to live as evacuees. (Fukushima Prefecture, “2012 Immediate Report on the Circumstances of Damage from the Great East Japan Earthquake,” December 28, 2015).  The numbers of voluntary evacuees, effectively those outside the mandatory evacuation districts who evacuated on their own, are believed to number approximately 36,000, according to media reports. (Asahi Shimbun, “Voluntary Evacuation, Toward an End to the Housing Provision Program.” May 17, 2015)
On June 12, 2015, the Japanese government announced plans to lift evacuation orders for the restricted residence areas (23,000 persons) and the zone under preparation for lifting the evacuation order  (31,800 persons), by March 2017 at the latest (see Fig. 1). Authorities also plan to uniformly terminate compensation for mental suffering to residents in these regions by March 2018. 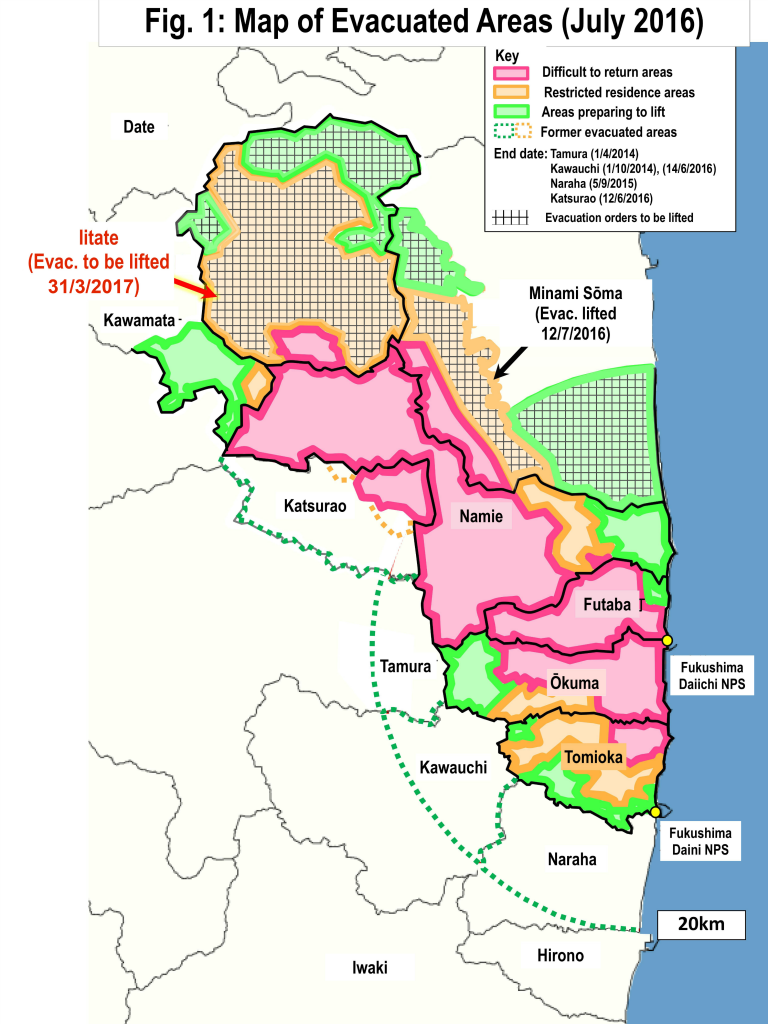 However, these decisions have completely disregarded the will of evacuees. According to a survey on residents’ return conducted by the Reconstruction Agency, most residents in the evacuated regions reported no intention to return, or that they had been unable to decide whether to return or not (See Fig. 2). Data for the youngest generation indicates they are the least likely to return. The main reasons residents cite for hesitation to return include concerns about the safety of Fukushima Daiichi Nuclear Power Station and anxiety about radiation, concerns about the provision of health care, the living environment, decaying of homes, and fears that the younger generation will not return, among others. (March 10, 2015 Reconstruction Agency,  “Four Years of Reconstruction, the Present Condition and Challenges”)
Residents’ needs ignored
The government has elected to lift evacuation orders based on the following conditions: 1) The annual air dose rate of radiation has been confirmed as estimated to be under 20 mSv; 2) Primary living infrastructure has been sufficiently restored; and 3) The prefecture, municipality, and local residents have conducted adequate discussions.
Concerning the air dose rates, under the recommendations issued by the International Commission on Radiological Protection (ICRP), and also under the Japanese domestic law on public annual exposures to radiation and the Nuclear Reactor Regulation Law, exposures are set at 1 mSv/year. In radiation exposure regulated zones,  limits are set at 5 mSv/year. Moreover, these limits disregard soil radiation doses. Many both inside and outside the affected regions have raised their voices in protest at the inadequacy of these standards for return and evacuation.
There is deep-seated criticism of the decision to mandate (and lift) evacuations based on measurements drawn from unreliable data, such as data taken from air dose rates which are unstable and have a tendency to fluctuate. For example, even though radiation levels in the air may have decreased, the concentration of radiation in the soil remains a serious concern.
For example, according to the Minami Soma Association for Recommended Evacuation Zones and Masuchika Kono, formerly of the Kyoto University Graduate School of Engineering, who collected samples of irradiated soil from the service areas and parking areas along the Ban’etsu Highway, a wide distribution of soil had levels greater than 40,000Bq/m2, indicating levels equivalent to radiation exposure regulated areas. (Figure courtesy of Minami Soma Association for Recommended Evacuation Zones, prepared by Yōichi Ozawa.) Further, depending on the amount of traffic and wind patterns, many have raised concerns about exposure to internal radiation through dust inhalation.
Concerning the lifting of evacuation orders based on 3), or the rationale that government officials have discussed all options with residents, in regions where evacuations have already been lifted, even though the majority of residents opposed ending the evacuations, the government has taken the position that “we will do our utmost to gain residents’ understanding” and “we will provide thorough explanations.” Even so, the government’s decision-making process has not reflected resident’s voices of opposition.
In December 2014, when the Minami Soma “Special Evacuation Encouragement Zone” was abolished, affected residents spoke out at a briefing session, registering their opposition to the re-zoning. (This type of evacuation zone was set up in June 2011 to urge residents whose homes were estimated to be in the 20 mSv/year or higher range to evacuate. Homes are added to the zone on an individual basis.) Residents registered concerns such as, “Even after topsoil decontamination, our radiation rates are higher than the mandatory evacuated zones”; “Evacuation encouragement zoning should continue until decontamination is redone; and “We oppose re-zoning until radiation rates are below 1 mSv/year.” Local administrative leaders registered their concerns with the Ministry of Economy, Trade and Industry (METI), and other residents submitted petitions addressed to the head of the Nuclear Disaster Site Task Force Headquarters with some 1210 signatures opposing the re-zoning. However, the Vice Minister of METI, Mr. Takagi, reported that he wished “to maintain fairness between Kawauchi and Date,” and that “calculated annual rates [in these regions] are below the 20mSv/year rate, and health impacts are considered to be nonexistent.” On December 28, the government therefore issued the notification that the evacuation encouragement zone would be abolished.
Residents of Minami Soma brought a court case against the government of Japan in the Tokyo District Court on April 17, 2015, demanding the (government-order] to revoke evacuation orders for  regions with rates of 20mSv/year be cancelled.
The leader of the plaintiff group, Mr. Kanno Yūichi, lamented, “Even if evacuation orders are lifted, not even one person will return home. Only the elderly reside there now. Depopulation of this region has advanced all at once.” 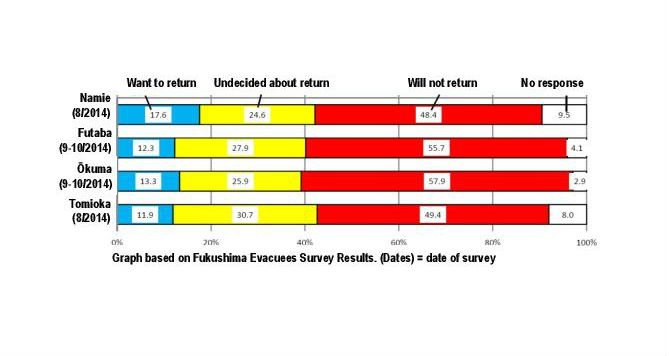 Termination of Housing Subsidies
At present, many evacuees are renting accommodation provided under the Disaster Relief Act. Under this system, local municipalities hosting evacuees provide government-funded housing through leasing blocks of private apartments. Ultimately, the majority of these funds (90% in this case) are provided by the central government, and the municipalities that the evacuee originally came from (in this case, Fukushima Prefecture) provide the remainder. Yet, Fukushima Prefecture announced plans to stop providing support for evacuees from  outside the designated evacuation areas in March 2017.
According to a Fukushima Prefecture survey, more than 59.2% of all evacuees currently use this publicly leased housing. In relation to housing demands, many respondents requested extension of the residence periods for the emergency temporary housing. (Fukushima Prefecture Evacuee Support Section “Fukushima Prefecture Evacuee Survey Results (Abstract)” (April 27, 2015)
Nevertheless, the attitude of prefectural authorities in terminating subsidies has been the focus of much criticism. For example, at a May 20, 2015 emergency gathering to demand an extension of housing subsidies, sponsored by FoE Japan, many evacuees spoke out as below.
“After having been driven out of our hometown by the nuclear accident, now they plan to cut our lifeline even as we struggle to regain our independence?” “The central government says ‘self-reliance, self-reliance,’ but knowing that we may lose our place to live, it’s impossible for us to become ‘self-reliant.’ How can you say such things, after we’ve had our livelihood base snatched away?” “You [the government] are ignoring our will and trying to force us to return home.” Many evacuees and citizen groups organized petitions and submitted these demands to Fukushima Prefecture and the Cabinet Office, which is responsible for the leased housing program. However, neither Fukushima Prefecture nor the central government reversed its decision to terminate support.
Afterwards, on August 26, Fukushima Prefecture announced “support measures” for the voluntary evacuees after the free housing program is terminated in March 2017.  For low income households, the prefecture will rank financial need and reduce housing assistance gradually, eventually terminating aid in 2019. Moreover, for those who return to Fukushima Prefecture from outside, the prefecture will provide a maximum of 100,000 yen in moving assistance, support to be extended to the end of March 2017.
Clearly, these “support measures” are designed to promote evacuees’ return to Fukushima communities. On the other hand, the “facilitating of relocation to public housing” promoted under the central government’s “new housing assistance” program, came to a halt after only 100 application documents were issued and appears to have ceased functioning. (June 2016 Interview with Reconstruction Agency).
In Conclusion
Now, persons affected by the nuclear accident are trapped in a situation of economic and psychological difficulty. Certainly, one source of the psychological anxiety is the health impacts of radiation exposure.
As of June 6 this year, the numbers of children diagnosed with thyroid cancer or with suspected thyroid abnormalities in the combined first and second cycles of screening stand at 172 persons. Within this figure, some 53 children were initially diagnosed as having no abnormality in their first screening.  Nevertheless, the central government and the prefecture continue to repeat, “It is difficult to imagine [these cancers] as resulting from the nuclear accident.”
At present, Fukushima Prefecture’s appeals to recovery, make mention of “radiation exposure effects” resulting from the Fukushima nuclear accident taboo, yielding an uncomfortable atmosphere and making it difficult to utter such claims. In this situation, even the media and journalists engage in self-censorship The government makes light of radiation exposure, and this has produced a situation where society follows suit.
First, we urge that the 20 mSv/year standard and the present policy of promoting return must be repealed.
It is critical that, with the participation of evacuees and the public, we engage in a cool-headed discussion from the perspective of the 1mSv/year radiation exposure standard. Further, decision-making about the evacuation and return policy must be carried out under the supervision of evacuees and bearing in mind the effects of radiation exposure. It is essential that, whether evacuees choose to extend evacuation or return to their home communities, economic and health-related assistance be provided.
(Kanna Mitsuta, FoE Japan)