The Japanese government has practically decided to decommission the Monju fast breeder reactor. Because the reactor has been positioned at the core of Japan’s nuclear fuel cycle, its decommissioning will mark a significant change in nuclear policy, which was adopted more than 50 years ago. 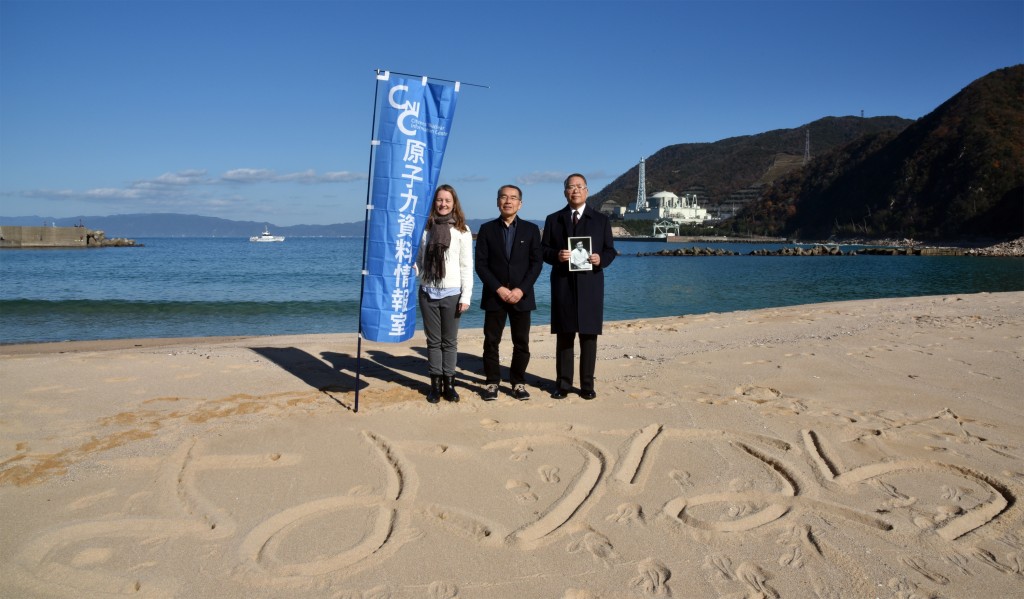 CNIC members stand in front of Monju (from right to left Baku Nishio (holding a photo of CNIC founder, Jinzaburo Takagi), Hideyuki Ban, Caitlin Stronell) In the sand is written ‘Sayonara.’ At the national rally to decommission Monju on 3 December, 2016 (Photo by Ryohei Kataoka, CNIC)

Decision by the Ministerial Committee on Nuclear Power
On September 21, 2016, the Ministerial Committee on Nuclear Power, which consists of the Chief Cabinet Secretary, Minister of Economy, Trade and Industry and other relevant cabinet members, adopted a policy entitled “Procedure for Future Fast Reactor Development.” This policy included a drastic review of Monju, including its decommissioning, but the continued promotion of the nuclear fuel cycle. Based on the adoption of this policy, the Fast Reactor Development Committee has been established under the initiative of the Minister of Economy, Trade and Industry. The new policy states that the committee is scheduled to reach a conclusion on future development before the end of 2016. However, the decision to decommission Monju will not be overturned by the committee. This is because “The committee will not discuss whether Monju should be continued or discontinued” (Toshio Kodama, President of the Japan Atomic Energy Agency). Thus the committee has been set up and will conduct deliberations on the premise that Monju will be decommissioned.
As of fiscal year 2015, national spending on Monju has reached 1.05 trillion yen since the start of its development. More than 840 billion yen is estimated to be required for the reactor to satisfy the regulatory standards, to restart operation, and to obtain results. (Of the estimation, 300 billion yen is decommissioning cost). If the restart of Monju were delayed, an additional 20 billion yen would be necessary every year. It would be too optimistic to regard the estimation as final. Delays in restarting Monju would be highly likely. The reasons include, to name a few, that the regulatory standards for a fast reactor (or fast neutron reactor) as a power-generating reactor have not been established and that it is doubtful that Monju could meet the seismic safety standards. When evaluated based on an earthquake ground motion of 760 gals, the displacement of its fuel assemblies by seismic motion was 40 mm, which is the largest acceptable displacement specified in the standards. The basic earthquake ground motion of the Mihama Nuclear Power Plant, which is four kilometers away from Monju, was reviewed and determined to be 933 gals. If evaluated based on this degree of motion, Monju would fail to satisfy the standards. It is estimated that eight years would be required for Monju to meet the standards, but it is highly unlikely ever to attain that goal.
If Monju is decommissioned now, only decommissioning costs would be necessary and other costs would be saved. The decommissioning of Monju is a very reasonable conclusion that we at Citizens’ Nuclear Information Center welcome.

Fast reactor development is headed for a dead end
The specific actions the Ministerial Committee on Nuclear Power plans to promote for the nuclear fuel cycle are to restart the experimental reactor Jōyō and to cooperate with fast reactor development in France. The fast reactor Jōyō was first started in 1977, and was operated as a non-breeding reactor after its breeding function was evaluated. Its operation has been suspended since an accident occurred in 2008. It is currently under investigation for compatibility with the new regulatory standards.
France plans to build a demonstration fast reactor named ASTRID (Advanced Sodium Technological Reactor for Industrial Demonstration). The cooperation between Japan and France began in 2014.
Pro-nuclear experts in Japan explain that the difference between a breeder reactor and a fast reactor is only whether or not the reactor has a breeding function and that if a fast reactor is developed, a breeder reactor can easily be developed. However, the French demonstration fast breeder reactor project, Superphénix, failed not because it was a breeder reactor but because the nuclear system using fast neutrons and sodium as coolant did not function well due to various problems including the volatile nature of the sodium coolant. It sounds too naive to believe that a fast reactor can be easily developed. The ASTRID project is still at the basic design stage and it has not yet been decided whether construction will go ahead or not. Koji Okamoto (Professor, Nuclear Professional School, University of Tokyo) who has been a strong advocate of nuclear energy in Japan, clearly states in an article contributed to Energy Review, a Japanese industrial monthly, that the ASTRID project is close to coming off the tracks.
The new Japanese governmental policy states that one purpose of the ASTRID development is to lower the toxicity of radioactive wastes. However, a study (called the OMEGA Project) to reduce the toxicity of radioactive wastes has been ongoing for more than 30 years in Japan, resulting in no practical achievements. Presenting a new aim does not necessarily mean that practical achievements have become more obtainable.
The construction cost of ASTRID is estimated to be 570 billion yen, of which Japan has been asked to provide 290 billion yen, according to a media report. However, the construction cost is considered likely to increase, and if Japan continues to cooperate, it is certain that the cost shouldered by Japan will increase each time construction budgets are reviewed.
Even if cooperation with the French project results in some achievements, Japan has no way of taking advantage of them. After the Fukushima Dai-ichi NPS accident, the demonstration reactor project that would follow Monju has been shelved, and has, in fact, been returned to the drawing board, with even the site for construction as yet undetermined. Under such circumstances, it is unimaginable for an area of this country to accept the construction of a fast reactor, which is far more dangerous than a light-water reactor. If a fast reactor cannot be built, the achievements of the cooperation with France cannot be used. Japan’s nuclear fuel cycle policy will, it seems, fade away in the not-too-distant future.
The policy change from a breeder reactor to a fast reactor
The reports and documents from the Ministerial Committee on Nuclear Power do not mention a breeder reactor at all; the focus of future development is not a breeder reactor but a fast reactor. This indicates that the Japanese nuclear policy, which was adopted in 1961 with the aim of developing a domestically-produced breeder reactor and which has been retained to date, is undergoing a drastic change. The change is understood to be a recognition that the technology of obtaining plutonium (through spent-fuel reprocessing) for use in a breeder reactor that is yet to be developed, is meaningless. Accordingly, it indicates that Japan’s MOX fuel program, which uses plutonium fuel in regular reactors as a tentative measure taken until the completion of a breeder reactor, will collapse, because using MOX fuel, which is ten times more costly than uranium fuel, will become totally pointless.
METI has established the Reprocessing Implementation Act (May 2016), and created an authorized corporation, named the Spent Nuclear Fuel Reprocessing Organization, to provide a framework for the continuation of reprocessing even after the liberalization of the Japanese power supply market. This means that the continuation of spent fuel reprocessing remains unchanged as government policy. However, thanks to the cancellation of the development of the breeder reactor, Japan looks set to withdraw from the nuclear fuel cycle in the near future.
(Hideyuki Ban, CNIC Co-Director)