Who’s Who: Masa Takubo ~a prophet crying in the wilderness 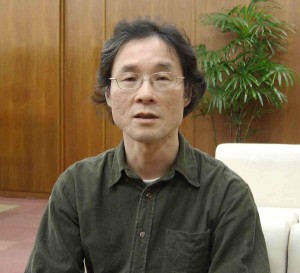 by Philip White ( international liaison officer and NIT editor for Citizens’ Nuclear Information Center from 2004-2011)
Masa Takubo is somewhat of a rarity in the Japanese anti-nuclear movement. He is a minority actor on several levels and, if you took into account all the ways in which he is a minority, he would probably be reduced to a minority of one. But that just means that his contribution is uniquely valuable.
First, he focuses equally on nuclear weapons issues and nuclear energy issues, taking a critical position on each. From my observation, Japanese critics of nuclear energy are invariably also critical of nuclear weapons, but as activists they tend to focus much more on the former. On the other hand, Japanese critics of nuclear weapons are divided on their attitudes to nuclear energy (more so before the Fukushima Daiichi nuclear accident) and, as a consequence, many have preferred to avoid the issue of nuclear energy, even if they were personally opposed to it. Masa Takubo, by contrast, is actively engaged on both nuclear energy and nuclear weapons issues. In that, despite being in the minority within the broader movement, he is in line with Gensuikin (Japan Congress against A- and H-Bombs), the organisation for which he is an official advisor.
Second, he is a pragmatist and a policy specialist. By choosing the path of the mind in a movement that tends to be led more by the heart, he often condemns himself to being like the voice of one crying in the wilderness. It is a lonely path for him, but it enables him to be an independent thinker and actor. As anyone who has tried to pressure him to conform against his will knows, he is one square peg that cannot be hammered into a round hole. But he is a voice bringing the movement’s attention to key issues that too often it neglects.
Third, he brings an international perspective. His command of English and his connections with leading experts overseas enable him to shine a light on Japanese problems in a way that no solely domestic actor could do. These attributes also enable him to provide information about Japanese nuclear issues to the outside world, including through his membership of the International Panel on Fissile Materials. As a policy wonk, his analysis is always insightful and relevant. Foreigners living in Japan are very aware of the Japanese vulnerability to ‘gaiatsu’ (outside influence), so by offering astute insights for outside expert critics, Masa is increasing the pressure on the Japanese government.
For over a decade I have observed Masa’s work. In that time I have seen him initiate numerous important campaigns, especially campaigns that crossed the boundaries of nuclear energy and nuclear weapons, such as the campaign against nuclear trade with India and campaigns focused on Japan’s nuclear fuel cycle and plutonium use policies.
One of his most significant campaigns focused on the Japanese government’s obstructionist role in regard to adoption of a ‘no first use’ (or more precisely a ‘sole purpose’) nuclear weapons policy. The timing of the campaign (beginning in 2009) was fortuitous in that it coincided with the initiation of the Japanese/Australian-led International Commission on Nuclear Non-proliferation and Disarmament (ICNND), the commencement of the US government’s Nuclear Posture Review (NPR), and the advent of a new Japanese government led by the Democratic Party of Japan (DPJ).
When Japanese nuclear abolitionists got together to consider their response to the recently established ICNND, Masa drew to their attention the importance of a ‘no first use’ (NFU) or ‘sole purpose’ posture. The Japanese nuclear abolition movement had not focused much attention on this issue. It did not gel well in the minds of some with the idealistic vision of total abolition, because it seemed to countenance the use of nuclear weapons in some circumstances.
From Masa’s pragmatic perspective, however, it was an essential first step if progress towards nuclear disarmament was to be achieved.
Meanwhile, the Japanese government had for years opposed NFU or ‘sole purpose’ because it perceived that it would weaken its protection under the US nuclear umbrella. At a time when the US government was considering such a posture in its Nuclear Posture Review, objections by Japan were being used by nuclear hawks in the US to prevent such a policy being adopted.
Although for some it was a hard pill to swallow, when it was pointed out to members of the Japanese nuclear abolition movement that Japan was actually obstructing progress on nuclear disarmament, they agreed to support NFU and to lobby the ICNND and the Japanese government accordingly.
Under the unique constellation of circumstances mentioned above, Masa’s policy analysis and direct lobbying of politicians produced remarkable results. He played a major role in getting over 200 members of the Japanese Diet to sign a letter to President Obama expressing, among other things, their ‘desire that the United States immediately adopt a declaratory policy stating that the “sole purpose” of U.S. nuclear weapons is to deter others from using such weapons against the United States or U.S. allies’. This, along with a letter written by Foreign Minister Okada to Secretary of State Clinton and Secretary of Defense Gates, significantly reduced the force of the arguments of those who claimed that Japan opposed adoption of a ‘sole purpose’ policy. It is a tragedy that after the demise of the DPJ-led government, the old guard reasserted control and, during the most recent NPR process, Japan was again accused of obstructionist tactics. Nevertheless, the letter from the Diet members and the comments of former Foreign Minister Okada are still relevant.
Apart from direct campaigning, Masa has his own website through which he provides detailed background and analysis of nuclear issues relevant to Japan. The Kakujoho site includes a comprehensive Japanese site (kakujoho.net) and a trimmed down English site (kakujoho.net/e/index.html).