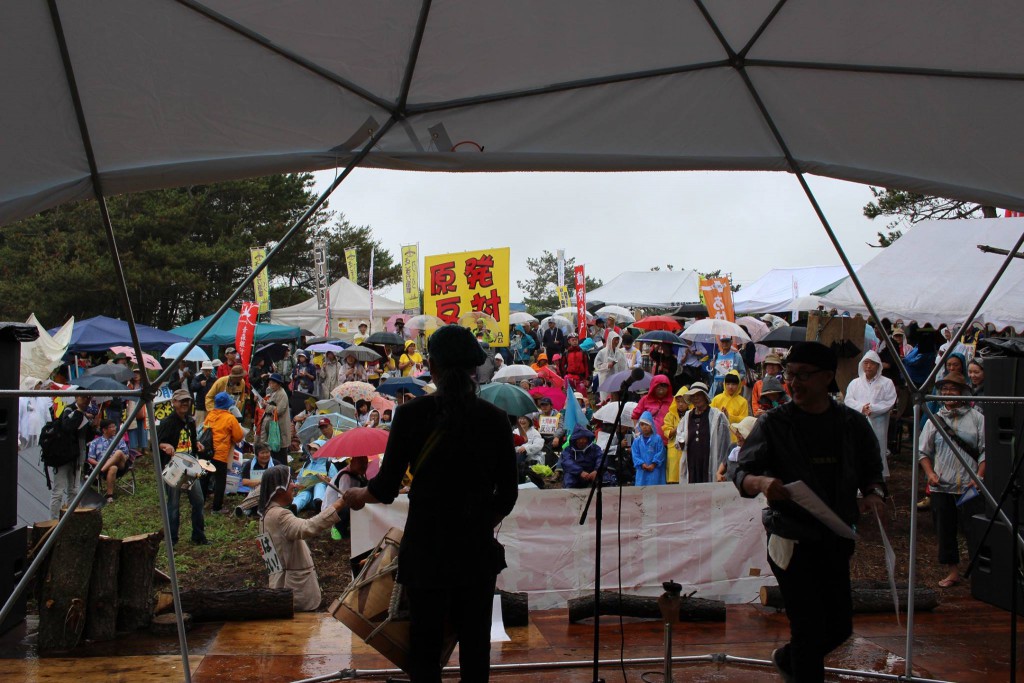 Time flies so fast. We are celebrating the 10th anniversary of our live music event OhMAGROCK this summer. I became involved in the action to oppose the Ohma Nuclear Power Plant construction project, Ohma Town, Aomori Prefecture, in 2002. I met Asako Kumagai that year and had a serious talk with her. She owned a one-hectare lot near the center of the site where the NPP was planned, and had been rejecting offers to sell out. I heard of many nasty schemes perpetrated under the name of national policy. The schemes were as filthy as those used by gangsters, breaking down the ties between local people, and even families. Ms. Kumagai was holding out alone with a dignified attitude. My heart was shaken by her. In May 2008, the national government approved the start of the construction of the Ohma NPP. Unfortunately, Ms. Kumagai had already passed away, but Ms. Kumagai’s lot survived, along with a cottage named Asako House, in the premises of the planned Ohma NPP. In the same year, an anti-NPP event, a combination of a citizens’ rally and a live music event, was held on the lot. This was the origin of today’s OhMAGROCK. In the first and second years, about 90 minutes of live music was performed before the rally. In the third year, this became a two-day event, music being performed for the whole of the first day as well as on the second day, when  the rally was held. The Great East Japan Earthquake and the Fukushima Daiichi NPP disaster occurred on March 11, 2011. Affected by this calamity, we were not sure whether we could organize the fourth annual live event, but it did go ahead and attracted more performers and participants than before, and even media reporters. In the inclement weather, as if caused by an angry heaven, a safe and exciting live event was successfully staged. It was from the fourth event that we started to use the name OhMAGROCK. In addition, from the fourth event, we started to use a different lot, owned jointly by many anti-NPP people, located adjacent to the Ohma NPP premises, because conditions surrounding Asako House had changed. Ever since then, the number of people participating in both OhMAGROCK and the citizens’ rally has been increasing year by year: They arrive in Ohma Town on the day before the rally, enjoy the music during the day, and participate in the now-routine pre-rally evening lecture session before the rally on the next day. On the day of the rally, music is performed first, then the rally and a demonstration march are held. After the march, the latter half of the day’s music program is held. Thus OhMAGROCK has become a full two-day event. This has helped to bring the OhMAGROCK audience and anti-NPP citizens participating in the rally closer together. While the purpose of the whole event is to express our opposition to nuclear power, the event has a wonderfully friendly atmosphere. The march is led by a band, and resembles a town parade. The response of the locals is changing from that of earlier days. Recently, some wave their hands and talk to us. This year, we hope to make the 10th OhMAGROCK a more friendly, relaxing event that everyone can enjoy. Your donation to the organization of another successful OhMAGROCK will be very much appreciated. Please see our website for details:
ohmagrock.greenwebs.net/?page_id=660
We look forward to seeing everyone there!
text by YAM (Masakazu Yamauchi ) OhMAGROCK organiser
The name ‘OhMAGROCK’ combines the town of Ohma and its famous  tuna fish (‘maguro’ in Japanese) with the rock festival event that takes place