Takahama Unit 4 Reactor Restarted
Kansai Electric Power Co.’s (KEPCO’s) Takahama Unit 4 reactor (PWR, 870 MW) was restarted on May 17. It began power transmission on the 22nd and full operation on the 25th. Following up, KEPCO aims to restart Unit 3 (also PWR, 870 MW) in early June.
Together with Kyushu Electric Power Co.’s Sendai Units 1 and 2 (both PWR, 890 MW) and Shikoku Electric Power Co.’s Ikata Unit 3 (PWR, 890 MW), which have previously resumed operation, this will make five nuclear reactors that have been restarted in Japan. All of them are pressurized water reactors (PWR). Not one boiling water reactor (BWR) has yet been restarted.
Fukui Buddhist Priest Goes on Hunger Strike
As a protest against the restart of Takahama NPP, the priest at Myoutsuji Temple in Obama City, Fukui, Tetsuen Nakajima, went on hunger strike. Myoutsuji Temple was built in the Kamakura Period and its main building and a 22 meter high three-story pagoda have been designated as national treasures. The hunger strike was conducted on May 15-17 outside the KEPCO head office in Osaka and continued on May 18-19 in the lobby of the Fukui Prefectural government office. Only drinking water Nakajima commented: “I put my trust and hope in the multiple and unspecified public which is opposed to the restart of  nuclear reactors.” 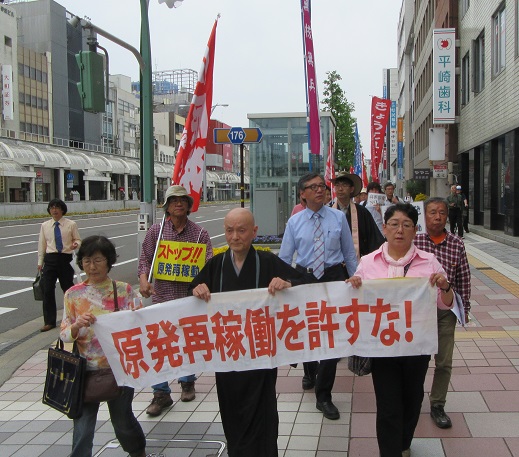