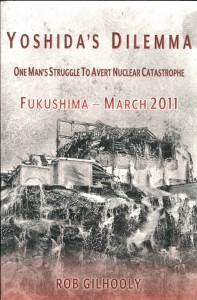 Rob Gilhooly first came to Japan from the UK in 1990, living and working for his first few years in Fukushima as a teacher on the JET Program. He was one of the first foreign journalists on the scene after the Great East Japan Earthquake, arriving in Iwaki, 20 miles from Fukushima Daiichi, on March 12th. His first-hand experience of Japan and especially of those first few days of unfolding nuclear catastrophe, most definitely helped him, indeed spurred him to write this book. Although he is a journalist and the style of the book is certainly journalistic, reconstructed conversations between plant workers as well as TEPCO executives and government ministers, are interspersed with quite detailed technical information. This effectively conveys the utter darkness– literal, technical and psychological– that the workers, political leaders and indeed the whole country, were stumbling around in. This book is another stark reminder that no one who was supposed to be responsible for operating Fukushima Daiichi or for the safety of citizens, had a clue what was happening as the situation became more and more dire. It shows graphically, how most of the attempts to ‘avert nuclear catastrophe’ were pathetically ineffective and the ‘worst-case scenario’ where Tokyo would have to be evacuated and Japan would cease to function as a nation-state, was avoided more through luck than any clear management.

Amidst this total chaos, the Fukushima Daiichi superintendent Masao Yoshida certainly comes out as a hero of sorts– defying the orders of the TEPCO bosses in Tokyo, fighting against all odds to protect his men and country. Yet, despite the title ‘one man’s struggle to avert nuclear catastrophe,’ this book is really about many men and their struggles, from Fuku-Ichi managers and workers to national politicians, from US experts dispatched to Japan as advisers to local Fukushima citizens, from Hazardous Materials and Hyper Rescue Squad team members of the Tokyo Fire Department to Self Defense Force personnel. The book makes a clear division between the ‘baddies’ in the TEPCO executive and parts of the government, especially the Nuclear and Industrial Safety Agency (NISA) who appear to be not only ignorant but also oblivious to the situation that was spiraling out of control, interested more in self-preservation than anything else; and the ‘goodies’ who were there at ground zero, sacrificing themselves to save their families, their communities and their country. While there is no doubt that the people on the frontlines of battling multiple, out-of-control nuclear reactors must indeed be considered heroes at one level, we must not lose sight of the fact that Yoshida, at least, was also very much a part of the regime that was responsible for perpetrating the nuclear safety myth and the benefits of nuclear energy. This is of course a controversial issue and while this book does not perhaps fall into excessive hero-worship, there could well be readers who take away simply the heroic aspects without questioning what these heroes had done in the years prior to 3.11 to create the disaster in the first place.

Gilhooly also briefly mentions the protest movements against nuclear power which have appeared after 3.11. He is somewhat negative about the strength and impact of anti-nuclear movements in the face of the political system. For example, initiatives to encourage the expansion of renewable energy in Japan, such as the Feed-In-Tariff, are being whittled down. Despite this, one does detect an element of sympathy with the anti-nukers. After writing such a detailed account of such a blundering tragedy, it would perhaps be difficult to be anything else.