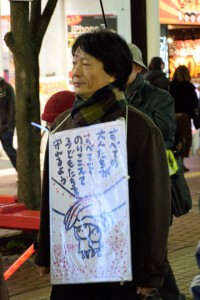 Mr. Tatara’s placard says: ‘So that all adults can overcome everything and protect the children’

Life in pursuit of safety and coexistence

Seven years has passed since the accident at the Fukushima Daiichi Nuclear Power Station. The accident emitted a huge amount of radioactive substances, which placed many people in severe jeopardy. Organic farmers who had been committed to improving soil to deliver safe and delicious food to consumers were among them. The fertile land they had cultivated with meticulous care was contaminated with radioactivity to a significant degree. Satoshi Tatara and his colleagues, who had been committed to delivering safe, delicious organic food to customers, were also placed in an agonizing situation. Mr. Tatara was an executive director of i Coop Miyagi Japan, which is a non-store delivery-only co-op of 10,000 members at that time. Many members requested the co-op to purchase food from the western regions of Japan, where there was no radioactive contamination. However, the motto of the co-op was: “Local Produce for Local Consumption.” Purchasing food from western regions would contradict the co-op motto. Mr. Tatara and his colleagues established their own radioactive limits that were stricter than the national standards, and decided to continue to purchase and deliver local food. As a result, the co-op gained the trust of both farmers and consumers.
Mr. Tatara entered the Faculty of Science, Tohoku University in 1977. Three years after he entered university, he established the Ecology Research Group, emphasizing the philosophy of “coexistence with nature.” They plowed vacant land patches on the university premises and started using them as fields. In addition, he started to support a court case filed by the people living near the Onagawa Nuclear Power Plant construction site to stop the construction. This was about 35 years ago. Ever since, he has been committed to creating a society free from nuclear power. It was about this time when Mr. Tatara and I, 11 years older, had our first encounter. At that time, I was working as the secretary of the group supporting the court case.
After trying his hand at different activities, Mr. Tatara left the university before graduation and joined i Coop Miyagi Japan. He became increasingly enthusiastic about delivering safe and reassuring products to customers while establishing face-to-face relationship with local producers. Then the Fukushima Daiichi NPS accident occurred.
Miyagi Prefecture, where we live, is situated immediately north of Fukushima Prefecture, and hosts the Onagawa Nuclear Power Plant. The Onagawa Plant was also damaged by the Great East Japan Earthquake and tsunami, but unlike Fukushima Daiichi NPS did not suffer a severe accident. Currently, the move aiming to restart Onagawa NPP is becoming increasingly strong. In Japan, the person who has the final authority to approve the restart of a nuclear power plant is the governor of the prefecture that hosts the plant. Mr. Tatara, who has pursued a society independent of nuclear power, with strong determination ran for governor of Miyagi Prefecture last year. The rival candidate was the incumbent governor, strong because he was the incumbent, and Mr. Tatara’s bid for the governorship was unsuccessful. However, his pledge to hold a prefectural referendum on the restart of the Onagawa NPP to allow residents to make a direct decision was supported by many people.
According to newspaper surveys, 70% of the residents in the prefecture are against restart of the NPP. Currently the move aiming to restart Onagawa NPP is gaining strength. To make the population’s intention visible, preparations have started to submit a direct demand for the referendum, an action specified in the Local Autonomy Act. Mr. Tatara will act as the representative of the movement.
I have worked with Mr. Tatara for 35 years to realize a society free from nuclear power. While it is sometimes difficult to decide which way to steer to realize our aim, Mr. Tatara is a reliable colleague. As the Japanese saying goes, when he hears one thing, he understands ten things and puts them into practice. I admire Mr. Tatara for his excellent insightfulness and his powers of understanding.
<Hironori Shinohara (Sendai Nuclear Problem Research Group)>