Blowout Panels Useless in an Accident – Basic design fault of the Tokai No.2 NPP

Tokai No. 2 Nuclear Power Plant (NPP) is a Boiling Water Reactor (BWR), the same as the reactors which melted down at Fukushima Daiichi NPS. Its containment vessel is also Mark II type. Tokai No. 2 also sustained damage due to the 3.11 earthquake and tsunami, but avoided meltdown. It has been about 40 years since it began operations and it is one of the aging NPPs. 960,000 people live within a 30km radius and it is only 110km from Tokyo. Preparations are underway to restart it, but many people are opposed to a restart, claiming the risks are too high. (See CNIC Statement  for details)
What is a “blowout panel”?
The Japan Atomic Power Company (JAPC) has implemented design changes, additions and tests regarding the screening of the Tokai No.2 reactor building blowout panels.
The blowout panel is a device that prevents destruction of the reactor building by automatically releasing pressure from the building when pressure rises inside it. Problems were pointed out after hydrogen explosions occurred in reactor buildings during the Fukushima accident. In November 2017, the condition that “it must be possible to shut the blowout panel after it has opened” was added to the safety regulations. Tokai No.2 developed a blowout panel closure device and performed vibration tests to verify its function (opening-closing, airtightness) after an earthquake.
Technical problems were pointed out after the tests, and the principle issue is that the blowout panel is related to the structure of the reactor building itself and the design of several systems within it. This article takes an overall look at this issue, and having looked at the design conditions, considers their validity and the setting of severe accident conditions, and examines the blowout panel design standards and operation in detail. 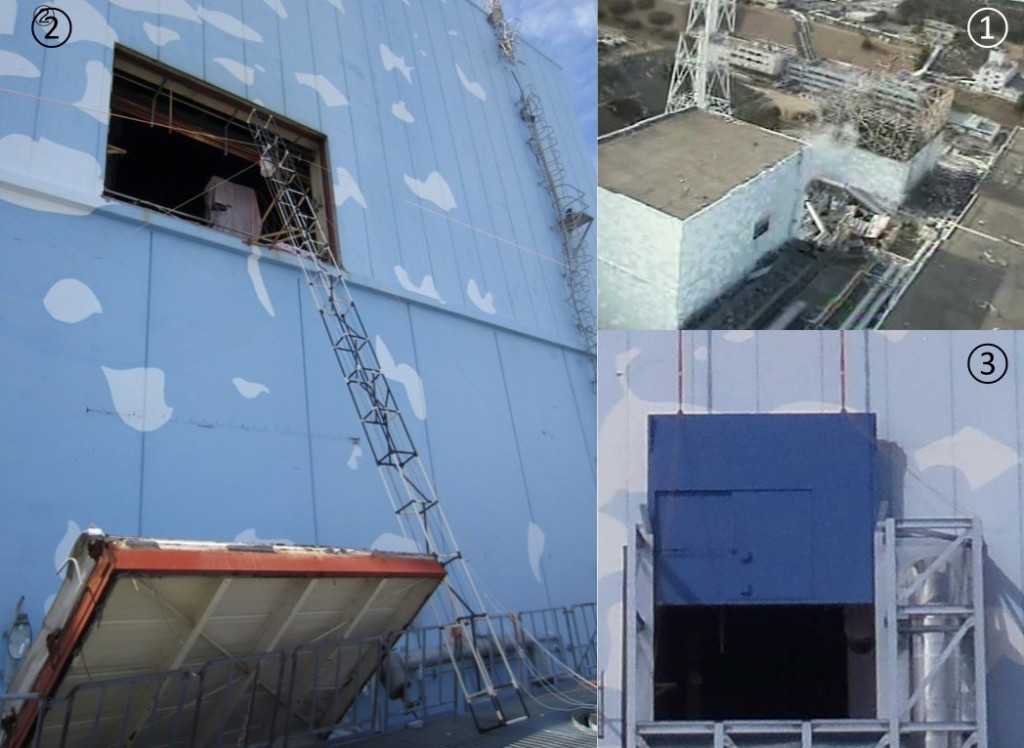 (1) Aerial photo of Unit 2 of Fukushima Daiichi NPS. Steam is coming out of the hole in the wall left by the fallen blowout panel. In the background is Unit 1 (taken on 10 April 2011)
(2) Fallen blowout panel and the open hole (taken on 29 August 2011)
(3) One example of a sliding door (taken on 11 March 2013)
Photos courtesy of TEPCO
Containment vessels are weak against external pressure
Containment vessels collapse at an external pressure 1/20 of the internal pressure
The boiling water reactor (BWR) containment vessel is known as the Primary Containment Vessel (PCV), which is intended to confine radioactive materials during an accident. If, for instance, a pipe ruptures inside the PCV in a loss-of-coolant accident, the PCV swells like a balloon to maintain its strength under the internal pressure.
In the case of the Mark II PCV pressure boundary at Tokai No.2, the design pressure is 310 kPa(G) (kilopascals at a gauge [G] reading that sets atmospheric pressure at zero), or roughly 3.1 atm (atmospheres) (G). With a diameter of about 26m and a steel plate thickness of 20-30mm, the PCV is a welded structure having a diameter/plate thickness ratio of nearly 1000. The design pressure of 3.1 atm means that the PCV will withstand twice that pressure (around 6.2 atm) in a severe accident. When external pressure exceeds internal pressure, however, the design pressure of the PCV shell is much lower, collapsing at a pressure differential of around 0.14 atm (2 psi [lb/sq. inch] or roughly 13.7 kPa), rather like an aluminum beer can. This is known as external pressure buckling, and since it can occur at 1/20 or less of the internal design pressure it is necessary to maintain external pressure on the PCV at a low value – the allowable pressure being half or less than the external pressure buckling strength of the PCV, or 1 psi (6.9 kPa).
Secondary containment – the reactor building and the blowout panels
The reactor building, the secondary containment, is constructed to surround the PCV, the fuel exchange floor (top floor) and the spent fuel pool (SFP). It is a steel-reinforced concrete structure (Fig.1). 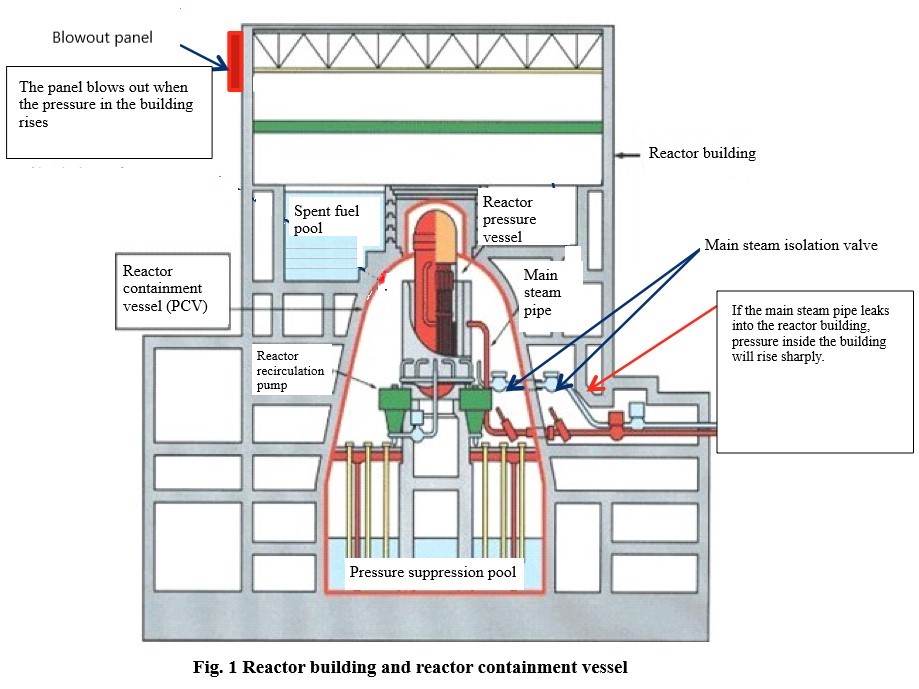