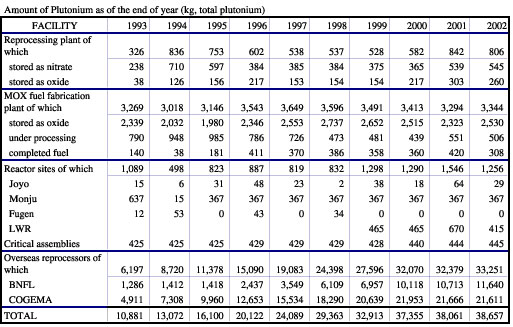 Plutonium stock data of 2002 was officially released on September 2. According to the data, 5.4 tons of plutonium is currently stored within the country and 33.3 tons outside of the country; in total, Japan owns 38.7 tons of plutonium. Although no value is shown regarding the amount of plutonium contained in spent fuels in the table, it has reached 97 tons.

Since MOX fuel–which had been due to return to the U.K. because of the falsification of its quality data–was shipped back to the U.K. from Takahama port, the total of 255kg was taken from the domestic stock (See the difference between 2001 and 2002 in “LWR Commercial” within “reactor sites of which”).

In addition, about 340kg of plutonium was recovered from the reprocessing at the U.K. Given the fact that a reprocessing contract with France has expired, reduction in France’s plutonium stock can be explained as “nuclear loss” (loss caused by a decay of plutonium isotope, Pu-241, into americium ). This phenomenon can occur both in Japan’s domestic plutonium stock, as well as in over sea’s stock such as the one in the U.K. The amount of nuclear material missing from plutonium was not disclosed.