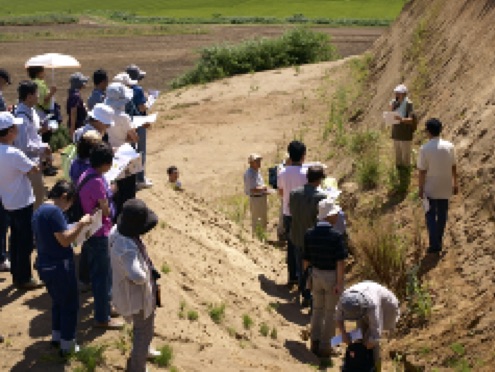 HACASE members conduct research on the outcrops in the Iwanai Plain, Hokkaido

The Hokkaido Active Citizen’s Association of Science (HACASE) was established in November 2015.  At present there are about 25 members. The purpose of this group is, firstly, to investigate, research and discuss various kinds of problems in our society by making the most of its members’ accumulated experiences and expertise. Secondly, the group aims to inform the public about the current situation of citizen science that is done by and for the citizens through their activities, and thirdly, the group will fulfill their social responsibility as citizen scientists (according to the association’s rules).

The Nuclear Regulation Authority (NRA) began the Review Meeting on Conformity to the New Regulatory Requirements for Hokkaido Electric Power Company’s (HEPCO) Tomari Nuclear Power Station (NPS) in July 2013. The documents presented by HEPCO at meetings have been made public on the NRA website. While we, the group members, were checking the review meeting documents, we found that many problems had been left unresolved, including those concerning the active faults that run near Tomari NPS, and the potential risk of earthquakes, tsunamis, and volcanic eruptions in the area.

Despite this situation, NRA began to accept provisionally HEPCO’s claims in 2015, although the panel had yet to make full investigations into such risks and had not reached any conclusions on those issues.

We thought this was a very serious situation that should not be overlooked and felt the need to do something about it. This was the main reason why we decided to set up HACASE.  Another reason was that two questions were raised among us. One of them was why the NRA members failed to correctly perceive that HEPCO’s claims and its logic were scientifically unreasonable. The other question was how far NRA, with its limited number of scientific experts, was capable of making a thorough check of HEPCO’s data. 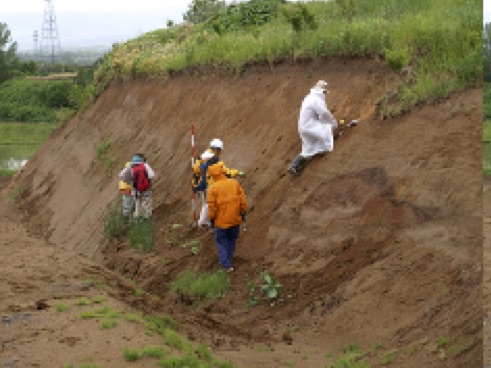 HACASE members conduct research on the outcrops in the Iwanai Plain, Hokkaido

HACASE has conducted its activities in two areas. One of them concerns compatibility of Tomari NPS with the new NRA regulations. We studied scientifically and from a critical viewpoint a huge number of documents presented by HEPCO, and disclosed problems and questionable points in the data.  Besides this, we independently conducted thorough investigation and research on the outcrops in the Iwanai Plain and its surrounding areas, and revealed mistakes and incorrect claims in the documents. In addition, we presented to the public our claims and interpretations in order to provide them with an opportunity to compare HEPCO’s position with ours.

The other area we have covered is geological disposal of high-level radioactive waste. In the “Public Comment” on this issue, we sent NRA our opinion that Japan does not have any geological strata where nuclear wastes can be stored safely. We asserted that Japan has no bedrocks that would remain stable for a long time, and that Japan has many volcanoes and earthquakes, as well as numerous subterranean water veins. In addition, we conducted scientific research on several locations that are likely to be selected as candidate sites for the geological disposal site, such as Horonobe, Kushiro, and Suttsu, before expressing our opinions.

HACASE conveyed the results of our studies and research to NRA, part of which were reflected in the discussions at NRA’s Conformity Review Meetings. We also attempted to convey our opinions to the public by, for example, holding press conferences and lecture meetings, publishing related pamphlets, making presentations at academic conferences, and sending our paper to an academic journal and reports to various magazines. We also organized geological excursions by bus in the vicinity of Tomari NPS and Iwanai Plain. Many citizens’ groups and researchers cooperated with our activities and part of our investigation and research costs were financed by the Takagi Fund during the three-year period from 2016 through 2018.

<The Takagi Fund was established in 2001 in accordance with the last will and testament of Takagi Jinzaburo (1938-2000) (also one of the founders of CNIC), who devoted his life to realizing a nuclear-free society, democratic public decision-making, and the advocacy of “Citizen Science.”>