The water temperature in the containment vessels and the spent fuel pools (SFPs) varies mostly around less than 35oC and no great changes have been seen. The state of releases of Xenon-135 (half-life roughly nine hours), released when uranium fuel undergoes fission is also unchanged and it can therefore be estimated that the state of the reactors is stable. Further, according to an assessment by TEPCO in November 2020, around 24,000 becquerels per hour (Bq/h) of radioactive materials were being released to the air from the buildings (Fig.1).

At the same time, decay heat has fallen greatly with the passage of time, and thus the volume of cooling water injected into the reactors has been reduced (falling from 7-10m3 per hour in May 2011 to 1.3-1.5m3 per hour in December 2020).

The state of removal of spent nuclear fuel from the SFPs is summarized in Table 1. Spent nuclear fuel removal from Unit 4 has been completed. While multiple problems have been experienced with the equipment (fuel handling equipment crane and fuel-handling machine) for removal of spent fuel from Unit 3, removal began on April 15, 2019. (It was originally set to begin around mid-FY2018.) Delays have occurred in the work, which is now ongoing on a 24-hour basis with a view to completion of the spent fuel removal by the end of fiscal year 2020 (i.e. March 2021). 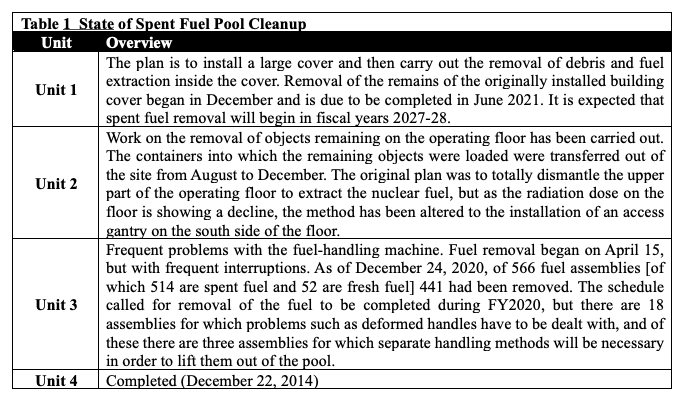 In a Nuclear Regulation Authority (NRA) review meeting related to analysis of the accident at TEPCO’s Fukushima Daiichi Nuclear Power Station (FDNPS) in June 2020, extremely high dose rates were reported in the vicinity of the shield plugs, the upper lids of the nuclear reactor containment vessels, of Units 2 and 3. Regarding this issue, the draft interim summary, reported at the December review meeting, estimated that of the total of cesium-137 in Units 1-3, 71 × 1016 Bq, 1.5 × 1016 Bq had been released to the atmosphere, 43 × 1016 Bq had transferred to contaminated water, and of the remaining 26.5 × 1016 Bq, that affixed to the lower surface of the shield plug was 100-200 × 1012 (trillion) Bq in Unit 1, 4-7 × 1016 Bq in Unit 2 and 3 × 1016 Bq in Unit 3. The reason for the amount of affixed cesium-137 being small in Unit 1 was thought to be that the substance had leaked out onto the operating floor, the fifth floor of the building, due to deformation of the shield plug. The dose rate is extremely high and will have a great impact on the forthcoming decommissioning work. 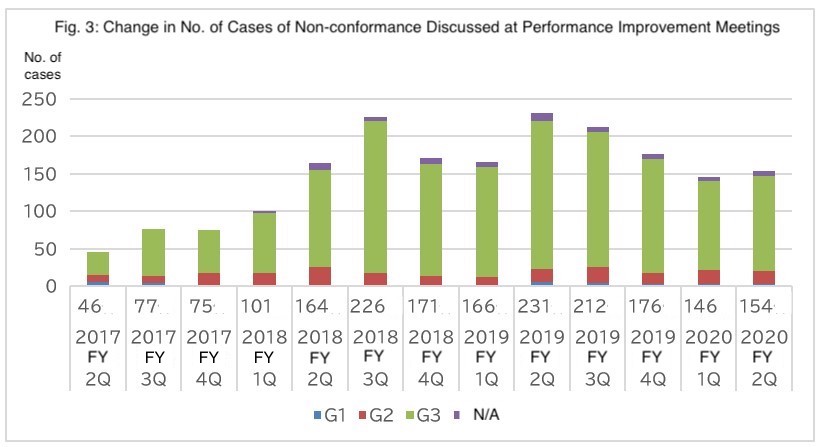 Regarding the reduction of the toxicity of contaminated water, after removal of cesium and strontium and removal of impurities using reverse osmosis (RO), radionuclides other than tritium are removed by the multi-radionuclide removal equipment (ALPS – Advanced Liquid Processing System) and then stored in tanks (containing 1,216,512m3 as of December 17. However, due to past equipment malfunctions and operational policies, in many cases radionuclides other than tritium are present, resulting in only around 27% of the stored water being below the notification concentration). Besides this, water remaining in buildings is roughly 12,190m3, strontium-treated water, etc. is 23,725m3, water treated by RO is 8,310m3, concentrated brine is 300m3, concentrated wastewater is 9,311m3, etc.

The target for the mid-term roadmap was that water remaining in buildings, except for a) reactor buildings of Units 1-3, into which cooling water is being injected and circulated, b) the main processing building, in which there are high dose rate zeolite sandbags, and c) the high-temperature incinerator building, would be processed by the end of 2020. This target was attained on December 24. At the same time, exposure of the floor surfaces was achieved, but it proved impossible to confirm the locations from which groundwater was flowing into the buildings. In other words, it is strongly suggested that groundwater is flowing into the buildings where contaminated water exists.

Concerning contaminated water following ALPS treatment, the government is continuing to take the stance of ocean release. On November 27, the Minister of Economy, Trade and Industry, Hiroshi Kajiyama, stated, “We cannot postpone a decision on the policy forever,” while also mentioning that “It is imperative to consider the necessity of constructing tanks in light of the disposal method.” Further, on December 11, TEPCO completed the installation of the final group of tanks. TEPCO has no further land on which to increase the number of tanks and says that the tanks will be full by summer 2022. However, on December 18, the Kahoku Newspaper reported that, as a result of a careful investigation of TEPCO materials, there was sufficient land to increase the installation of tanks to store 56,700 tons of treated water, roughly the amount treated in one year.