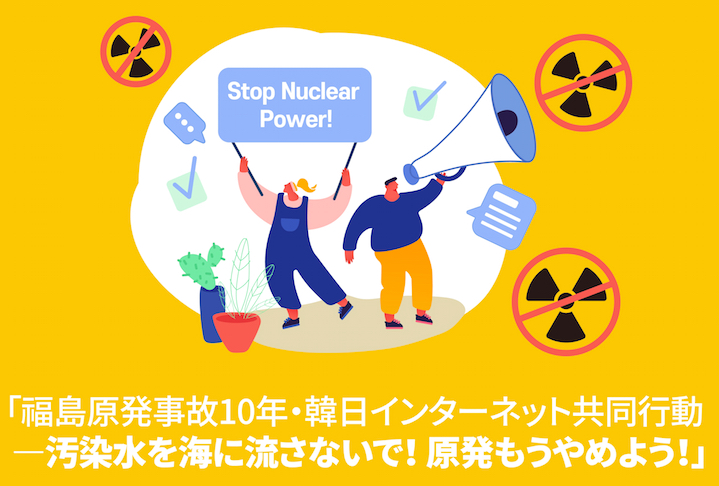 Ten years have passed since the severe accident at the Fukushima Dai-ichi Nuclear Power Station (FDNPS). To mark this occasion, South Korean anti-nuclear organizations called on their Japanese counterparts to jointly launch anti-nuclear campaigns using the Internet. The main purpose of the joint action is to share the perception on the current situation of nuclear power generation and to launch a joint action for a nuclear power phase-out. The South Korean proponent organizations include Energy Justice Action, Korean Federation for Environmental Movements (KFEM), and 44 others. On the Japanese side, Sato Daisuke from No Nukes Asia Forum Japan, Mitsuta Kanna from FoE Japan, Muto Ruiko and Kawai Yasuro from Citizens’ Commission on Nuclear Energy came forward as the campaign promoters.

The first joint event was held on January 20, 2011, at which it was decided that the participating organizations would discuss various kinds of plans and actions during the following 50 days. Muto Ruiko reported on the still unsettled Fukushima disaster and reconstruction of devastated areas which is being carried out without any consideration for the well-being of local residents. The participants then agreed to initiate an international signature-collecting campaign named “Ten years after the Fukushima nuclear disaster: No discharge of radioactive contaminated water into the ocean! No more nuclear power generation!”

This campaign is promoted by change.org, an American petition website, and the collected signatures are being translated into 10 languages. At this stage, 41,365 people from 69 countries have joined this campaign. Before closing the first event, the Japanese and South Korean organizations adopted a joint statement that they would protest against the discharge of radioactive water into the ocean from FDNPS, and would strive to expand joint action in an attempt to achieve a nuclear-free society as promptly as possible.

In the second joint action event held on February 9, 2021, the participating organizations reported on the current situation of the anti-nuclear power movements in Japan and South Korea, as well as urgent issues that should be tackled immediately. This writer reported on legal battles and other types of struggles against re-activation of nuclear power plants in Japan, and the current situation with regard to the nuclear fuel cycle. Mitsuta Kanna reported on the issue of the release of contaminated water into the ocean, while Goto Masashi explained about the on-going clean-up operation after the Fukushima nuclear accident. In his speech, Goto referred to the Hanbit Nuclear Power Plant in Jeollanam-do province in South Korea where a large hollow of nearly 1.6 meters in width was discovered in the wall of the reactor containment vessel. This hollow was allegedly created by sloppy, corner-cutting construction work, and the plant has become a target of popular criticism in the country.

Although not directly discussed in the meeting, in South Korea, when the government invites members of NGOs to its official committee, it limits the number members but allows the organization to choose their own representatives, which is quite different from the Japanese system. The current South Korean government seems to acknowledge the importance of citizens’ movements, probably because there were periods of dictatorial rule in the past in the country.

Lee Sang hong (Kyeongju Federation of Environmental Movements) reported on the tritium-related problem involving the Wolseong Nuclear Power Plant (NPP) in North Gyeongsang Province. The plant has four nuclear reactors. The Moon Jae-in government called for a shutdown of Unit 1, South Korea’s second-oldest reactor, earlier than planned. The Nuclear Safety and Security Commission (NSSC) approved, the permanent shutdown of the reactor on December 24, 2019. The plant’s operator Korea Hydro & Nuclear Power (KHNP), however, was alleged to have deliberately reduced the economic feasibility of Wolseong Unit 1, and the Board of Audit and Inspection began investigating the allegation in October 2020.

Wolseong Unit 1 is a 679MWe Canadian-type reactor that releases a great amount of tritium. This means that the nuclear plant is causing the problem of discharging into the ocean contaminated water that contains mainly tritium, the same problem as that of FDNPS. This is the reason for the demand to shut down Wolseong Unit 1.

The third speaker from South Korea was Hong Deok hwa (Professor of social science at Chungbuk National University), who talked about the revision of South Korea’s legal system necessary for expediting the country’s departure from nuclear power generation. He pointed out two necessary revisions, to include the “phaseout of nuclear power generation” in the government’s current carbon-neutral policy, and to strengthen local residents’ decision-making powers for the purpose of reinforcing citizens’ anti-nuclear movements.

He went on to say that the citizens’ social movement has made the most of the conventional system of a small number of experts and activists participating in the government’s committees or in the formulation of its basic plans. The experts and activists represented their citizens’ groups or local communities and expressed their opinions on such occasions. He added, however, that although it was undeniable that the citizens’ social movement has made some achievements in doing this, it is doubtful that this system has contributed to an enhancement of the capabilities and power of the local communities and citizens’ organizations. This writer felt that this remark also applied to the situation in Japan.