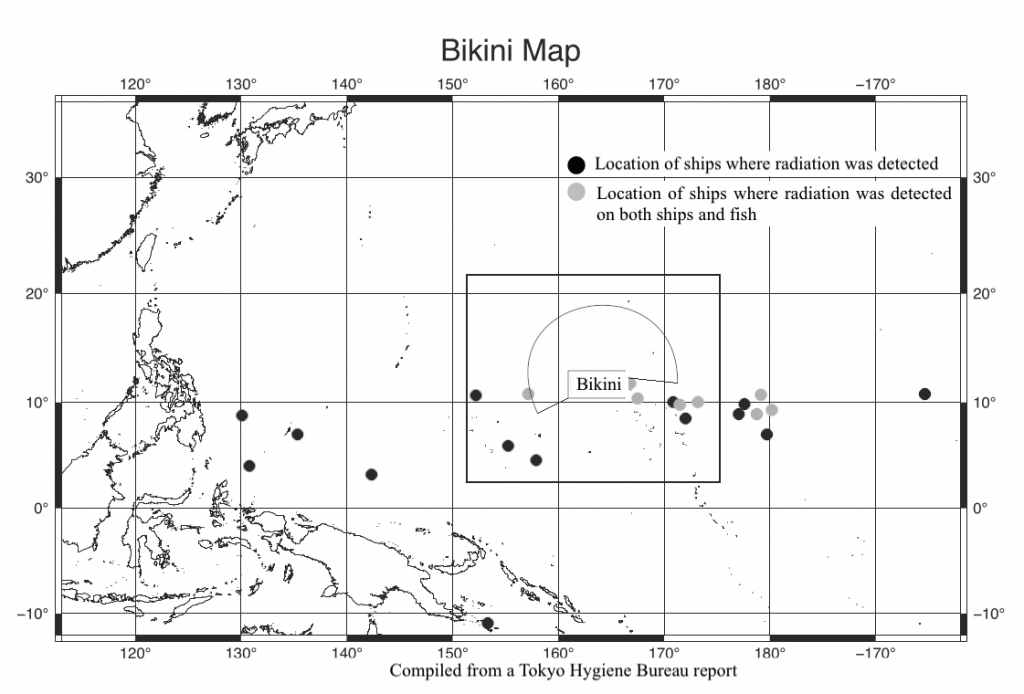 In 1954, the USA conducted six thermonuclear tests (commonly known as the “Operation Castle,” referred to below as “the H-bomb tests”) over the Bikini Atoll and other sites in the Marshall Islands. It is well known that the crew of the Daigo Fukuryu Maru fishing boat were exposed to nuclear fallout as a result. In fact, however, all-in-all, about 1,000 other fishing boats and cargo vessels with somewhere between 10 and 20 thousand crew members were exposed.

On January 4, 1955, the Japanese government exchanged official notes with the US government over compensation, arriving at political settlement between them for 2 million dollars in compensation from the latter in exchange for Japan not seeking to hold the US legally liable.

After that, the Japanese government discontinued any further investigation into the incident and gave nothing more than a paltry sum in compensation to the owners of the exposed fishing boats (*but not the crews) to cover losses they had incurred such as having to dispose of contaminated tuna. No remedial action was taken with regard to health damage suffered by the crews of the exposed vessels. The fact that a total of about 1,000 vessels with crew members numbering between 10 and 20 thousand had been exposed to radioactive fallout was buried and forgotten, trivialized in the public mind to an incident involving the hapless Daigo Fukuryu Maru only.

It wasn’t until September 19, 2014 that the Ministry of Health, Labour and Welfare finally released official documents relating to the Bikini incident, followed by a subsequent set later that year in October. With that, the full story behind the Bikini incident that had been relegated to oblivion came to light.

In response to this, crew members exposed by the H-bomb tests and surviving family members of others came together as plaintiffs in May 2016 and filed a claim on national compensation, calling for the government to account for not having released the information on the Bikini incident until then or having taken any legal remedial actions. However, in neither the first trial nor the intermediate appeal was the government’s liability recognized, and the plaintiffs gave up.

In 2016, a group of 11 people, including some of the plaintiffs in the above-mentioned state compensation suit and other crew members who had been exposed during the H-bomb tests came together as applicants and applied to the Japan Health Insurance Association (JHIA), which oversees Shipmen’s Social Insurance (SSI), for medical treatment benefits, survivor pensions or lump-sum benefits to bereaved families under their SSI policies over having fallen ill as a result of their exposure during the H-bomb tests and the resulting deaths or then ongoing treatment (i.e., they filed for workmen’s accident compensation under SSI).

JHIA, however, would not even conduct hearings with the exposed crew members, despite their being extremely important living witnesses. They dealt with the matter by not even acknowledging any of the applications (hereafter, “the Rejection”).

The main reason for the Rejection was that they did not recognize a causal relationship between the exposures and the illnesses. In other words, they said, “We could not confirm results showing that there had been sufficient exposure for the health effects from radiation to manifest.”

In response to the Rejection, the applicants made requests for examination and for reexamination, but there was no change in the conclusion.

Subsequently, 12 applicants (four of whom had been exposed crew members), all residing in Kochi Prefecture, called together a counsel consisting at that time of seven lawyers belonging to Kochi Bar Association. Under their direction on March 30, 2020, they filed a suit in the Kochi District Court seeking withdrawal of the Rejection (i.e., authorization for workmen’s accident compensation) with JHIA as the defendant.

A merger of cases later added two surviving family members of exposed crew members (both also residing in Kochi Prefecture) to the plaintiffs. Now numbering 14, they filed a suit seeking compensation for their losses on the basis of Article 29 Paragraph 3 of Japan’s Constitution, with the national government as the defendant, saying that the crew members exposed to radiation during the H-bomb tests had had the right to seek compensation for damages from the USA with regard to harm suffered as a result of the exposure in question, but they lost the ability to exercise that right due to the above-noted agreement in 1955 between Japan and the USA, and therefore their “private property” had been sacrificed for the public good (i.e., damage had been generated). (Below, these suits filed for the two different claims are referred to together as “the Workmen’s Accident Suits.”)

Naturally, many among the vessels exposed to radioactive fallout in the H-bomb tests were registered in prefectures outside of Kochi. Civil litigation regarding the H-bomb tests, however, had been presented only in Kochi Prefecture. This was because in Kochi Prefecture, an educator by the name of Yamashita Masatoshi had been conducting an investigation into the H-bomb tests for some 35-plus years via a seminar he was leading for students of Hata High School, and they had been holding hearings with former crew members or their surviving families within the prefecture.

Yamashita taught at the high school, and in 1985, he and his students began interviewing crew members who had been exposed to fallout during the H-bomb tests. Their investigation has continued since then to the present day. During that time, many of the volunteers came to share the strong conviction that it had been wrong to hush up the Bikini incident, and they have supported investigational and other activities.

Evidence is essential for a trial. No matter how much truth is on your side, without providing proof through evidence you will lose your case. In Kochi, however, thanks to efforts such as the above-mentioned investigation, there were records remaining of valuable testimony from exposed crew members who had since passed away and were no longer around to testify.

The costs of the Workmen’s Accident Suits are being covered by donations, so our finances are not exactly abundant. If the trial is moved to the Tokyo District Court, it will be hard to continue pursuing it from the standpoint of costs. Moreover, the valuable evidence regarding the H-bomb tests is in Kochi and the exposed crew members among the plaintiffs are all advanced in years. It would be impossible for them, for example, to go to the Tokyo District Court for questioning. Thus, the Workmen’s Accident Suits must proceed in the Kochi District Court and although we are completely unhappy about the case not coming to trial, we cannot compromise.

Their exposure was not their fault in the least, and there was no reason why they should resign themselves to their fate. Despite that, the agreement between Japan and the USA made it impossible for them to hold the latter to account legally, and this was imposed arbitrarily on the victims, who have been denied any form of legal remedy thus far. Far from that, they have never had their health investigated adequately, nor even been granted information.

They are seeking indemnity from the Japanese government, and the reason they are asking them to be the defendant in this case is, first, to force the state to face the facts squarely.

In these ways, the great significance of these lawsuits is thought to surpass the matter of simply winning or losing them.