On July 12, the Working Group on Verification of Power Generation Cost (hereafter, WG) of the Advisory Committee for Natural Resources and Energy, an advisory body to the Ministry of Economy, Trade and Industry, announced the outline of a new estimate of power generation cost. CNIC presented information on the costs of nuclear power generation at the 6th meeting of the WG (July 7). Here, I will explain the content of this new cost estimate and its limits.

First, let’s have a look at this new estimated cost of power generation. The cost of generating electricity per kWh is calculated by dividing the total cost of the new installation of a power source in 2030 by the total generated power, assuming it operates for a certain number of years (40 years for nuclear power plants) at a certain facility utilization rate (70% for nuclear power plants).

The most remarkable feature of this estimate is that the cost of generating electricity at nuclear power plants was not shown to be the cheapest for the first time ever in estimates made by Japanese government, including the Ministry of Economy, Trade and Industry (METI).

In estimates drawn up by METI thus far, whenever the cost of generating electricity at nuclear power plants seemed likely to be higher than that of other power sources, tricks such as altering the estimation method were used to make it look as if, on the basis of calculations, nuclear power came out looking cheaper. For example, in a power generation cost estimate carried out in 2011, CO2 countermeasure costs were included on the assumption that emissions trading, which has not yet been fully introduced in Japan, had been introduced. Further, in an estimate put together in 2015, nuclear power plants maintained their status as the cheapest power source due to a change in the calculation method for accident risk response costs and the soaring resource prices at that time. However, in the latest estimate, there has been little option but to accept the reality that nuclear power is no longer a cheap power source. 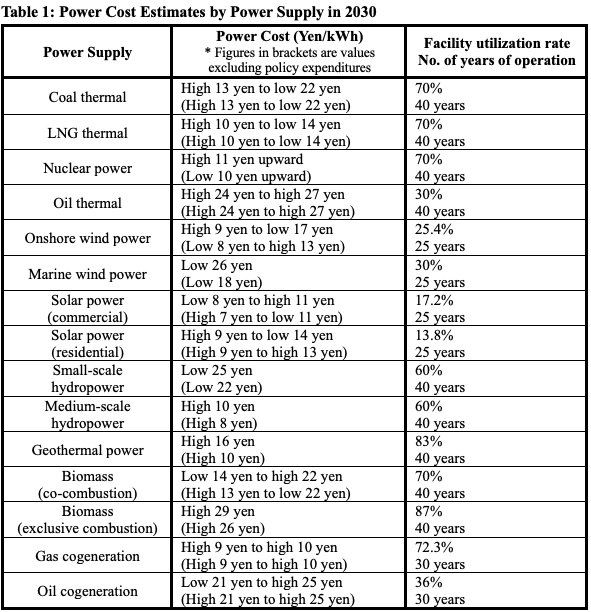 In the end, while calculations were also performed using capacity utilization rates of nuclear power plants of 60% and 80%, and an operating period of 60 years, the basic scenario was maintained at 70% and 40 years.

This estimate can be given a favorable evaluation to some extent since it is the first time the government has admitted that nuclear power is not the cheapest power source. However, there are still many problems.

Members of the working group reported that, due to improvement and standardization of nuclear power plants, capital costs no longer fluctuate, but is that true? Construction cost per kW since 1980 is shown in Figure 1, which shows an upward trend. 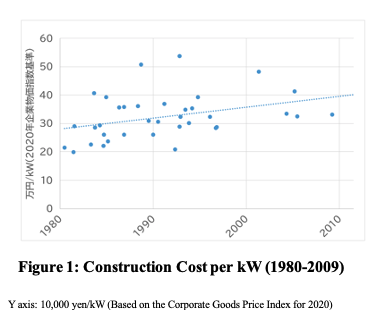 Looking by reactor type, PWRs show little upward trend, while BWRs show an observable upward trend. There may be factors other than improvement and standardization. In Europe and the United States, construction costs have soared because structures have become more complex due to safety measures, the lengthening of construction periods, and other factors, but the same can also be said for Japan. The cost of complying with the new regulatory standards is estimated separately as additional safety measures, but this is calculated by subtracting the portion that would be unnecessary in the case of a new construction using the additional costs that have been incurred in existing nuclear power plants, but it is unclear whether this is a reasonable figure.

CNIC provided information to the WG to argue these points, but they were not adopted.

Since 30 to 40 years are required to decommission a nuclear power plant, this differs from other power sources. If these long-term costs are not taken into account, the cost of generating electricity from nuclear power plants would be estimated at an unreasonably cheap level.

CNIC provided information to the WG to argue these points, but again they were not adopted.

The “estimate of marginal cost reflecting system integration” was reported in the 5th WG meeting. In the report, cost estimates reflecting the integration of systems including nuclear power plants are reported (see Fig. 2). This is a calculation based on a certain model in which the cost to the entire power system when each power supply is increased by a certain amount is regarded as the “integration cost,” which is considered to be a cost incurred by the increased power supply.

With the premise of the system restrictions in the power supply mix in 2030, the “integration cost” (costs of the decrease in thermal efficiency and use of pumped water, etc.) incurred over the entire power system in the case that each power supply is increased by a certain amount and the entire costs are considered to be incurred by the increased power supply.

Blue columns: Cost per kWh when a new power supply facility is constructed and operated on a vacant site

Yellow dots: Cost after imputing entire costs to the power supply in question

The price of electricity on the power market soared from December 2020 to January 2021. This factor was explained in detail in CNIC’s Japanese newsletter and in the Japanese language research report “Is the Prolonged Regular Inspection of Nuclear Power Plants the Cause of the Steep Rise in the Wholesale Electricity Market Price? The Hidden Risk of Huge Power Sources?” (cnic.jp/39079), and it is suspected that the price rise is causally related to prolonged regular inspections of nuclear power plants by Kansai Electric Power Co.

Power output per nuclear power plant is too large to adjust. Backup power must also be available in the case of an outage. While instantaneous outages are serious, if the outage is prolonged, the impact will be huge. In addition, due to the inherent danger of nuclear power plants, problems found at one plant may spread horizontally, resulting in the shutdown of multiple nuclear power plants. In this case, the impact on the power system would be more severe.

Aside from the cost of integrating nuclear power plants, another concern is how to deal with cloudy or calm periods in renewable energy. Installing large numbers of new batteries would be extremely costly. However, if the batteries of electric vehicles, expected to increase in the future, can be utilized, the cost may be significantly reduced.

These costs are not taken into account in the new estimate, but will be estimated anew after the 2030 power supply mix is announced – something we need to keep an eye on.

Despite the many problems, the results of the latest calculations have finally led Japan to recognize the standard international awareness that nuclear power plants and coal-fired thermal power plants are not as cheap as solar power, wind power, or LNG. This result will of course have a major impact on future energy policy.

It is also important to note that in addition to the cost of power generation by single facilities, integration costs have now been taken into account. This could possibly lead to moves to estimate the costs of variable power sources such as solar and wind power at a higher level.

In March 2021 Kansai Electric Power Co. and Chubu Electric Power Co. ended their contracts with the Shika NPS, even though they had regarded Shika as equivalent to their exclusively-owned power supply facility, on the pretext of expiration of contract. It appears that the structure that has maintained the nuclear village thus far is incapable of coping with the realities of power liberalization, the decline in electricity demand, and the inability of nuclear power plants to resume operations even after ten years.