The 2022 Fukushima Peoples’ Rally for Achieving a Nuclear-Free Fukushima

“The 2022 Fukushima Prefectural Residents’ Rally for Achieving a Nuclear-Free Fukushima” was held on March 12, hosted by the planning committee, comprised of the Fukushima Peace Movement Forum and ten other organizations. In the event held in Fukushima City, only a limited number of people were allowed to participate to prevent the spread of COVID-19 infection, and the rally was live-streamed online for those who were unable to attend. 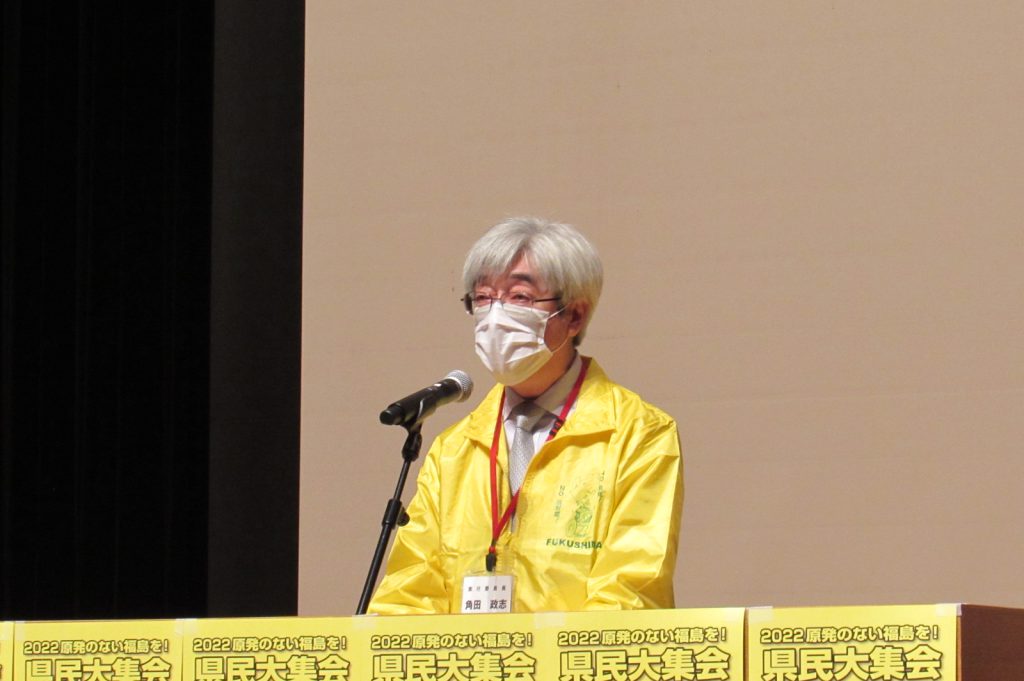 Eleven years have passed since the 2011 nuclear accident at the Fukushima nuclear power plant, and this year is the 12th spring. The memories of the severe accident are fading year by year in many people’s minds. At this time of year, we are holding the Fukushima People’s Rally to confirm the current situation in this prefecture, problems that should be resolved, reconstruction of local people’s lives and the progress in the economic recovery, among other things. We plan to distribute the results of our discussions to many people online.

However, the reconstruction of local people’s lives and the economic recovery has progressed very slowly during the past eleven years.

In April 2021, the Japanese government suddenly decided on a policy to release the water from the Fukushima Daiichi Nuclear Power Station (FDNPS) into the ocean after it is treated by a multi-nuclide removal system called the Advanced Liquid Processing System (ALPS). This decision was made in spite of stiff opposition from local fishermen and other people in various local industries. The government determined to do so without seeking the understanding of many prefectural residents or other people concerned.

Even now, the people in the fisheries industry are opposing the decision, claiming that the discharge of contaminated water into the sea would threaten their future livelihoods.

Moreover, many local municipalities are expressing objections to the new policy, or calling on the government to take a more cautious approach to the problem.

Despite the strong local opposition, the government and plant operator Tokyo Electric Power Company (TEPCO) Holdings, Inc. are insisting that the release of the ALPS-treated water is necessary for decommissioning of the nuclear power plant. This means that the government and TEPCO plan to make a sacrifice of the Fukushima prefectural residents for the second time, once when they caused the disastrous accident in 2011, and now in the decommissioning process.

The government says it will provide thorough explanations to local residents about the new policy, and will make efforts to win their understanding. But this does not mean that the government and TEPCO will listen to the opinions of the people in the fisheries industry, prefectural residents and other people concerned. It also does not mean that they will respond to local concerns and protests by holding public discussion meetings to try to find the best possible solution jointly. What they call “thorough explanations” means “to try to persuade the public that it is safe to discharge the contaminated water after mixing it with seawater and diluting it.” In other words, the government will strive to force the public to understand the government’s policy.

The Ministry of Economy, Trade and Industry (METI) and the Reconstruction Agency have distributed directly to local public schools a leaflet that contains additional advice for the use of the Supplementary Textbook on Radiation. The leaflet says it is necessary to acquire correct knowledge on radiation and emphasizes that the ALPS-treated water is safe. The government aims to diffuse the idea that “the ALPS-treated water is safe” to the parents through their children. This step violates the neutrality and impartiality of education and we strongly protest against it.

The decommissioning work at the Fukushima nuclear power plant will take many more years. In addition to the disposal of the ALPS-treated water, we may have to tackle many other problems and tasks, such as removal of decontamination waste from the temporary storage facilities, and retrieval and disposal of nuclear fuel debris from the reactors. These problems and tasks are deeply connected with the life of the local people and will continue to be so for future generations. For this reason, this is not a matter peculiar to Fukushima alone, and should be discussed by the public nationwide.

So, let’s join hands in order to prevent a recurrence of the disaster caused by the 2011 nuclear accident in Fukushima, and to create a nuclear-free society.

The invasion of Ukraine by Russian forces still continues and many civilian casualties have been reported, including children. It was shocking for me to hear the news of the Russian shelling of Chernobyl NPP and Zaporizhzhia NPP. It is generally believed that nuclear power plants were designed for the peaceful use of nuclear materials. But once these facilities are exposed to terrorist attacks or invading military forces, they will become great threats, as disastrous as nuclear weapons. Under such circumstances, a nuclear plant can be used in the same way as a hostage.

Many people may think about ways to prevent exposure to such threats and try to avoid the risk of becoming victims. But few of them consider ways to avoid the situation where they become aggressors. The ruler, however, is always eloquent and clever in his speech. Therefore, we must work together and cooperate in order not to create aggressors.

Professor Koyama Ryota’s profile: Professor of Food and Agricultural Science at Fukushima University. Former member of the subcommittee on the release of ALPS-treated water

1. The government and TEPCO have previously promised to the people in the fisheries industry that the ALPS-treated water would never be disposed of in any way before they obtain consent from the local people concerned. But they broke their promise and decided to release the water into the sea. Their action is a big mistake, damaging mutual trust with the local people, and this is impermissible. What do the government and TEPCO think about the strong reaction of the local people against their decision? What kind of discussions were held in the subcommittee meeting?

Professor Koyama: the subcommittee is not a decision-making panel, and its main task was to make recommendations to the government. To create mutual trust with the people in local industries, residents of Fukushima Prefecture, the Japanese public, and people in foreign countries, it is crucial to hold discussions thoroughly before coming to a decision, and we have repeatedly emphasized this point. Nevertheless, such discussions were never held, and the water-release decision was made without seeking understanding of the people concerned. This is a very grave situation.

Professor Koyama: In the first place, the government has yet to formulate an image of the Fukushima nuclear plant after the decommissioning work is completed 30 or 40 years from now. The subcommittee’s secretariat also has the perception that both the process and technology for the decommissioning are still unclear. If the government unilaterally seeks understanding of the public by emphasizing the safety of the release of the contaminated water into the ocean, the contradictions will widen still further. This is not a good thing to do.

3. Some people call for measures other than the discharge of the water into the ocean, such as continuation of the storage of water on the land, research and development into new technology for separating tritium from the water to push down the level of radioactive contamination, and measures for reducing the amount of contaminated water. Did the subcommittee discuss these measures?

Professor Koyama: The subcommittee discussed the effect of these five measures on the society, including the storage of the water on land, but from the start of the meeting the discussion was based on the assumption that the tritium-containing water would be released into the sea. There is a tract of land large enough for building additional water tanks on the northern side of the plant premises, but the government maintained that the space was being kept for other purposes and was not available for storing the contaminated water. Although we expressed various kinds of opinions at the subcommittee meeting, the government failed to provide more information on this issue. The government should have collected more information from a far wider perspective. 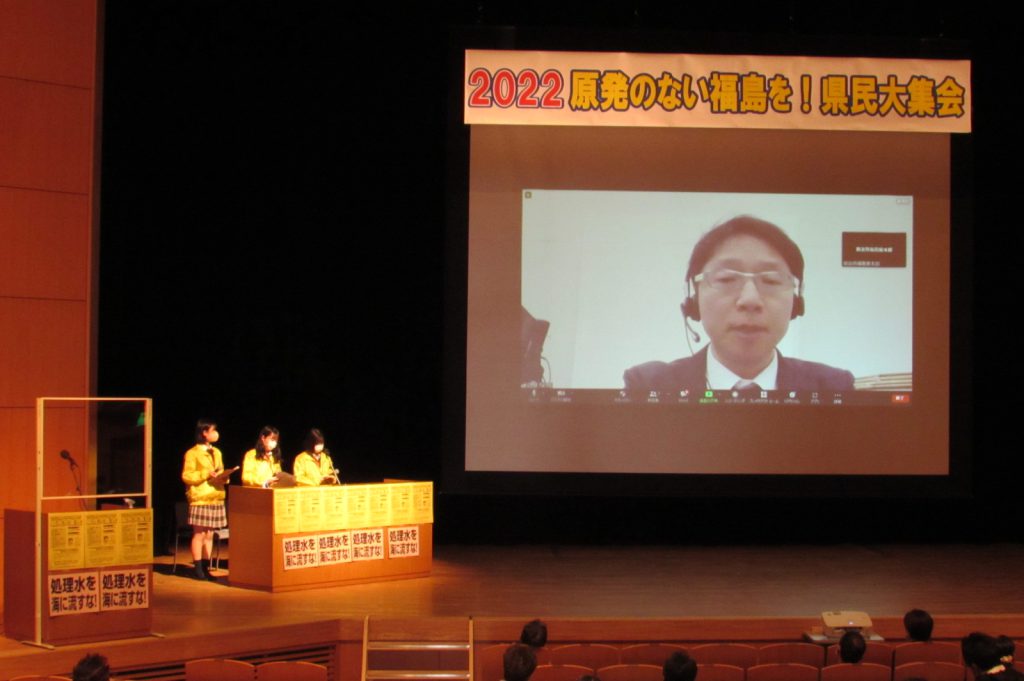 1. Radioactive materials will be concentrated in the food-chain. This means marine products will be contaminated and the people who consume such food may suffer from the pollution. Does that mean it is being predicted that we will also suffer damage?

Professor Koyama: There have been no scientific reports that tritium alone causes a negative effect on the food chain. But there are some reports that the radioactive substances other than tritium, such as cesium, inflict damage on the natural environment.

2. How many years do you think the release of the radioactive water will continue, and how reliable and trustworthy are the safety standards concerning the release operation?

Professor Koyama: The discharge of the contaminated water into the ocean may continue for 30 to 40 years. The question is, whether this project will be implemented properly, without causing any accidents, and whether the data will be published correctly in the meantime. But if the plant official in charge of the water release fails to change the ALPS filters regularly, there is a possibility that an accident might occur. For example, the release of not only tritium but also other radioactive substances, such as cesium, for six months or so. This kind of accident is likely to happen during the next 40 years. It is also likely that the official in charge of the water release may be transferred to a different post. In this case, it may become questionable whether the project will be carried out safely or not.

To ensure safety, it is essential that the project is scientifically safe, and that the official responsible for the project should be known to the local residents. There needs to be “mutual trust” between the public and TEPCO.

The High School Peace Ambassadors have conducted a questionnaire survey asking 150 high school students about the release of the ALPS-treated water to the ocean. About 60 percent of students said they did not know about it, and about 50 percent said it was admissible. According to the peace ambassadors, this means that some of these students are likely to have made their decisions without knowing very much about the actual situation and formulated their replies by looking at the matter from just one side. They also said the same thing can be said about the distribution of the above-mentioned leaflets. The Japanese students have the perception that the things they learn at school reflect truth and are facts, and they never have any doubts about it.

The ambassadors said they would continue their activities to urge Japanese students to acquire more knowledge and expertise independently, and regard various problems and incidents in society as something they must deal with themselves.

The ambassadors then expressed opposition to the discharge of the contaminated water.