On April 28, an international symposium was held to commemorate the opening of CNIC’s special website focusing on the nuclear fuel cycle. The symposium was titled “Nuclear Crisis and Peaceful Uses of Nuclear Energy: Implications of the Operation of the Rokkasho Reprocessing Plant”. Four speakers participated: Frank Von Hippel of Princeton University and Alan J. Kuperman of the University of Texas from the U.S., Jungmin Kang, former chairman of the Nuclear Safety Commission from South Korea, and Aileen Mioko Smith of Green Action from Japan. Each gave a keynote speech, followed by a question and answer session.

Prof. von Hippel’s presentation was titled “Ukraine and Nuclear Threats,” and he pointed out that an accident caused by an attack on a nuclear power plant during a war could cause more damage than the Fukushima nuclear accident. While the Fukushima accident released only 2% of the radioactive cesium contained in the entire fuel, if the spent fuel pools and radioactive waste storage tanks are destroyed in an attack and lose their cooling capabilities, much more radioactive material would be released and the evacuation order would cover a much wider area than in the case of Fukushima.

He also pointed out the uneconomical nature of maintaining nuclear fuel cycle facilities; recycling plutonium in MOX fuel is around 10 times more expensive than the equivalent amount of low-enriched uranium fuel and asked the question: Is  one reason that the Japanese government maintains unnecessary and uneconomical nuclear fuel cycle facilities that they want to keep the option of developing nuclear weapons open? While JNFL’s uranium enrichment capacity is so small that it cannot even provide fuel for a single nuclear reactor, it can produce 300 kg of weapons-grade uranium per year. Von Hippel maintains that our goal should be zero nuclear weapons, zero separated plutonium, and zero national enrichment plants. The fact that nuclear weapons have not been used since Nagasaki can also be described as luck; there have been threats and false alarms, and we do not know if this luck will last forever. That is why he suggested that the Japanese government should call for no first use of nuclear weapons and participate as an observer in the first Conference of the Parties to the Nuclear Weapons Convention.

Prof. Kuperman spoke on “Nuclear Facilities and Terrorism,” pointing out two terrorist threats, particularly at the Rokkasho Reprocessing Plant in Aomori Prefecture. The first is the theft of plutonium for the purpose of producing nuclear weapons. When the Rokkasho reprocessing plant is operational, it will produce 8,000 kg of plutonium per year. The problem is that it is difficult to detect plutonium theft under IAEA safeguards. The IAEA itself admits that the level of safeguards is such that it cannot confidently detect a diversion of less than 246 kg of plutonium at a large-scale reprocessing plant such as Rokkasho. In other words, it is possible for terrorists to steal 8 kg of plutonium, enough to produce a Nagasaki-class atomic bomb, before the theft could even be discovered. Furthermore, it is plausible that terrorists could produce a simple nuclear weapon by improvising designs and technologies that are existing and readily accessible, even for those who have never before built a nuclear weapon.

The second threat is an attack on the spent fuel pools which could spread unprecedented amounts of radiation. The Rokkasho Reprocessing Plant stores approximately 3,000 tons of spent fuel. This amount is 30 times the amount contained in the core of a typical large nuclear power plant. If the storage pools were attacked and a fire broke out, it could release more radioactivity than either the Fukushima accident or any other nuclear power plant in the world. While the damage caused by the Fukushima accident was enormous, the reactor containments stayed largely intact, preventing the release of most  of the radioactive material, and there were no fires in spent fuel pools, so it can be said that only a “relatively small amount” of the radioactivity was released. If an accident had occurred at Rokkasho, however, the damage could have amounted to several hundred trillion yen, he said.

Dr. Kang presented his own simulation of an accident caused by an attack on Unit 1 of the Zaporizhzhya Nuclear Power Plant (Fig. 1)

Assuming that the core meltdown released 157 PBq (petabecquerel, 1015), or 50% of the total amount of cesium-137 in the fuel of Unit 1, and at the same time fire in the Unit 1 spent fuel pool released 590 PBq, or 75% of the total cesium-137 in the pool, Kang estimated how many people would be displaced using the Chornobyl (Chernobyl) nuclear accident standards (Table 1). According to this estimate, under the weather conditions of the third week of March, when the actual attack occurred, it was expected there would be up to 3.6 million people in Ukraine and hundreds of thousands to millions of compulsory relocated populations in Romania, Belarus, and other countries. 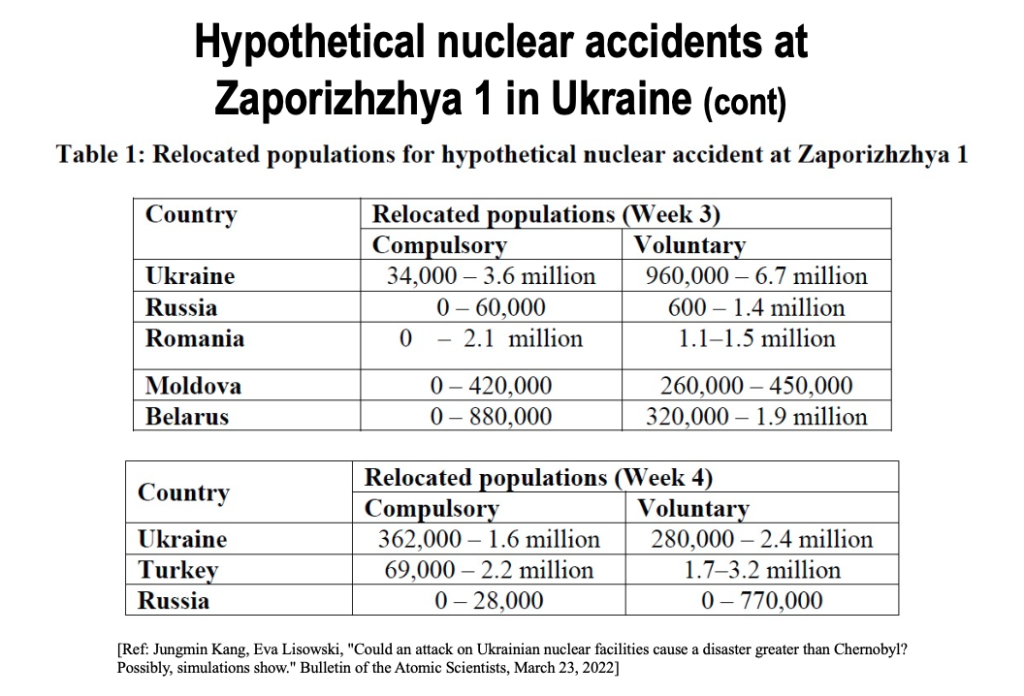 Ms. Smith explained the domestic and international impacts of the Rokkasho Reprocessing Plant starting operations. Regarding domestic impacts, in addition to economic costs, she cited pressure to expand the number of reactors using MOX fuel, exacerbation of the high-level nuclear waste problem due to an increase in the amount of spent MOX fuel on reactor sites, pressure to promote MOX fuel fabrication plants in Aomori Prefecture, and pressure to build the Ohma Nuclear Power Plant, which is to be entirely powered by MOX fuel.

Regarding the international impact, she cited nuclear proliferation, the increased possibility of nuclear terrorism, and opposition to the release of radioactive materials into the ocean.

She concluded by highlighting ways to prevent the commencement of reprocessing plant operations, including reducing the number of operating nuclear power plants in Japan and eliminating the demand for plutonium, conducting lawsuits, expressing public opposition, and for local governments to express concern.

After the lectures, there was a question-and-answer session. When asked if he had a message for nuclear scientists and engineers, Prof. von Hippel commented that nuclear engineers are  more like a community of religion than science. In particular, he said, it is like a religion to still believe that the technical problems of fast breeder reactors can be overcome despite the obvious failures of Monju and other reactors.

When asked why the Japanese government is promoting the nuclear fuel cycle despite such major economic and technical problems, Ms. Smith explained that this is their way to deal with spent fuel and to buy time to avoid facing the nuclear waste problem head-on. She also pointed out that although policy makers know there are costs and other political issues involved in disposing of radioactive waste, no one wants to take responsibility, so they do not even discuss them.  It is very difficult to find a facilitator, someone trusted by all sides, to bring everybody to the same table for open and honest discussions on this issue.

Prof. Kuperman noted the particularities of the two countries that insist on continuing reprocessing, namely Japan and France, even though five of the seven countries that had reprocessing  programs (UK, Germany, Switzerland, Belgium and Netherlands) have stopped them. He explained that the reason reprocessing can continue in these two countries, despite the fact that it is dangerous, uneconomic, dirty, and unpopular, is because of the institutional support of bureaucrats and engineers. Both Japan and France, have strong state institutions and it is more difficult for civil society to exert its influence, although civil society should still aim to change the system by raising their voices in opposition.

In response to a question about the future of reprocessing in Korea, Dr. Kang pointed out that the present Yoon Seok-youl administration also intends to vigorously promote pyro-processing, a dry reprocessing technology. Proponents of this policy point to Japan and say if reprocessing can be done in Japan, why not in Korea? On the other hand, he explained that there could also be a political will to have a nuclear weapons development capability to counter North Korea.

The speakers and discussion with participants highlighted the serious dangers associated with reprocessing, from the threat of war and terrorism to the economic and technical problems with this technology. Despite all these undeniable serious problems, the Japanese government is determined to proceed with the Rokkasho Reprocessing Plant and its nuclear fuel cycle policy. The possible reasons for this were also made clear in the symposium, including the government’s desire to maintain the nuclear weapons option, as well as the strong state apparatus which keeps the nuclear juggernaut afloat. However, possible ways to stop this disastrous project were also mentioned and we hope that the CNIC special website on the nuclear fuel cycle*, which was launched at the end of the symposium, will inform the wider public of the dangers and other problems of Rokkasho as well as inspire more people to oppose the nuclear fuel cycle and together build alternatives.