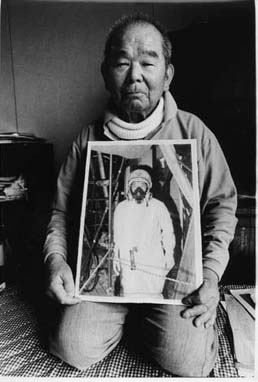 On January 13th the Tomioka (Fukushima Prefecture) office of the Labor Standards Office accepted the claim of Mitsuaki Nagao that his multiple myeloma (a form of bone marrow cancer) was contracted as a result of his work at nuclear reactors. The decision relates to work that Mr Nagao (78) did for a construction company on the piping of nuclear reactors and also as a superviser of such work.

In multiple myeloma the bones throughout the whole body are weakened and become prone to breaking suddenly. The condition is also associated with a whole range of problems with other organs. While he was still waiting for a decision on his case Nagao, who has suffered with the condition for six years, said, “Many people have been irradiated through their work at nuclear reactors. I would like them to sue as I have done. That is one of the reasons why I have to win.”

Nagao’s work, record of illness
From October 1977 (when he was 52) to January 1982 Nagao worked at Fukushima Daiichi Nuclear Power Station Reactors 2 and 3, Hamaoka Reactors 1 and 2 and Fugen Advanced Thermal Reactor. During that period he received radiation doses totaling 70 millisieverts. If you convert this to a yearly dose, it works out at between three and eight times the average for workers at each of the nuclear power plants in Japan. Compared to other subcontractor workers, who are often forced to work in highly contaminated areas, his dose was 1.5 to 3.5 times the average. At the time that he was working at Fukushima Daiichi Nuclear Power Station Reactor No. 2, there were several cases of fuel rods being damaged. Consequently workers were exposed to very high levels of radiation.

Nagao was a naturally healthy person. He worked right through to retirement with no particular health problems, but his blood pressure began to fluctuate in 1993. In 1994 he began to get pain in his neck, then in 1998 his front tooth broke and he also had to have an operation after fracturing his neck. It was then that he was diagnosed as having multiple myeloma. He has also had more problems since then. On cold days the upper half of his body becomes unbearably painful and now his collarbone has dissolved.

Connection between multiple myeloma and radiation
Although there were no instances of multiple myeloma being accepted in workers’ compensation cases, the incidence of multiple myeloma in Hiroshima and Nagasaki hibakusha is high and in the last ten years there have been seventeen cases of people being recognized as having atomic bomb disease. The Ministry of Health, Labor and Welfare (MHLW) standard for workers’ compensation for leukemia requires that the worker received a dose of over 5 millisieverts multiplied by the number of years of work and that the onset of the disease was at least one year after the exposure. Nagao was exposed to about three times that amount, but because multiple myeloma was not a recognized condition, the Tomioka Labor Standards Office referred the case to MHLW for a decision.

MHLW established a committee of experts to investigate whether disorders caused by ionizing radiation may be work related (a closed committee chaired by Kunio Sakai, a Professor at Niigata University). The committee considered the nature of the work and the dose, and conducted a literature survey of national and international epidemiological studies related to multiple myeloma. They announced their conclusion at their third meeting that there is a cause and effect relationship.

Nuclear power plants have been in operation in Japan for 37 years. In that period only 14 workers have applied for workers’ compensation for conditions caused by radiation. Three of those cases related to the JCO criticality accident and were not therefore associated with work at nuclear reactors. From that, one can gather how difficult the process of lodging such a claim is and how many would be applicants must have fallen by the wayside.

The biggest reason for this is that the thing which would provide evidence of radiation exposure, the ‘radiation control hand book’, is held by the company, not the workers. Also there is a lack of systematic health monitoring. Since April 2001 it has been a requirement that records of radiation doses and health examinations be held for thirty years, but before then they were only held for the extremely brief period of five years. Especially in the case of subcontractor workers, there are problems such as companies going bankrupt, or records being lost. The Radiation Dose Registration Center, run by the Radiation Effects Association, was established in 1977 with the aim of accurately ascertaining and managing in a unified manner the radiation doses of workers. There are currently almost 400,000 people registered. However, even if a worker personally applies for his or her radiation records, without the company’s agreement the information will not be provided. Moreover, where people have requested this information, there have even been cases where the worker was subjected to pressure from the company, the end result being that they lost their chance of applying for workers’ compensation.

The total radiation exposure from Japan’s 53 nuclear reactors in 2002 represented an increase of 6 person-sieverts on the previous year. This increase was due to the inspections that followed the exposure of scandals involving the concealment of problems at Tokyo Electric Power Company. With the aging of reactors the contamination of the work environment is getting worse and worse. Safety measures for workers exposed to radiation is now an urgent issue.

Finally, as an aside, another example of a worker applying for radiation related workers’ compensation for a condition other than leukemia relates to a man who contracted malignant lymphoma while working at the Kori Nuclear Power Plant in South Korea. The probability of it being work related was assessed as low, but, dissatisfied with this conclusion, he took out a lawsuit and in June last year he emerged from his court battle victorious. It would be interesting to hear the situation in other countries. If anyone has information about radiation-related workers compensation cases for conditions other than leukemia, please let me know.