Is Japan qualified to undertake reprocessing in Rokkasho? Nuke Info Tokyo No. 99 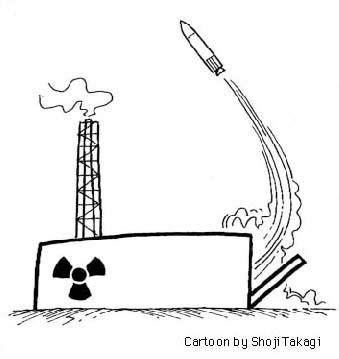 However, on the basis of this proposal, we are immediately able to make the following point. Since it can be argued that Japan does not already possess ‘full-scale, functioning enrichment and reprocessing plants, why is the President silent about Japan’s stockpile of plutonium and the spent fuel reprocessing plant being developed in Rokkasho Village, Aomori Prefecture?

It must be stressed that the definition of ‘full-scale’ and ‘functioning’ is extremely vague. In the President’s mind Japan is obviously a supplier of this equipment and technology. But what is the real situation?

Japan has an enrichment plant in Rokkasho, Aomori Prefecture, which is operated by Japan Nuclear Fuel Limited (JNFL) as a commercial venture. It has a theoretical capacity of 1500tSWU/year, though its actual output has never exceeded 1050tSWU/year. At the moment it is unable to achieve even this reduced amount, due to the fact that operations at part of the plant have been suspended. This results in an additional short fall of 300tSWU/year, which is likely to increase to 450tSWU/year this Spring. Its highly questionable whether this can be called ‘full-scale, functioning’.

There are even bigger problems associated with the reprocessing plant. There is a plant owned by Japan Nuclear Cycle Development Institute (JNC) in Tokai Village, Ibaraki Prefecture. This is a developmental level plant, not a commercial facility. The plant being constructed by JNFL in Rokkasho is not complete and there are lots of doubts about it as an operational proposition.

If the Rokkasho plant becomes operational, the plan is that it will have the capacity to reprocess 800tU of spent fuel and recover just under 5t of fissile plutonium each year. Plans for the use of this fuel have not progressed at all. As at the end of 2002, there was 38.7t of separated plutonium belonging to Japan, 21.6t held in France, 11.6t in the UK and 5.4t stockpiled in Japan. If Rokkasho becomes operational, this will mean that much larger quantities of plutonium will be held within Japan than in the past.

Anyone who cares to look into the issue will see that to accept the situation in Japan, while requiring other countries in the region not to possess enrichment and reprocessing equipment and technologies, is patently unjust.

The checks on nuclear proliferation have been removed

The debate about whether or not to go nuclear is beginning to raise its ugly head in Japan. Even setting aside the irresponsible remarks of some commentators, one must be concerned by suggestions coming from people in official positions, such as Dr Tadashi Nishihara, President of Japans National Defense Academy (JNDA). He argued in the 14th August 2003 edition of the Washington Post that America should not sign any pact promising that it wont use nuclear weapons against North Korea. He went on to say, ‘Facing that possibility, Tokyo could no longer rely on its alliance with Washington and thus might decide to develop its own retaliatory nuclear weapons.’

In November of the same year the Mainichi Shimbun newspaper surveyed 480 successful candidates in the lower house elections. 82 of these politicians (17% of those polled) responded that the question of Japan obtaining nuclear weapons should be considered ‘immediately’, or ‘depending on the international circumstances’. (One of those surveyed said ‘immediately’.)

Despite this situation, the Atomic Energy Commission (AEC), which is supposed to be ‘the guardian’ of the principle that the development of nuclear energy is limited to ‘strictly peaceful purposes’, has lost its institutional ability to provide this guarantee, while the individual commissioners have lost their sense of resistance to the idea of acquiring nuclear weapons.

AEC is made up of 5 commissioners. This year, for the first time, four of these were replaced by new commissioners. On 6th January the new commissioners articulated their basic stance and major policy objectives in their New Year Policy Statement. However, not a single word was said to the effect that they would guarantee that Japans use of nuclear energy would be strictly limited to peaceful purposes, as required by the Atomic Energy Basic Law.

The institutional assurance afforded by AEC as the ‘guardian’ of the principle of ‘strictly peaceful purposes’ disappeared when revisions to the Law concerning the Establishment of the Atomic Energy Commission and the Nuclear Safety Commission of Japan came into force in January 2001. These revisions were made as part of a general reorganization of government departments. One of the changes was the deletion of the clause which required that the Chairman of AEC must be the Minister of State responsible for the Science and Technology Agency. Since the Minister is a member of the Cabinet, previously no Cabinet decision could be made to acquire nuclear weapons if the AEC opposed it (given that Cabinet decisions are made on a consensus basis). Regardless of whether in practice the Minister could have resisted pressures to compromise on this issue, this check has been lost.

One further deletion was the clause which required that the Prime Minister must ‘give due respect’ to decisions of the AEC. The fact that respect for the decisions of the Prime Ministers advisory panel was established in law provided an assurance that Japans development of nuclear energy would be strictly limited to peaceful purposes, but that guarantee has been lost.

These profound institutional changes came in the midst of the confusion associated with a huge reorganization of government departments and passed smoothly through the Diet without debate. It appears that there was no debate within the AEC either, which is just one piece of evidence that the commissioners had no sense of being ‘the guardians’ of the principle of ‘strictly peaceful purposes’.

At the very least they should recall that they are supposed to be ‘the guardians’ of the principle of ‘strictly peaceful purposes’ when they assess whether there is any danger that nuclear reactors and reprocessing facilities could be used for other than peaceful purposes. However it seems that this screening process is conducted in name only. The results of AECs considerations are submitted to the Prime Minister with a one line comment, ‘accepted as appropriate’, without giving any explanation of the process by which this conclusion was reached or the reasons justifying it.

The lack of awareness of the commissioners was made plain at the 4th June 2002 AEC meeting. On 31st May Chief Cabinet Secretary Yasuo Fukuda had said at an informal meeting with the press that “if international tensions increase, regardless of the three non-nuclear principles, the general public might say ‘we should acquire nuclear weapons'”. Later, at an official press conference he said, ‘it is possible under the Constitution to have defensive nuclear weapons’. In response to these comments Commissioner Noriko Kimoto raised the question, ‘can we overlook these remarks and remain silent?’ Chairman Youichi Fujiie and Chairmans representative Tetsuya Endo (both have since resigned) rejected Commissioner Kimotos comment saying, ‘the comments were poorly timed, but from the perspective of the Constitution it is as Secretary Fukuda says’. The AEC was also silent in regard to the abovementioned article by JNDA President Nishihara.

We are losing those breaks that might have prevented the Rokkasho Reprocessing Plant from leading to Japans acquisition of nuclear weapons. We wish to sound the alarm about the danger of this situation in the clearest possible terms.