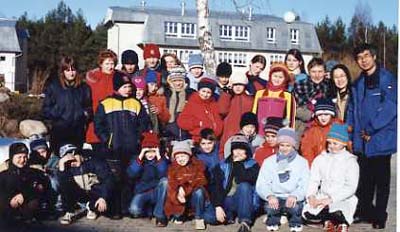 The Chernobyl Children’s Fund, Japan, was founded in 1991 by photojournalist, Ryuichi Hirokawa. On numerous times following the 1986 accident, Mr. Hirokawa photographed on location, where he met children suffering from leukemia and thyroid cancer. He started up aid activities in Japan in response to appeals from the mothers of these children. The movement started with the belief that aid should respond to the requests of local people to the greatest extent possible and it spread to thousands of citizens in Japan. Since the fund’s founding fourteen years ago, a large quantity of medical and health supplies has been sent to Ukraine and Belarus. Mr. Hirokawa has now retired to the position of Advisor, and a Board of Directors (Chaired by Minoru Suzumura) manages the organization.I myself am also a member of the Board of Directors and visited hospitals and aid groups in Minsk and Kiev this spring. It is difficult to obtain necessary medicines in both countries in the midst of progressing inflation and economic crisis. At every hospital I was told of the gratitude felt for the medical supplies sent by the Fund and asked for further aid. I also met with children who had undergone operations for thyroid cancer. These young people are swayed back and forth between hope for the future and uncertainty about their health. The Children’s Fund also conducts a Foster Parents’ Program and scholarship aid. These connect Japanese citizens directly with these children. I realized the importance of continuing to build up links between citizens that will be sustained over the long term.

At the school and sanatorium Hope 21, located in the suburbs of Minsk, children who live in contaminated towns come for one month to study while rehabilitating. The government of Belarus, German NGOs, and the Children’s Fund jointly provide funding for this facility. Children from contaminated areas with a variety of illnesses come to eat safe food, undergo physical examinations and treatment, and nurture their hopes for life through fun activities. As I watched the smiling faces of the children there, I felt the importance of nurturing this hope (see the photo of children from Gomel.). The Children’s Fund also built the sanatorium “South” on the Black Sea coast in Ukraine, to support the rehabilitation of children in the summer.

The Children’s Fund sends out newsletters four times a year to its several thousand supporters to collect support for these activities. Further, a support campaign is conducted every April, this year’s gathering drawing 700 participants in Tokyo. We also sponsor charity concerts in many locations by Nataliya Gudziy. Nataliya became a victim of radiation at age 6 in the town of Prypyat, which is very near Chernobyl. She later studied music and is now active in Japan as a singer. The Office of the Ryuichi Hirokawa Photo Exhibitions also cooperates in collecting donations through holding photo exhibitions of Chernobyl. Even in Japan, Chernobyl is being forgotten as an event of the past, but we are determined to steadfastly continue our campaign. We would also like to hold exchanges with Chernobyl support groups from all over the world. Please feel free to contact us at any time.

*Takayuki Kodera is Vice Chairperson of the Chernobyl Children’s Fund, Japan’s Board of Directors.