My Opinion on Radioactive Disaster Waste Nuke Info Tokyo No. 147 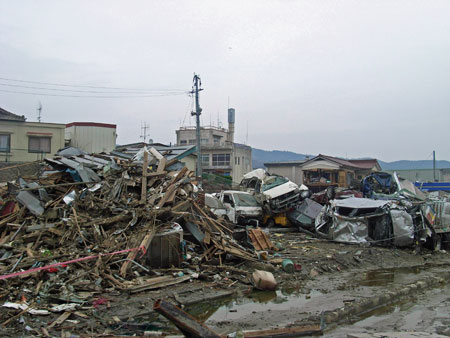 The nuclear disaster cannot be resolved, or at least the resolution will be very difficult, and various problems have erupted. As it is, citizens and residents with no actual responsibility have had resolutions irrationally pushed on them. One issue is the problem of the radioactive disaster waste.

As radiation is released, polluted waste turns into radioactive waste, and the results are not easily anticipated. Large volumes of disaster waste are being irradiated and are becoming radioactive disaster waste. Furthermore, the amount of radioactive materials continues to rise from the “decontamination” of irradiated soil.

And yet the electric power companies and the country had no prepared response to the accident until finally, in August 2011, the establishment of the Act on Special Measures Concerning the Handling of Environment Pollution by Radioactive Materials was announced.

Of course the electric power company was responsible for the disposal of concrete and other materials that were scattered both inside and outside the nuclear power plant area. However, within the Fukushima Prefecture evacuation zone, highly irradiated waste has fallen under the classification “Disaster Area Waste.” Incinerated garbage ash and sewage mud containing radioactive cesium exceeding 8,000 Bq/kg is “Specified Waste,” the disposal of which has become a national issue (“disposal” here meaning collection, transport, storage and disposal, and includes recycling). All waste not covered by the above classifications becomes the problem of the local municipalities.

Regarding waste within Fukushima Prefecture, the government is making requests to the eight towns and villages in Futaba County and the prefecture to establish intermediate storage facilities within the county. Although it has been clearly stated that a “final disposal site outside the prefecture” will be found, there is no guarantee that this will actually be realized. Rather, as rational voices are also saying, the final disposal could take place within the highly irradiated surroundings of Fukushima-1 and 2 nuclear plants.

From the start, however, even as intermediate storage facilities are being rejected, this has been a difficult problem and the road to resolution is a long one.

Disaster waste in Iwate and Miyagi Prefectures is classified with the Ministry of the Environment (MOE) as “Requiring Wide-Area Disposal.” In Iwate Prefecture, roughly 4,760,000 tons (equivalent to approximately 11 normal years), and in Miyagi Prefecture about 15,690,000 tons (equivalent to approximately 19 years) of waste have piled up, and it is reported that “Temporarily installed garbage incinerators are conducting disposal in the disaster zone, but disposal ability is currently insufficient.” It is hoped that about 570,000 tons for Iwate, and 3,380,000 tons for Miyagi can be disposed of through wide area (i.e. to other prefectures) disposal. While it is thought that most of the waste should somehow be disposed of within the prefectures, this will be no easy task.

The Tokyo area has also seen incidents of radioactive waste occurring in normal waste and in incinerated ash in sewage mud, and this waste material is being stored.

Residents of areas where radioactive waste exists and residents of areas who are to be taking in waste are both victims, since neither bear any responsibility for the problem. However, for residents in areas where waste exists, if they cannot have it removed then they will have anxieties over radiation exposure and the waste will be an obstacle to recovery. If the waste is removed, however, the contamination will spread to other areas. For residents in areas to which the waste is to be transported, if they accept the waste they then face fears of radiation exposure, and if they do not accept the waste they could then be accused of blocking the recovery of disaster areas.

Considering the nuclear disaster, these are unanswerable problems. Although involuntarily, the radioactivity has been released. If we must endure this agonizing situation, in what form and to what limits is it to be endured? The answer should be sought in the opinions of the people.

In order to do this, there must be clear information now on how much radioactive disaster waste exists and what the radiation levels are; what categories of waste there are and how urgent the situation is; what problems are anticipated if disposal is delayed, and so on. The very fact that this is a very difficult issue to resolve necessitates that people over a large area be informed, including those who appear to believe that the problem does not impinge on them directly.

Several points should be noted. One is how we think about recycling. According to MOE, “As much as is potentially recyclable” should be recycled. In this context, they are setting the “clearance level” at 100 Bq/kg for radioactive cesium, as set down for nuclear reactor facilities. We believe there is little significance in recycling and oppose the notion that the “clearance level” justifies deregulation for highly dangerous radioactive waste. If we also take into account that this is a time of emergency, we should reach the conclusion that recycling is unnecessary and should not be carried out.

For recycling and landfill, while adopting the clearance level as it is, after landfill the radiation exposure of residents in the vicinity is set at the same annual 10 microsieverts as for recycling, but the workers and residents who work with disposal have a radiation exposure limit of 1 millisievert, 100 times more. It is very hard to say that this has been properly explained.

Is it OK to Simply Incinerate?

Another problem is incineration. If incinerated, radioactive cesium contained within waste is concentrated in the incinerated ash — a bag filter removes 99.99%, an electric dust collector removes 99.47% (though doubts have been expressed about this removal performance) — and the remainder is released into the environment together with exhaust gas .

This becomes acceptable when non-radioactive waste is mixed in and the radioactivity diluted, even when it is above the concentration standard. That is how the guidance is being carried out now. Even supposing we trust the removal performance, since large amounts are burned then large amounts of radioactive cesium are released. If incineration is to be approved, then should not at least the use of nuclear plant waste disposal facilities with the same criteria for radioactive removal be mandated, and guidelines on total volume required?

Fundamentally, radioactive disaster waste is the responsibility of the electric power company, and specialist, high-performance storage facilities should be constructed to manage waste according to waste type and prevent scattering and spillage.

Decontamination tied in with the Act on Special Measures

Finally, looking at a different aspect, the problem is complicated by the return of evacuees being tied in with legislation of the Act on Special Measures for radioactive material decontamination.

On January 26, based on the same Act on Special Measures, MOE announced the “Plan for Decontamination of Special Areas.” The aim is to implement the decontamination of evacuated areas so that residents can return, but is this not totally the opposite of what should be happening?

Highly irradiated areas exist that have not been designated as evacuation areas. People in these areas should be evacuated, and if there is some reason why this is difficult, then the obstacles should be removed. If there are still people who cannot be evacuated from those areas, then the decontamination of their living spaces should take priority.