WHO’S WHO Yukiko Mukai: Helping children from Chernobyl to Fukushima (NIT No. 171) 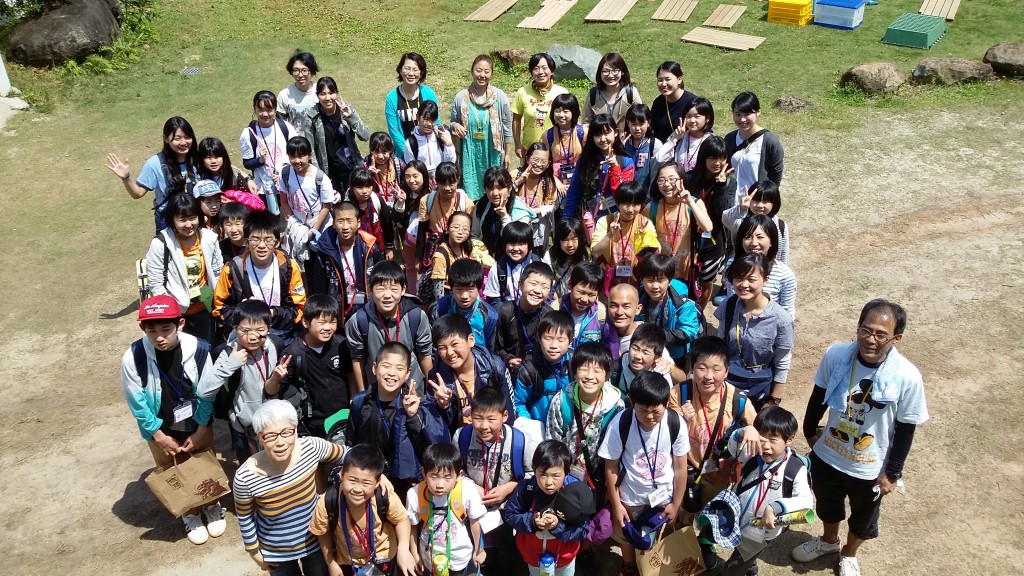 The final day of the 55th Fukushima children’s camp at Kumi no Sato on Kume Island, Okinawa. Ms. Mukai is at the front on the left

Kodansha Ltd, the largest publishing company in Japan, suspended publication of its monthly magazine, DAYS JAPAN, after it published its last issue in November 1989. The first issue, published in April 1988, featured a shocking report by photo-journalist Ryuichi Hirokawa and Takashi Hirose. The article, titled “The Fourth Horror,” focused on problems involving the Rokkasho Nuclear Fuel Reprocessing Facility in Aomori Prefecture, using many photos and charts.
After hearing the news of Kodansha’s decision to suspend publication of DAYS JAPAN, this writer sent a fax to the publisher to express regret over the decision and informed the publisher of our establishment of a group of keen readers of the magazine. Several days later, Ryuichi Hirokawa called me and asked me to help him prepare for the photo exhibition “Chernobyl and the Radioactive Pollution over the Earth” to be held in Shibuya, Tokyo. So I went to the exhibition venue.
Mr. Hirokawa told me that he wished to hold the photo exhibition in many other parts of the country, and called on me to set up a preparatory office and find someone capable of managing the office. I therefore asked two members of the Genpatsu Tomeyou (STOP! NUCLEAR POWER PLANTS) group in Saitama Prefecture, Rei Azumai and Yukiko Mukai, to manage the office. When we had the photo exhibition project on the right track, we began to feel that the exhibition alone was not enough and that we had to do more to support people affected by the nuclear accident. As a result, we launched the Chernobyl Children’s Fund in 1991, with Mr. Hirokawa serving as representative, and Ms. Mukai as chief of the secretariat. (Ms. Mukai currently holds the post of representative.)
Although this organization’s activities were based on information obtained by Mr. Hirokawa during several visits to Chernobyl to investigate the damage from the nuclear power plant there, Mr. Hirokawa also requested that Ms. Mukai take action on a number of new plans. Naturally, Ms. Mukai also went to Chernobyl several times with Mr. Hirokawa to confirm the situation in the area.
There were a great number of tasks to be carried out, such as fund-raising, collecting medicines and other necessary goods, cooperation with the construction and management of a recuperation home in Belarus, inviting nuclear accident sufferers to Japan for recuperation, finding Japanese foster parents for orphans, holding related meetings and concerts, issuing newsletters, and recruiting volunteers willing to work in the organization’s office. It was lucky that Ms. Mukai had accepted the post of chief secretary. I was very thankful for her hard work. Actually, I could not think of anyone else that was more suitable for the post than her.
On March 11, 2011, the nuclear accident occurred at the Fukushima Daiichi Nuclear Power Plant. From that time on, our position has totally changed from support provider to support receiver. Previously, we had a vague hunch that this could also happen to us some day, but it became a reality on that fateful day in March 2011.
In June, 2011, Ms. Mukai set up the Fukushima Children’s Fund as a sister organization of the Chernobyl Children’s Fund. At the same time, she became the director of the “Okinawa Kuminosato,” a recuperation center for the children of Fukushima. (The founder of this NPO is Mr. Hirokawa.) Currently Ms. Mukai is busy going back and forth between Okinawa and Tokyo.
Ms. Mukai is from Niigata Prefecture where the Tokyo Electric Power Company Kashiwazaki-Kariwa nuclear power plant is located. It is the world’s largest nuclear power plant. Although she is currently living in Saitama Prefecture, her eagerness to protect her hometown from the huge nuclear power plant seems to be pushing her to continue working so hard on these anti-nuclear projects.
Ms. Mukai is so busy all the time that I sometimes wonder when she gets time to sleep. I hope she will be able to maintain good health for a long, long time, and continue working for those affected by nuclear accidents.