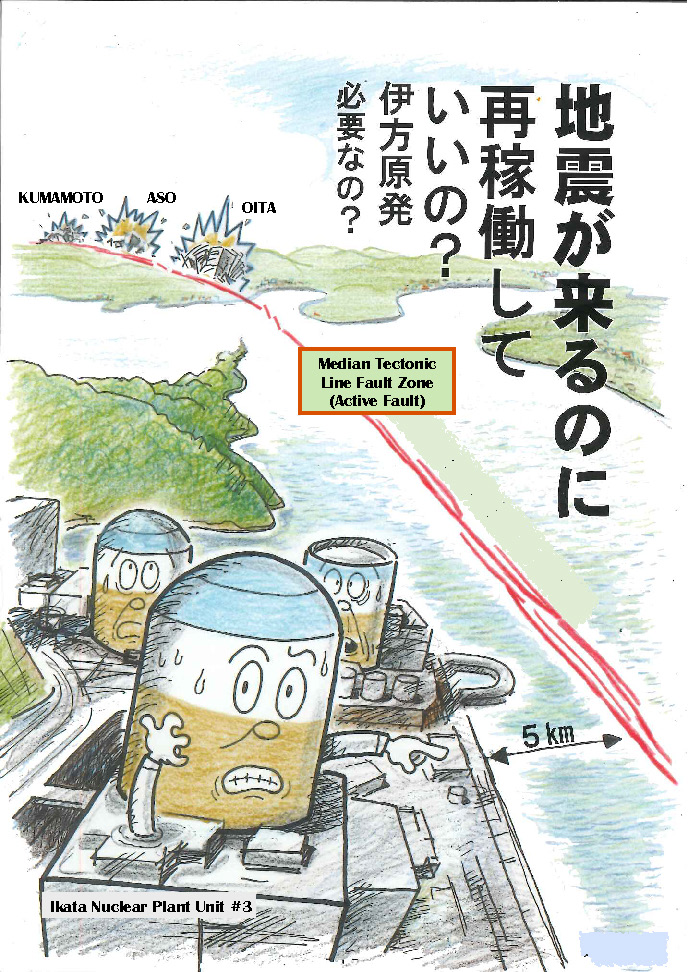 Illustration by Shoji Takagi: “Is it really OK to restart Ikata when earthquakes are coming closer and closer?”

On August 12, 2016, Shikoku Electric Power Co. (SEPC) restarted Unit 3, an 890-megawatt (MW) pressurized-water reactor (PWR) at its Ikata Nuclear Power Station (INPS) in Ehime Prefecture.  This nuclear power plant is situated in Ikata, the western-most town of Shikoku Island. It was decided to decommission INPS’s Unit 1, a 566-MW PWR, on May 10 this year, 38 years and 8 months after the start of operation. Unit 2 is also a 566-MW PWR, which had been operational for 34 years and 5 months as of the end of August 2016. The utility reportedly plans to restart this reactor but it has yet to apply for inspections to determine that the reactor complies with the new safety regulations formulated after the 2011 Fukushima nuclear disaster. Unit 3 is relatively new, 23 years and 8 months old, and its power output is 1.6 times greater than that of Unit 1 and Unit 2. For this reason, the utility has allegedly concluded that the 170 billion yen remodeling cost for meeting the new requirements will eventually be recovered if Unit 3 is brought back online. This amount is more than half the reactor’s original construction cost.