On February 9, 2022, Tokyo Electric Power Company Holdings, Inc. (TEPCO) and the International Research Institute for Nuclear Decommissioning (IRID) conducted a survey into the underground level of the primary containment vessel (PCV) of Fukushima Daiichi Nuclear Power Station (FDNPS) Unit 1, using an underwater remotely operated vehicle (ROV). The survey was intended to be a preliminary to investigating the conditions inside the vessel. The survey revealed that there were vast amounts of deposits, which were attributed to melted nuclear fuel, and exposed reinforcing steel, which appeared to be the skeletons of damaged concrete structures.

On March 14, the two parties started a close visual inspection along the periphery of the pedestal (reinforced concrete base on which the reactor pressure vessel was installed) with an ROV. However, on March 16, a serious earthquake of magnitude 7.4 occurred off the coast of Fukushima Prefecture. The water level in the PCV of Unit 1 declined due to the earthquake, and the inspection was suspended.

The two parties thereafter adjusted the water level by increasing the rate of water feed to the reactor, realizing the required water level in the PCV. On May 17, close inspection of the PCV interior was resumed using the ROV. The visual inspection was continued until May 21. The thickness of the deposits were also measured and thermal neutron flux measurements were conducted to learn whether the deposits were from nuclear fuel. It was confirmed that a major part of the deposits was from the fuel. 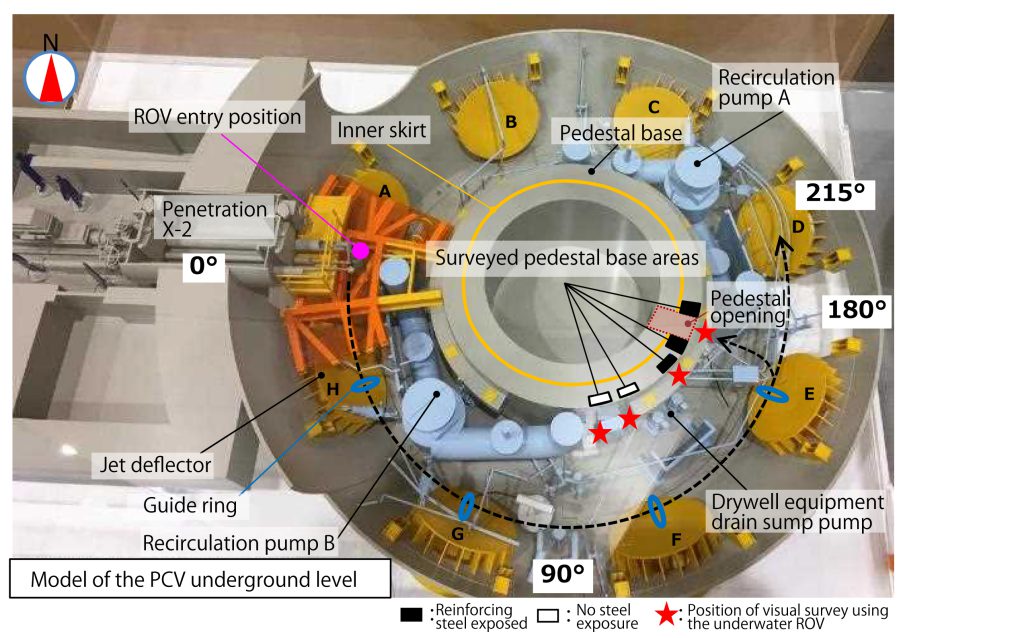 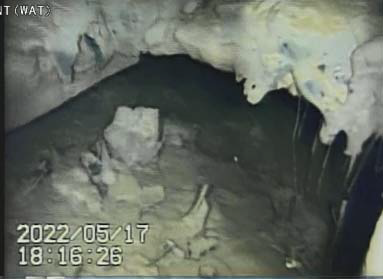 Photograph 1: Deposits in the containment vessel

The videos and photographs taken from the pedestal periphery show there are deposits that have accumulated deep on the PCV floor (Photograph 1). 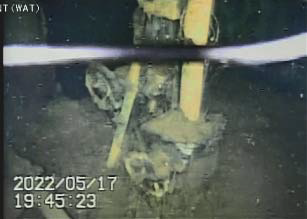 However, as those photographs show, the piping and valves of the reactor auxiliary cooling system are covered with deposits, while keeping their original shape. Especially, the greater part of the piping looks to be buried under the deposits, and it is unknown whether the piping is damaged or not (Photograph 2).

The valves and piping of recirculation system B do not look seriously damaged as far as the released videos and photographs show. The valves and piping of system A on the opposite side look vague, and it is unknown whether they are damaged or not. It seems possible that there is an anomaly in the proximity of the piping elbow near the pedestal opening.

The pedestal opening lies nearly halfway around from the underwater ROV entry position. Before the 2011 accident, operators entered the space below the reactor through this opening to inspect and maintain the control rod drive and neutron instrumentation.

Currently there is no concrete on either side of the pedestal opening, which must have been there before the accident. As the photographs show, the reinforcing steel skeletons are exposed, and deposits have settled on them (Photographs 3 and 4). The sheet-steel cylindrical structure called the inner skirt, built inside the pedestal, is also exposed. 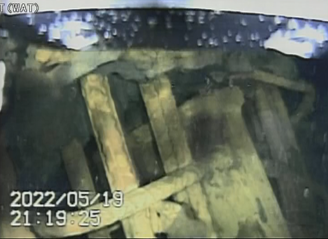 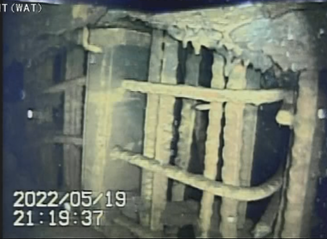 This means that, on both the sides of the opening, the originally 120-centimeter-thick concrete wall of the pedestal has completely vanished down to the height of about 100 centimeters from the base floor of the PCV. The data by TEPCO and IRID, as shown in Figure 1, indicates the approximate positions of the exposed reinforced steel, but we believe that these are not the only positions where steel is exposed. 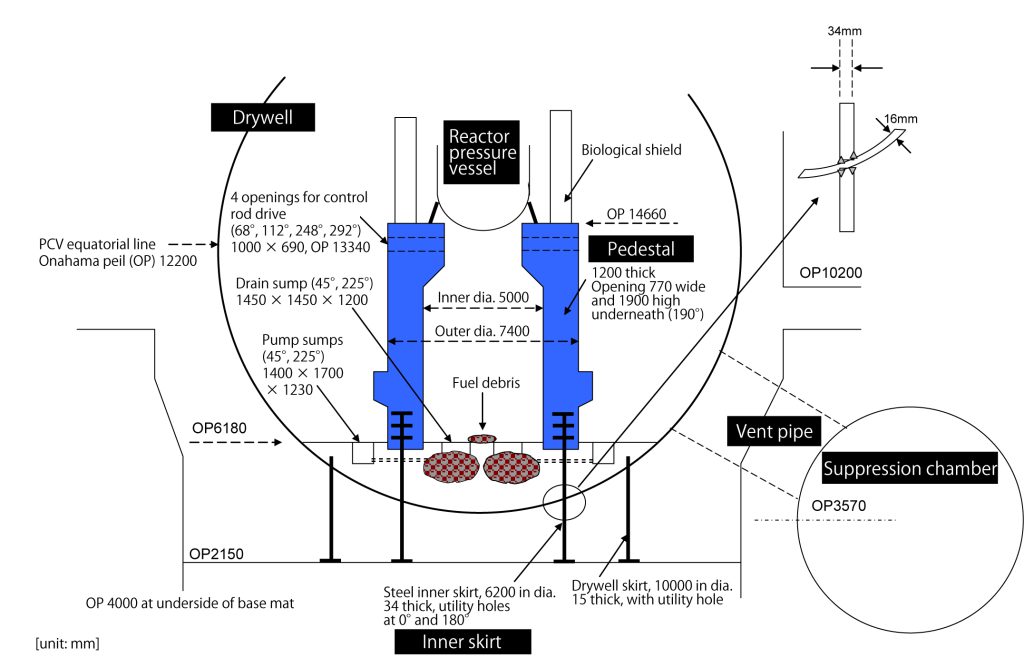 The Unit 1 pedestal and lower part of the PCV have the construction shown in Figure 2. The wall of the pedestal base is about 120 centimeters thick. According to the report of the Nuclear Regulation Authority’s investigative hearing with TEPCO, the inner skirt was originally buried in the pedestal base down to about the height of about 100 centimeters.

This means that, on both the sides of the opening, the originally 120-centimeter-thick concrete wall of the pedestal has completely vanished down to the height of about 100 centimeters from the base floor of the PCV. The data by TEPCO and IRID, as shown in Figure 1, indicates the approximate positions of the exposed reinforced steel, but we believe that these are not the only positions where steel is exposed.

How did the concrete vanish?

Concrete is produced from cement and aggregates such as sand and crushed stones, which are mixed with water and then solidified. Concrete and cement are known to have the following characteristics under elevated temperature (Kasami and Ohno, “Solid-state Properties of Concrete in High-temperature Ranges”).

The characteristics of concrete and cement under more moderate temperature changes can be explained as follows:

Melted nuclear fuel that consists mostly of uranium dioxide may reach 2,800°C. The melting temperature for concrete is about 1,200°C (which may differ depending on the amount of aggregates).

The core and concrete reaction analysis conducted by TEPCO in 2011 assumed that concrete erosion started when the temperature was at 1,500 K (approximately 1,227°C), concluding that the pedestal concrete floor was eroded down to a depth of sixty-five centimeters.

Did the melted nuclear fuel blow out from the bottom of the Unit 1 RPV, drop down to the floor inside the pedestal, spread over the floor, and attack the concrete wall of the pedestal, causing concrete flaking or explosive cracking? It is also possible that while such a process went ahead, the concrete, heated to 400°C through 700°C, became progressively weaker and fell apart little by little.

The reinforcing steel and inner skirt are not significantly deformed or melted as far as the videos and photographs show. However, the condition of other structures and to what extent the reinforcing concrete fell apart are also unknown at present.

Can the RPV tolerate a massive earthquake?

The loss of the concrete of the pedestal base presents a concern: The RPV, standing on the pedestal, may collapse or fall.

TEPCO, referring to the results of the RPV and PCV seismic assessment conducted by IRID in 2016, is extremely optimistic, stating that, even if a part of the pedestal is deteriorated or damaged, the pedestal can retain the function of supporting the RPV against an assumed earthquake, using the criteria at the time, of a ground motion Ss of 600 Gal.

However, a close examination of IRID’s assessment and TEPCO’s perspective show that their assumptions are overly optimistic. As an example, the model used for the seismic assessment is incorporated into the function of the containment vessel stabilizer and pressure vessel stabilizer, which control the lateral movement of the containment vessel and pressure vessel respectively, but the integrity of those stabilizers is unknown at present.

The TEPCO and IRID analysis concludes, based only on the observed ranges, that the reinforcing steel of the pedestal base does not show damage such as buckling, and that the function of the inner skirt has not deteriorated. The conditions used for the analysis lack discreteness. These conditions may change as the survey is continued in the future. As an example, greater damage in the concrete walls and floor may be discovered. In that case, completely different results may be derived from the seismic assessment.

References (all in Japanese)